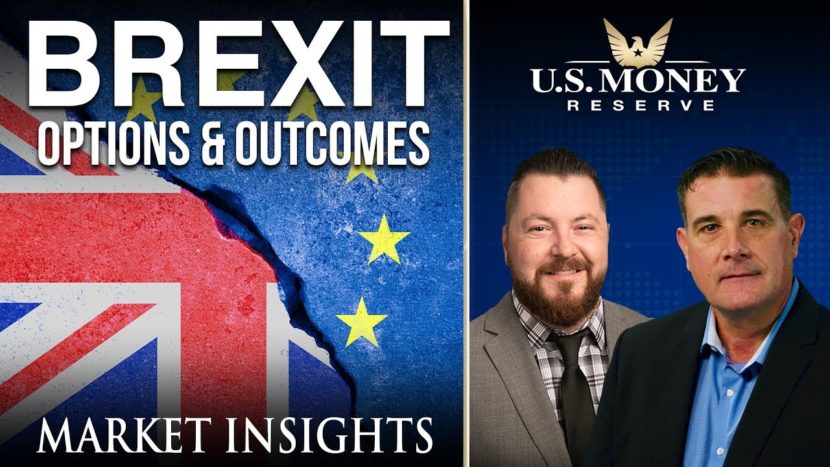 With Brexit’s deadline creeping closer, everyone’s wondering whether the U.K. will leave the E.U. with a withdrawal agreement, or be forced to leave without a real plan as to the conditions of their departure.

Today, we’re here with Mr. Patrick Brunson and we’re going to continue our segment in regards to Brexit and the overall impact of the deal that will or will not be made here in the upcoming months and what the cause and effect will mean to the United States. Mr Brunson is going to kind of give some details and we’re also seeing some new information as some of the individuals under Theresa May are currently starting to resign. Yeah, so one of the biggest issues right now with Brexit and what’s holding it up is actually Ireland. So most people aren’t real familiar with it unless you’re actually in the European Union. But the northern part of Ireland already belongs to the UK and the southern part is already part of the EU. And right now, they have what’s called a soft border.

So that means that people can freely come across the border very easily just if you were to cross from Texas and Oklahoma, for example. That’s been one of the biggest holdups because they’re trying to make an agreement where they can separate but not cause an economic upset between those two parts of Ireland. And bottom line is, if Theresa May cannot come to some sort of a deal that the EU is willing to accept, it can be real bad for Northern Ireland leaving the actual EU without any type of deal whatsoever. Now, compared to Greece, we know that Greece was taking place during the same time that the 2008 -2010 housing crisis here in the United States was taking place, and that had some ripple effects here in the United States. With the separation from the EU, how big of an impact would it actually have on the United States here? Well, Cypress, when that happened, I think it was like five or six years ago, it affected a lot of different countries. But that country in itself, I mean there were a lot of individuals at the time who lost anywhere from 30 or 40% of their money right out of their bank accounts to try and keep Cypress afloat.

Patrick Brunson: 01:52 If something major happens there, within the EU and the UK, and they cannot come to any sort of an agreement before the deadline next month, there’s going to be a financial crisis in some way, shape or form between the two. And it can have major ripple effects on the United States being that they’re one of our largest trading partners. Yeah. I think from my understanding is that they’re actually one of the fifth largest in the entire world. So that would carry a heavy economic consequence, not only to the United States, but to those countries as well. From my understanding, it would be equivalent to the from Texas moving away from the entire United States at the same time and shutting off all borders and creating our own entity and a wall around all of Texas without having the influx. And a lot of people don’t realize that Brexit is really driven because of the immigration reform that is taking place over there, that there is none.

If you have a working visa, you have the opportunity to free flow from any country without. And if you’re an immigrant coming in, it’s free flowing as well. So that’s one of the reasons why there’s some turmoil over there. This is a lot of information. We’ve talked about it for the entire week and there’s a lot of consequences that are taking place in regards to the economy here in the United States as well as over there. Currently, there is no deal and it looks like they’re most likely going to probably end up with a no deal exit, which would probably be the hardest one. That’s the billion dollar question right now. Yeah. So there are some consequences. The consequences ultimately for the United States is, is that could make the U.S. dollar stronger. But, it also makes exports and imports a lot more expensive for foreign countries, which may not necessarily be good for countries or the United States long term.

Right now, it would also mean that the stocks that were being purchased by other countries, primarily the EU, would be more expensive as well if that happens. So click on the link below to download or latest report, ‘five worst things to do with your money’. You can also get a copy of all of our other reports if you click on the link for our resource library. If you’re watching us from YouTube, subscribe to our channel so you don’t miss a single episode. For U.S. Money Reserve, I’m Coy Wells. I’m Patrick Brunson, and thank you for watching USMR Market Insights.