Aztec Gold: Did You Know? 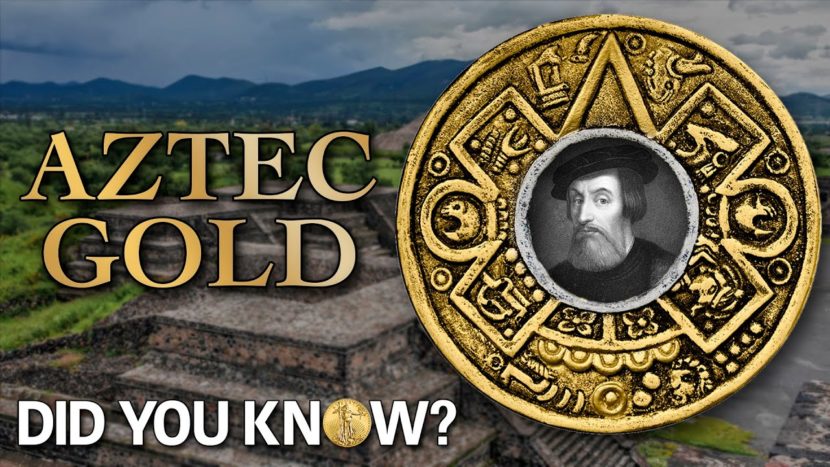 When Cortés and the conquistadors arrived in Mexico, they were enraptured by the gold treasures of the Aztec civilization. Determined to get their hands on it by any means necessary, the Spaniards employed everything from deceit to bloodshed. If you’re interested in learning more, watch today’s episode of U.S. Money Reserve’s “Did You Know?”

Spanish conquistador Hernan Cortéz landed on the Mexican coast in February of 1519 and embarked on his journey to acquire land and riches. He began receiving treasure from Aztec emissaries in a show of ally ship even before setting foot at Tenochtitlan, the Aztec capital. In addition to treasure, the Aztec King, Montezuma, sent the Spaniards gold dust after the sly Cortés tricked him into believing gold was the only cure for a Spanish illness. The Aztec empire's extravagant use of precious metals, gem stones and feathers beguiled the Spanish conquistadors when they arrived in the city. The Aztecs valued using gold for plates, ornaments, medals, and other decorations. Cortéz eventually imprisoned the King who openly told him where to find gold in the region. Although Montezuma discouraged it, violence inevitably broke out in the city. On June 30th, 1520, the Spaniards decided to withdraw with all their loot. They loaded themselves with treasure and quietly trudged their way out until Aztec warriors caught them and descended upon the Spaniards and their allies.

Many of Cortéz's men were weighed down by their loot and fell into Lake Texcoco while others ran too slowly to escape. This night became known as the Night of Sorrow. In the following year, the Spanish army rebuilt themselves and overtook Tenochtitlan successfully, marking the downfall of the empire. Almost all the gold recovered from the city was melted into bars, losing the cultural significance of the original Aztec artifacts. In spite of this, some lost treasure from the Night of Sorrow has been recovered in modern day Mexico City. Call the number on your screen if you'd like to learn more about gold's place in history and gold's place in your portfolio. Make sure to subscribe to see more of our videos on various topics.