View cart “1 oz. Gold Bar (Various Mints)” has been added to your cart. 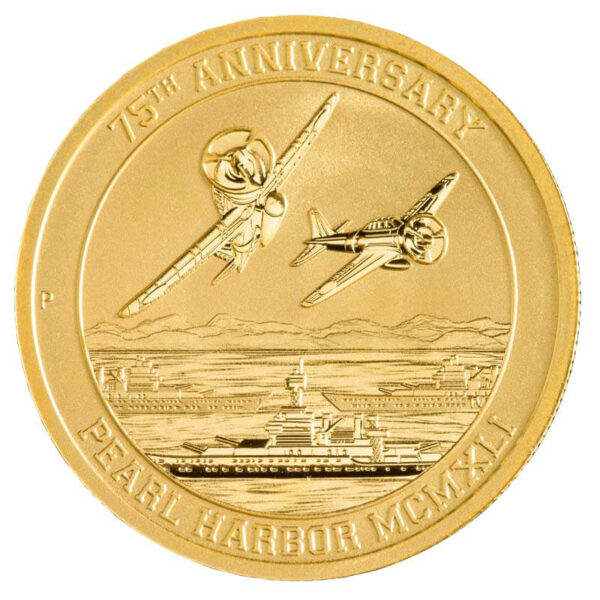 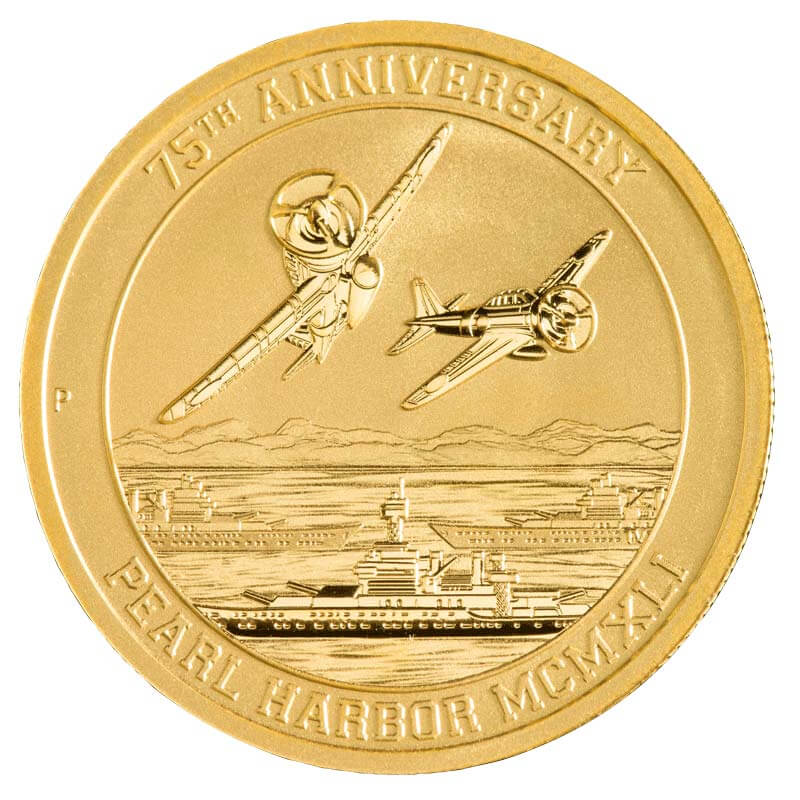 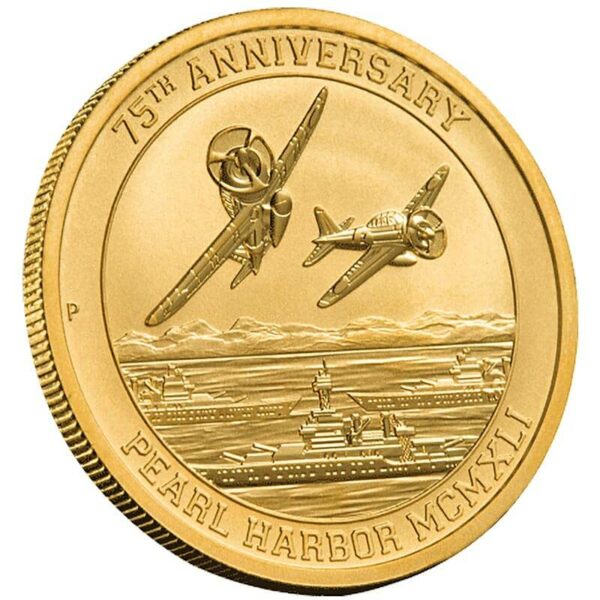 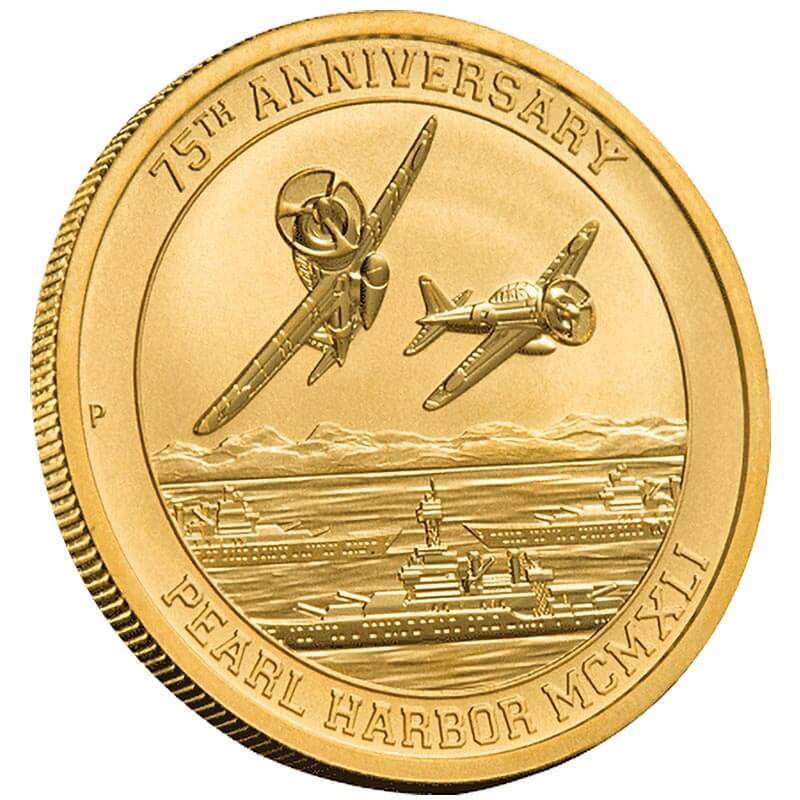 SOLD OUT!    The 1 oz. Pearl Harbor Gold Coin pays tribute to one of the most prolific moments in world history—the attack on Pearl Harbor and our country’s official entry into WWII. Exclusively available only through U.S. Money Reserve, this limited-production gold bullion coin is a unique 24-karat coin authorized as official legal tender.

Nothing less than the highest gold purity possible—.9999 solid gold—will do when it comes to recognizing one of our nation’s most influential events. That’s why the 1 oz. Pearl Harbor Gold Coin is crafted with this precise level of purity. Paired with a minting process that brings history to life, the 1 oz. Pearl Harbor Gold Coin is an ideal purchase for anyone who appreciates tangible wealth, the power of gold, and America’s storied history.

Simply put, gold trades easily and has long been heralded as one of the most distinguished forms of currency. The 1 oz. Pearl Harbor Gold Coin is no exception. The weight of this solid gold coin, coupled with gold’s current market price, continues to buoy its global appeal. Enhancing that appeal is the fact that Pearl Harbor Gold Coins offer a high level of financial liquidity and portability.

The statue, designed by Stanley Bleifeld, stands guard over the U.S.S. Arizona Memorial erected in honor of the bravery displayed during the December 7, 1941 attack on Pearl Harbor. It calls upon the timeless values of the U.S. Navy: honor, courage, and commitment. The base of the statue contains steel from the U.S.S. Arizona.

A portion of the proceeds from every Pearl Harbor Coin sold continue to be donated to the U.S. Navy Memorial Foundation.

The 1 oz. Pearl Harbor Gold Coin is a masterpiece of artistry, commemoration, and purpose, and it is available only through U.S. Money Reserve, America's Gold Authority®. Each coin comes with a Certificate of Authenticity.

U.S. Money Reserve guided the creation of the Pearl Harbor 1 oz. Gold Coin alongside Australia’s Perth Mint, a government mint and one of the most established and trusted names in coin production.

U.S. Money Reserve is now one of only two coin companies in the entire world to sell exclusive, legal-tender gold coins like the 1 oz. Pearl Harbor Gold Coin.

The obverse honors our wartime Allies, Australia, and Great Britain, with an official portrait of Her Majesty Queen Elizabeth II. The confident striking of this solid gold coin adds a realness to the pride and resolve evident on the Queen’s face.

The obverse design also features the monetary denomination (100 dollars) and the year of issue (2016), which marks the 75th anniversary of the attack on Pearl Harbor.

It’s the scene that set the stage for America’s entry into WWII and a victory that dispatched Asian and European aggressors bent on global domination and carnage. During the attack on Pearl Harbor, more than 15 U.S. naval ships and 188 U.S. aircraft were destroyed, and 2,403 American military and civilians were killed, while 1,178 others were wounded.

The reverse side of the 1 oz. Pearl Harbor Gold Coin also features the mint mark, P, for Perth Mint, and the inscription, “75TH ANNIVERSARY PEARL HARBOR MCMXLI.” The Pearl Harbor Coin Series is the only Roman numeral dated series the Perth Mint has ever produced.

"Seas" the day with a retirement strategy that's personally meaningful and even patriotic. Incorporate IRA-approved gold coins and bars into your Individual Retirement Account through a Self-Directed Precious Metals IRA. IRA-eligible gold must meet a set of requirements set forth by the Internal Revenue Code. 1 oz. Pearl Harbor Gold Coins meet these requirements.

Pearl Harbor Gold Coins are one of many IRA-eligible gold coins. Call to learn how you can secure retirement funds through U.S. Money Reserve's Gold Standard Precious Metals IRA program.

How Much Do 1 oz. Pearl Harbor Gold Coins Cost?

Where Can I Buy 1 oz. Pearl Harbor Gold Coins?