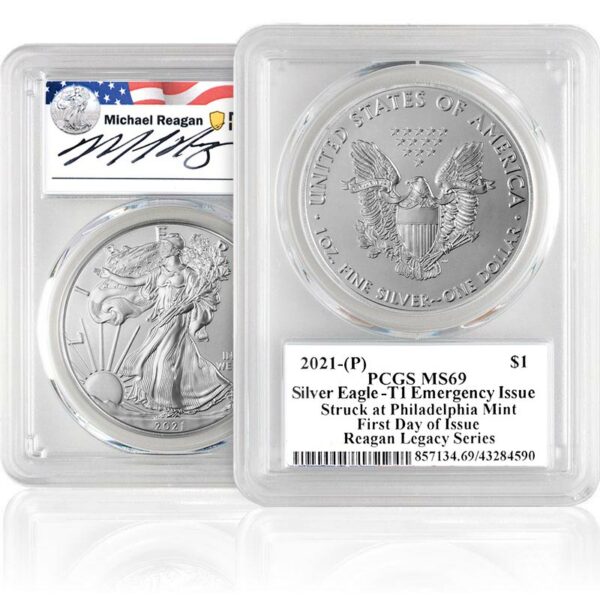 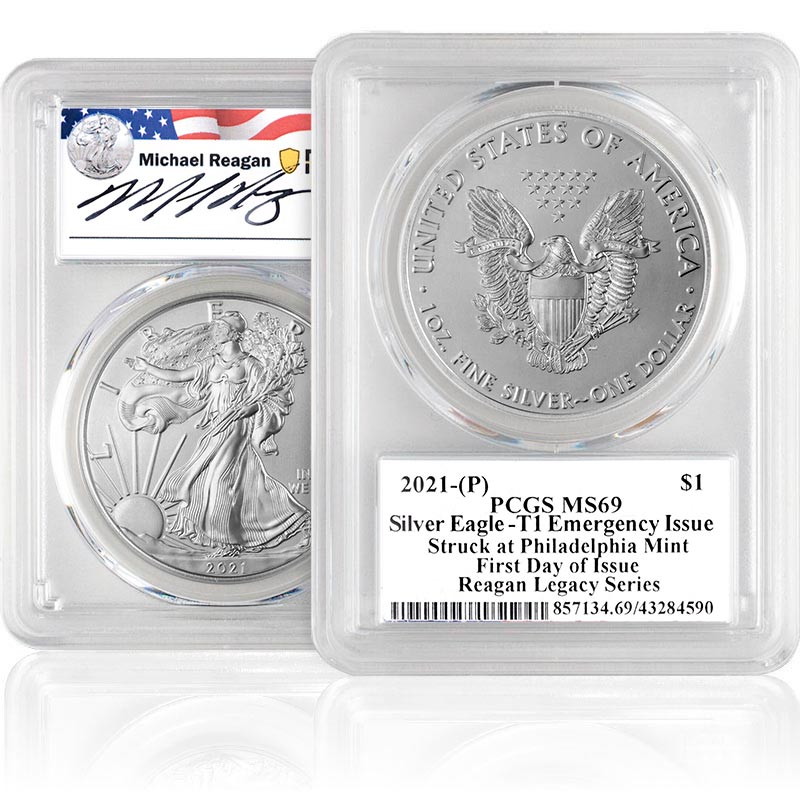 PRIVATE SALE: OUR LOWEST PRICE EVER!

Due to overwhelming silver demand and global supply shortages, the United States Mint authorized an emergency production run of 2021 Silver American Eagles at the Philadelphia Mint. This 2021(P) “Emergency Issue” Silver Eagle features one of the final appearances of John Mercanti’s iconic eagle reverse design and is graded MS-69 and certified with a PCGS specialty label hand-signed by Michael Reagan. This is an exclusive, private offer for select customers only!

The Silver American Eagle is the best-selling silver bullion coin in the world, with millions of coins normally struck each year. Featuring a reverse design crafted by John Mercanti, former Chief Engraver of the U.S. Mint, and an obverse design taken from Adolph Weinman’s classic “Walking Liberty” Half Dollar, the original Silver Eagle is both an American icon and a popular entryway into the world of precious metals. In 2021, the reverse design was replaced for the series’ 35th anniversary. The 2021 Silver Eagle represents the final year of issue of the original design. Each coin contains one ounce of 99.9% pure (.999) silver and has a U.S. legal-tender face value of $1. Additionally, each coin’s weight, precious metal content, and purity all come guaranteed by the U.S. government. Each coin is certified near-perfect MS-69 by PCGS.

What Is an “Emergency Issue” 2021(P) Silver American Eagle?

Silver Eagles are typically minted at the West Point Mint. However, soaring demand and constrained supply levels forced the U.S. Mint to strike special 2021 Emergency Issues from the Philadelphia Mint! Normally, there would be no way to tell a Philadelphia-struck Silver Eagle from one struck at West Point, as bullion Silver Eagles feature no mint mark. However, thanks to the PCGS designations of “Struck at Philadelphia” and “Emergency Issue,” you can now own one or more Silver American Eagle coins guaranteed to be among those certified as coming from this special mintage. In addition, each coin has been certified as “First Day of Issue” and sealed with an exclusive specialty label hand-signed by Michael Reagan, son of President Ronald Reagan. President Reagan authorized the very first Silver Eagles during his presidency over 35 years ago. This release is exclusive to U.S. Money Reserve, and is being made privately available only to select customers. Only a limited number of coins are a part of this private population. An immediate sellout is expected.

History of the Silver American Eagle

During his presidency, President Ronald Reagan had a vision of an America where citizens could find financial freedom and stability through the purchase of official U.S. precious metal bullion coins. On July 9, 1985, he signed the Liberty Coin Act into law, authorizing the U.S. Mint to strike the first American Silver Eagle coins. In the 35 years since, the Silver American Eagle has become the world standard for legal-tender silver coins.

The Last Year of Issue of the Original Silver Eagle Design

From 1916 to 1947, Lady Liberty walked proudly along the face of America’s Half Dollar coins. Crafted by Adolph A. Weinman, “Walking Liberty” remains one of the most beautiful coin designs ever struck by the U.S. Mint. Draped with the American flag over her shoulders, Liberty proudly strides forward, reaching out to the future as the run rises in the background. Her name, LIBERTY, is displayed prominently along the circumference of the design.

The design from which the coin takes its name comes from John Mercanti, 12th Chief Engraver of the United States Mint. Eagles have been prominent figures in official seals, flags, and emblems for hundreds of years, but rarely have they been produced with such detail and presence as they have on the Heraldic Eagle reverse of the Silver American Eagle. An interpretation of the Great Seal of the United States, Mercanti’s eagle spreads its wings to either side while carrying both an olive branch of peace and the arrows of war clutched in its talons. In its beak, the American eagle carries a banner with the traditional motto E pluribus unum—“Out of many, one.”

For this exclusive private offering, the 2021(P) American Silver Eagle PCGS MS69 Emergency Issue Struck at Philadelphia First Day of Issue Reagan Legacy coin is being offered for our lowest price ever—only $57.00 each. However, this offer is available for a limited time only, and supplies are limited, so you must ACT NOW to take full advantage of this incredible offer.

The coins included in this offer come certified by PCGS as near-perfect MS-69. In addition, they bear multiple designations, including “Emergency Issue,” “Struck at Philadelphia,” and “First Day of Issue.” Finally, they are sealed with the exclusive PCGS specialty Reagan Legacy label hand-signed by Michael Reagan. This release is exclusive to U.S. Money Reserve. Out of the original number of coins struck as part of this emergency production run, only an extremely limited number of coins have received these special designations, near-perfect grade, and specialty label. We expect a swift and total sell-out of this exclusive private population. Don’t wait for these historic coins to disappear—hurry and order yours today!