What If China Stops Buying Our Debt? 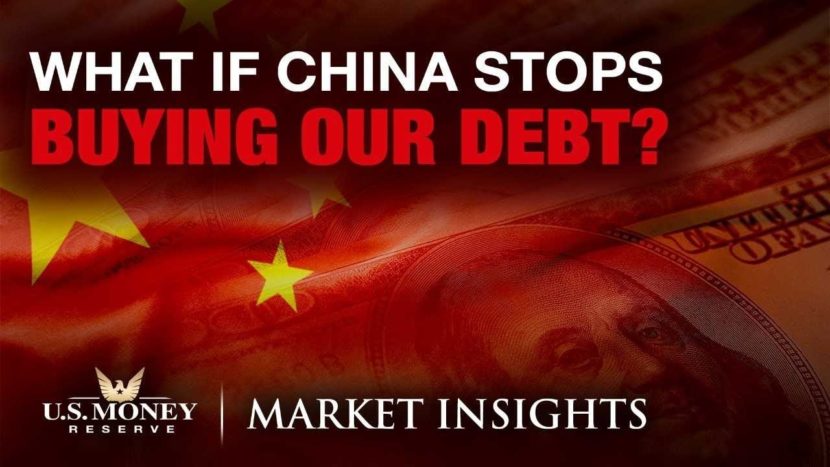 The trade war continues to heat up between the world’s two largest economies, making investors and analysts nervous about its effects on an already fragile global economy. As the largest foreign owner of U.S. Treasuries, China arguably holds the biggest trade weapon of them all: its ability to dump significant amounts of U.S. debt. Learn what this could mean for the U.S. economy and more in this episode of USMR Market Insights with Patrick Brunson.

What If China Stops Buying Our Debt? – Video Transcription

The U.S. debt has been a big topic of discussion this week in the mainstream media. Republicans and Democrats have been meeting to come to an agreement to once again raise the debt ceiling and kick the can down the road. But the part that's most important, that people don't really seem to understand, is the fact that we can raise the debt ceiling all we want, we can even do away with it entirely, but we still have to have entities that are willing to buy our treasuries and loan us the funding that we need to operate. This is probably the most important part, but also the least understood by most consumers. For years, we've been going into massive debt by selling treasuries to foreign countries like China, Japan, and Russia. At this point, foreign countries now own more than 40% of our debt. In fact, China alone owns more than a trillion dollars’ worth, but the question that lingers is will they continue to buy?

If China really wants to shake up the trade war by selling off a vast accumulation of U.S. Treasuries, it has the power to do so. However, the signal that would send would give the markets a massive disruption being that they do not like any form of geopolitical uncertainty, and the decline in demand could have a deeper effect on interest rates in the economy as a whole. Given how much debt we already owe, just 1% increase in interest rates would cost the U.S. around $180 billion a year in additional interest payments alone. That's roughly the entire budget of the U.S. Army, so we have to start paying attention to what countries are starting to do with their U.S. Treasuries, because over the last few months, many of these countries have been actually dumping them, not buying them. This is not a good thing for a country that is about to go into an election year with the recession at its doorstep.

We've actually seen Russia alone dump more than $80 billion worth of U.S. treasuries, which is basically their entire holdings. China's dumped over $200 billion in recent months, but the media has been fairly quiet about it. Over the past few years, the share of treasuries owned by foreign countries has dipped with no noticeable response. Furthermore, it would leave China with fewer attractive options for where to park all their money should the U.S. enter a recession. We are redefining our relationship with a powerful nation who is far better at playing the long game than we are, and frankly, we don't know what short term sacrifices they might be willing to take. We also don't know whether China will go as far as to weaponize their treasury holdings or not. Just a discussion of these scenarios shows that we need to be much more vigilant when it comes to our weaknesses when negotiating with other countries and our national debt is one of the biggest weaknesses that we currently hold.

It's not a comforting thought to know that countries like China hold this type of power over the United States and many believe that this type of weapon is much more dangerous than any type of nuclear weapon or army. In light of all this information, I urge you to take action today by getting U.S. Money Reserve's In Debt and Out of Time report. It has a lot of really good, in-depth information in regards to long-term wealth protection and the value of your dollar over time, and what you can do to help better protect your portfolio. So please call the number on your screen or click on the link below to get your copy today. Feel free to comment and share this video if you find this information useful. If you're watching us from YouTube, please subscribe to our channel so that you don't miss a single episode. I'm U.S. Money Reserve's Patrick Brunson, and thank you for watching Market Insights.