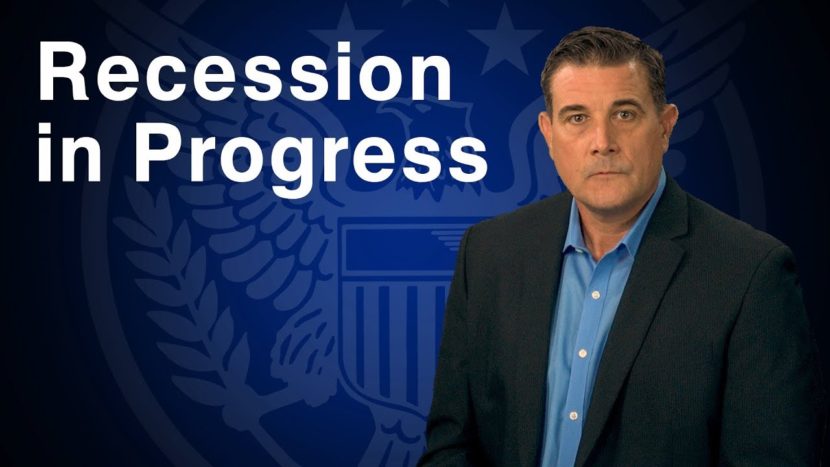 In this episode of Market Insights, watch and listen to U.S. Money Reserve's Coy Wells talk about the 3 key indicators that determine whether we are in a recession of now.

Good morning and thank you for watching daily market insights. Today we're going to kind of piggy back off of what Mr Brunson talked about last week and those are the three key indicators of whether we're in a recession or not. Those three key indicators that Mr Brunson talked about was one the tax cuts. That's a stimulus program that helps put in additional income back in the United States as well as trying to draw companies back in to the country to bring up the GDP. Number two, we talked about the repeal of portions of the Dodd Frank Act. That means we've allowed the mid level banks here in the United States to kind of open up the flood gates to those who normally would not be qualified for home loans and additional loans that are out there. And then the third thing, Mr. Brunson talked about is the tariffs. We've not seen the level of tariffs that we've placed on other countries uh, that are out there since really about 1913. And if you remember several weeks ago, we talked about tariffs and the misappropriation of interest rates is what caused the great depression.

These are tools and items that we'd normally would use in the United States to help get us out of a recession. And we're now at a point where if we start falling into a recession, that some economists are telling us are right around the corner, we may not have additional tools to help get us out of that scenario if it happens again. This morning we got the report that jobs are not where they need to be, meaning unemployment is increasing and the production in the United States is down. Now we're sitting at about 4%, which is not doing as well as they expected it to be. That means that GDP is going to be in trouble. If you remember in the beginning when we started this program over a year ago, one thing we talked about is that the GDP of the United States was in trouble because we had to start pulling back on the amount of treasury bonds that we were selling and interest rates would play a role into that.

These are just common indicators that sometimes become difficult as a consumer to understand. As we are consumers, sitting back in the chair watching TV, watching Fox business news and trying to interpret really what's happening financially here in the United States, It's hard to take that information and decipher into what's actually going to happen to my money. In Layman's terms folks, what I wanted to just stress to you is that there's a ton of volatility. How much volatility is in the market? It's hard to understand how rocky and how volatile it really is because you're seeing snippets on a daily basis and really taking it from a long perspective and that's what I want you to think about. The stock market on a one year term, meaning that over the course of 12 months we will see the stock market move up and down and fluctuate on a daily basis. But for it to move 600 points in one day,

only happens on average about five times a year. In the last 90 days, we've seen the stock market move 600 point intervals to roughly 30 times, right at 30 times, not quite 30 times. We're seeing the stock market do what it does right before we see a massive correction. You have to understand that right now our money is a very, very vulnerable point. We saw Morgan Stanley, one of the largest financial firms on planet earth, sent out a letter to their consumers and talk about some of the things that we're talking about now, talking about how the market is at it's end and that they don't believe it can go any higher and at the end of their report they talk about how the United States may be entering what they call austerity measures. When you start seeing financial firms use the term austerity measures does, that means the government is at a point where they've exhausted their resources.

They're going into critical point of where they're going to have to start using drastic measures and that's the concern we have to have. Ron Paul, who is the former presidential candidate and congressmen, is saying that he believes that we could see a 50% withdrawal in the stock market. In the course of the last 60 days, we've counted more than 20 or 30 to 40 news sources, credible news sources talking about how the market will see anywhere from 30 to 50% adjustment this year. Okay. If they're half wrong, even with the information being half wrong, that is absolutely catastrophic for anyone who is retired at this juncture of the game. We are still in the process of trying to recover from 2008 that should have taken the United States to a further recession than it did and it was shortened because we printed $4 trillion. When you print $4 trillion and you stimulate the economy with that type of income, you're falsely doing it and when you falsely manipulate an economy that is already on fragile ground, at some point in time somebody has to pay the piper.

What I can assure you is that countries outside the United States, and we've talked about many of them, have been preparing and they're still preparing today and they're preparing at severe levels. This is a point in time where your money, our money that's sitting in the market, sitting in 401k's and sitting in IRA's, is at one of its most crucial points. Those who are retired do not have the luxury or the ability to go back to work because the job or the labor force that would be there for us normally if we were younger, is not going to be there. The signals and the signs are there. What I would encourage you to do, like we've encouraged you to do on a more frequent basis, is go out and get some newspapers. Start looking at some of the sources that you're not going to get off of the news

that's talking about the FBI scandal where the Russians were involved or whether Obama did this, were Hillary did that. You need to start grabbing a newspaper and start reading the Wall Street Journal. Start looking at Bloomberg News. Start looking at CNBC news, CNN news, some of them early morning will give you the best information. As the day goes on, past 10 o'clock, all you're going to get is all the stuff they want you to hear. The most critical information is being put in newspapers or being gathered up first thing in the morning where most people are not capturing it. As always, thank you for watching daily market insights. Hope this was helpful. Watch out for inflation. Inflation is starting to set in. It is starting to creep up and the cost of goods and services are starting to get higher. That is also a telltale sign that the value of the dollar is starting to creep down and companies and corporations are going to start raising the prices to make up for the difference.

Also, click on the link below or call the phone number and get your free copy of daily market insights. We've talked about this. This will also help you understand what's taking place inside your own state. This will kind of give you an indication of what the states are doing with your pension plans. Your pension plans are also a telltale sign that each state inside the United States may not be doing as well as you think. Ask for your free copy. Again, click on the link or give a phone call and also you can leave a comment in the comment section. As always, thank you for watching daily market insights and we look forward to talking to you later on in the week.