Can This Tool Identify the Next Recession? – USMR Market Insights 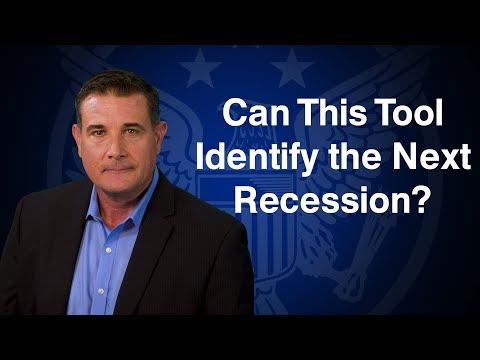 Can This Tool Identify the Next Recession? – Video Transcription

Hello, my name is Coy Wells with Daily Market Insights and U.S. Money Reserve. Last week we talked about the falling oil prices and how the oil price could be an indicator of a recession. As we discussed last week, it's unusual to see the oil prices pull back going into the summer after school break. Typically we see oil prices increase. The other thing that we're going to talk about today to kind of confirm what we discussed last week is another facet of the stock market, and that would be the Shiller index. The Shiller index measures the PE ratios and the inflationary rate of stock value.

Let me kind of explain what that means: this is the price to earnings which most consumers are accustomed to and understand what that is, but this is the inflationary rate of the PE ratio is rising in the economy against the stock market. It tells us in most cases that the earnings of the company are not doing what the stock value should be doing. A key example of this would be let's use Apple computers, uh, as an example. Nothing against Apple computers, great company, great organization, and a company is fixing to set a record in the stock market, but let's assume that Apple computers is doing well and their earnings are solid. Ultimately, with that being said, their stock value should be increasing, but if Apple computers is doing poorly, the adverse of that would be happening, meaning that their stock value would be going down.

Their Shiller index picks up when there's something wrong when something is not happening correctly, and what that means is that if Apple computers in the earnings, hypothetically were doing poor and their stock value was still going up, that's when the Shiller index kicks in. That's when it starts measuring the inflationary rate of stock value. The Shiller index were put together by a gentleman by the name of Robert Shiller who was a Nobel prize winner. It has gone back in history and been able to identify not only the Great Depression under the Shiller index, but it's also been able to identify 11 recessions since then, including 2000 and 2008. The question now becomes, is the stock market overvalued? Going back over six months ago, we talked about the Shiller index and exactly what it means, very similar with what we did today. Right now, the Shiller index is sitting at 33.13. To put that in perspective, when we started talking about the Shiller index over six months ago, it was between 25 and 27. It moves every day just like the the Vix report will do or the Vix index would do.

Right now, the Shiller index is sitting at a point in history today, right now at 33 point 13, the Great Depression hit a level of 30, in 2008, it was around 17. This is the second highest, against 1929, ever recorded in U.S. history. It tells us that in conjunction with raising interest rates in the sell off of U.S. treasury bonds and some of the other things that are taking place that we've talked about over the last six months is increasing, the risk in the stock market is continuing to grow. That bubble is increasing, as we've talked about over the course of the last six months to a year. The indicators that are out there are ultra important to understand, and we've talked about this time and time again and I know we've talked about recessions and we've talked about depressions, but so are all the other economists that are out there. Most are saying that it can happen at any point in time that from now until 2020, but we also understand that most consumers understand that right now we're sitting at a market that is at the longest we've ever seen in history. We've never seen what we're seeing happen right now. We're also seeing negotiations take place with Trump and North Korea as we're cutting this video right now. That means that the market can sway left and right because of that.

Small political or big political issues in the market should not be able to sway the market in large sums like we've seen in the past, which we've also talked about. For those who understand the Shiller index or those who don't understand the Shiller index, you can look it up on http://www.multpl.com/shiller-pe/, you can just type that in and your google search bar and it'll pull up. Click on it, it should be the first search engine that you look at. When you look at that, you'll see a graph there and that graph will go back all the way to the beginning when the stock market happened until today, and it will give you a clear indication of what kind of bubble that the U.S. economy is sitting in. The thing that you have to understand is that why don't most people know about the Shiller index. Your broker, I can assure you that he knows about the Shiller index and your financial advisor also knows about the Shiller index. These are key components that they use to help them understand what risk is involved in a stock market, your brokers and most likely telling you to put more into the market.

As the market is at risk, the more money they're going to want in there to keep it alive and some of the stuff that we're seeing take place that we discussed like the repeal of the Dodd Frank Act. This is an influx of cash that they're looking for to help support a market that was beginning to become stagnant. We saw several months, or about a month's worth of time where the stock market just flat there, and that was about the last month is when that took place. For more information about what we're talking about, call the phone number on the screen to get additional information about what we've talked about today, we have the 2018 Annual Gold Global Forecast. This will also give you additional information in regards to the information we've talked about for about the last six months to a year. There's a lot of really good information in here and again, I'd encourage you call the phone number on the screen there and as always, thank you for watching Daily Market Insights.