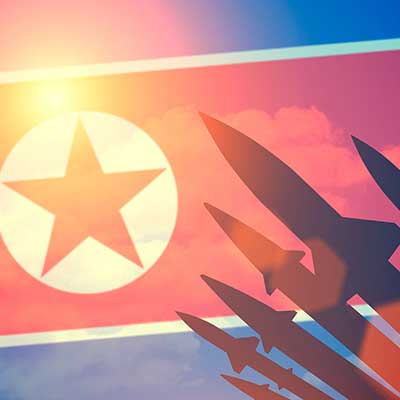 GOLD: If not NOW, then WHEN?

Throughout history, gold has functioned as the world’s de facto safety net. It thrives in tough economic climates and has proven to be a reliable and predictable hedge against rising inflation, volatile stocks, a deepening recession and a weakening dollar.

Some of gold’s greatest price surges tell a familiar story of debt, inflation, devaluation and uncertainty:

So far in 2017, gold is up just over 12% and we’ve have been hearing a lot about geopolitical uncertainty. What does this mean exactly? Clearly it is the confluence of geographic and political factors that contribute to world instability. Simply stated, there are several regional danger zones that could very well tip us into a full blown international crisis. These hot beds of volatility are not only a threat to world order and global markets, but pose a very real hazard to your portfolio.

While we face multiple global flashpoints, none are more dangerous than North Korea and Syria. North Korea continues to defy all UN Security Council resolutions by testing multi-range ballistic missiles. These are high trajectory missiles ultimately intended to deliver warheads. There is also evidence that they have restarted their nuclear facility at Yongbyon, which is thought to be pivotal in their desire to weaponize plutonium. In addition, tests carried out on a rocket launched back in 2012 indicate that North Korean missiles now have the range to hit multiple countries including the United States. The situation has escalated to such a dire level that President Trump has not ruled out a preemptive strike.

Syria is another political Pandora’s box. In an effort to defeat terrorism and rebellion uprisings, President Bashar al-Assad has committed unspeakable crimes against humanity. He has overseen a dark regime of mass executions, hangings, starvation, torture, the use of nerve agents, and toxic chemical gases that have killed scores of civilians including women and children. His munitions stockpile contains the world’s most ruthless weapons which he has routinely used on civilian targets, including hospitals. With a Tomahawk missile attack on Assad’s airfields and weapons facility earlier this month, President Trump enforced the ‘red line’ set by President Obama back in 2012. In a strategic and logistical alliance, Russia and Iran have both heartily backed the Syrian leader and established their own ‘red line’ vowing to respond with force if the U.S. crosses it.

It simply doesn’t get more perilous than this. Add the uncertainty of domestic Tax Reform and Health Care along with the ticking of the Debt Clock and the stock bubble—and it begs the question … If you don’t buy gold now—then when?