Why Is the Current Gold-to-Silver Ratio Breaking Out?

Home » Gold » Why Is the Current Gold-to-Silver Ratio Breaking Out? 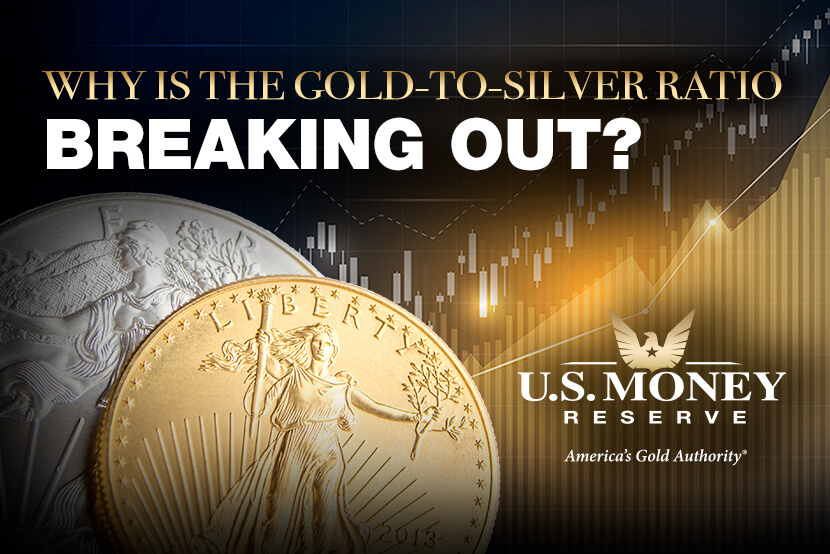 The year was 1993. Michael Jordan had hung up his Air Jordan sneakers and retired from basketball. Jurassic Park was dominating the box office. And Seinfeld was still ruling the airwaves.

What does the end of this 26-year streak mean for buyers of precious metals? Learn what might be causing this breakaway in the current gold-to-silver ratio and what you can do in response.

What Is the Gold-to-Silver Ratio?

Before we dive into the effects of a changing gold-to-silver ratio, let’s briefly go over the meaning of this ratio.

To come up with the gold-to-silver ratio, the price of gold is divided by the price of silver. That math indicates how many ounces of silver you’d need to buy an ounce of gold. A higher ratio signals that it costs less to buy silver than gold.

According to Banyan Hill Publishing, the average gold-to-silver ratio since January 1990 has been around 65. This means it would take about 65 ounces of silver to buy 1 ounce of gold.

In early July, the ratio surpassed 93, meaning it now takes 93 ounces of silver to buy 1 ounce of gold. The ratio doesn’t stand still, though. It fluctuates from day to day. On July 22, for instance, the ratio hovered around 87.

What’s Happening with the Gold-to-Silver Ratio?

When the gold-to-silver ratio spikes, it translates into silver being more favored as an asset than gold. When the ratio goes down, though, gold often becomes the preferred precious metal.

As silver has flirted with the $16-an-ounce mark this summer, some folks are shifting their assets around to make room for more silver because the gold-to-silver ratio has been tilting toward silver—making it more attractive from a price standpoint.

“We were overdue for a rally in silver, as the gold-silver ratio was sitting near historic highs,” Chris Gaffney, president of world markets at TIAA Bank, told MarketWatch. “In short, silver had some ‘catching up to do,’ as it was left out of the overall rally in precious metals during the first half of 2019.”

Peter Spina, president and CEO of GoldSeek.com, told MarketWatch that silver had lagged far behind gold for several years. Gold’s gains thus far in 2019 have helped to “light a spark under the silver price,” he noted.

Among the factors that can influence the gold-to-silver ratio are:

How Can You Take Advantage of the Gold-to-Silver Ratio?

However, the gold-to-silver ratio shouldn’t be the only data point you weigh when contemplating gold or silver purchases. Instead, it should be one of several tools you use to guide your decisions. For instance, it’s helpful to figure out how gold or silver purchases fit into your overall portfolio goals, especially in the context of current and projected economic performance.

Our Resource Library is the place to go for all of this information and more. The Library includes comprehensive, easy-to-understand reports about generational wealth, the next recession, gold IRAs, the power of precious metals, and so much more—all for free.

Whether the gold-to-silver ratio is high or low, you can always call U.S. Money Reserve to discuss the ratio of gold and silver in your precious metals portfolio. A balanced, diversified portfolio can help you remain resilient when the markets take a turn. Call 1-844-307-1589 for a one-on-one consultation with an Account Executive.