Who is Adolph Weinman? Meet the Man Behind Walking Liberty

Home » Coins » Who is Adolph Weinman? Meet the Man Behind Walking Liberty 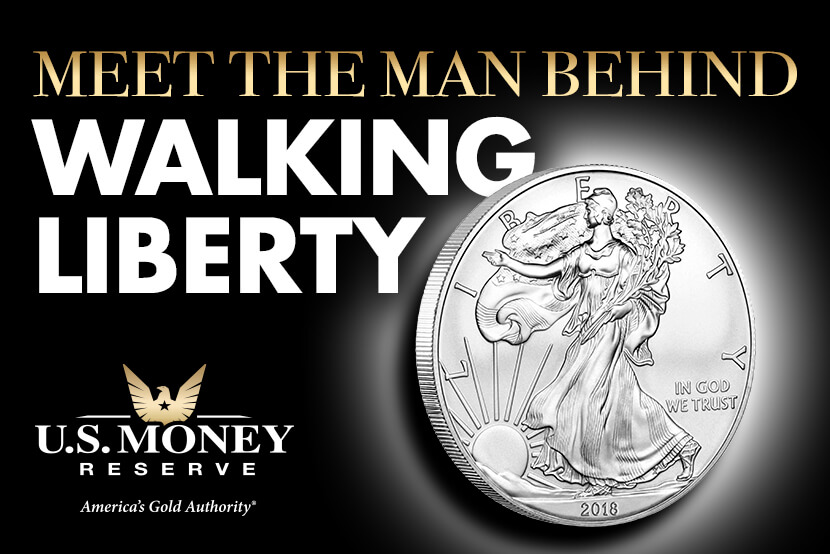 Leonardo da Vinci. Rembrandt. Picasso. Adolph A. Weinman? Early twentieth-century sculptor Adolph A. Weinman may not be a household name in America, but he should be. His creations can be seen across the country, from New York City to Detroit, and his legacy lives on with every Silver Eagle Coin that's minted. Meet the man behind Walking Liberty, one of the most iconic images in American coinage.

Adolph Alexander Weinman was born in Germany on December 11, 1870, to Gustave, a shoemaker, and his wife, Katherina. Weinman's father passed away in 1880, after which Katherina moved the family to the United States.

Growing up in America, Weinman demonstrated a great talent for drawing, art, carving, and modeling with clay. At the age of 15, he began his formal art education with a long line of apprenticeships, his first with Frederick Kaldenberg. Many of Weinman's early works were carved wood or ivory objects, like smoking pipes and mirror frames.

Weinman's most notable numismatic-related apprenticeship was under Augustus Saint-Gaudens, the brilliant sculptor and monument builder behind the obverse design on the $20 Double Eagle (from 1907–1933)—Lady Liberty. This same Lady Liberty would serve as the design of the Gold American Eagle Coin first issued in 1986. In the world of numismatics, Saint-Gaudens is one of the “greats,” akin to Beethoven and classical music, or Andy Warhol and the pop art movement.

“Saint-Gaudens was a master of the human form, perfectly representing the physical while bringing life to the personality of his subjects,” writes PBS.org.

The legendary coin designers, Saint-Gaudens and Weinman, would later re-connect to collaborate on a medal for President Theodore Roosevelt's inauguration to his second term in 1905.

Weinman opened his own studio in 1904, after a long tutorship under many great sculptors and artists, including Olin Warner and Daniel Chester French.

He quickly made a name for himself. Weinman's monumental sculpture, The Destiny of the Red Man, was featured that same year at the Louisiana Purchase Exposition in St. Louis. He also designed a medal for exposition participants, which was minted at the U.S. Mint at Philadelphia.

By 1915, Weinman was widely respected as one of the nation's finest young artists.

“Weinman's medals leave no room for doubt that he was an exceptionally talented sculptor,” said historian Cornelius Vermeule. “His feeling for subtleties of relief on a small scale, in the framework of a medallic tondo, was most perceptive.”

In 1916, the Commission of Fine Arts invited Weinman and a handful of other sculptors to submit their designs for the U.S. dime, quarter, and half-dollar. According to a press release issued by the Treasury on May 30, 1916, the winning designs were chosen from “more than fifty” sketch models. They were said to be “the most satisfactory from an artistic point of view.”

Weinman’s entries were selected for the dime and half-dollar.

The obverse of Weinman's Silver Mercury Dime, also called the Winged Liberty Dime, shows a young Lady Liberty wearing a winged Phrygian cap. Phrygian caps were typically worn by people in Eastern Europe and the Balkans. As you look at the iconic hat, look for Weinman's monogram “AW” to the right of Liberty's neck!

The reverse side of the Mercury Dime features fasces, which is a bundle of rods with a projecting ax blade. In ancient Rome, a magistrate would carry fasces as a symbol of power and jurisdiction. The Silver Mercury Dime was produced from 1916 to 1945 when the design changed to honor President Roosevelt after WWII.

As PCGS notes, J.W. Scott of New York City, one of the outstanding numismatists of the day, pronounced the new dime “the best piece of work that the United States Mint has turned out in a century.” Another noted hobbyist, Farran Zerbe, declared himself “delighted” with the coin.

The Walking Liberty Half-Dollar was met with just as much excitement and reverence as the Mercury Dime. The New York Sun described it as a “lively” coin, typifying “hustle.” And the Boston Herald said it had “a forward look on its face,” according to PCGS.

The U.S. Mint describes the design as “a full-length figure of Liberty in full stride, enveloped in folds of the flag, with her right hand extended and branches of laurel and oak in her left,” symbolizing both civil and military glory.

The half-dollar's reverse side shows a stylized eagle perched on a rock, ready to take flight. A mountain pine sapling springs from the rock, symbolic of America.

The Walking Liberty Half-Dollar was produced from 1916 to 1947, and its design was resurrected in 1986 and used on the obverse of the 1 oz. Silver American Eagle Coin.

Weinman passed away on August 8, 1952, but he's hardly been forgotten. You've likely seen Weinman's handiwork, whether you realize it or not. He designed architectural and monumental works of art on state capital buildings in Wisconsin, Louisiana, and Missouri. You can also see his sculptures in Washington, D.C. at the Post Office Department, Jefferson Memorial, and U.S. Supreme Court.