Unemployment Rises in Most U.S. States in July 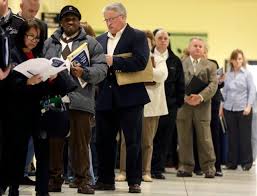 WASHINGTON (AP) — Unemployment rates rose in 30 U.S. states last month, even as employers in two-thirds of the states stepped up hiring. The trends reflect an increase in job-hunters nationwide as an improving economy has encouraged more people to seek work.

The Labor Department said Monday that unemployment rates fell in eight states in July and were unchanged in 12. At the same time, hiring rose in 36 states, fell in 13, and was unchanged in Iowa.

The national unemployment rate ticked up to 6.2 percent in July from 6.1 percent in June, the government said earlier this month, even as employers added 209,000 jobs.

The reason the rate rose nationwide even as hiring increased is that more Americans launched job searches but didn't find work. That lifted the number of unemployed. Still, the rise in people seeking jobs suggests they're more optimistic about their prospects.

The jobless aren't counted as unemployed unless they're actively seeking work.

In July, Georgia had the second-highest rate, at 7.8 percent. Michigan, Rhode Island and Nevada were tied with the third-highest, at 7.7 percent.

North Dakota had the lowest rate in the nation, as it has for many years, at 2.8 percent. The state is benefiting from an oil and gas drilling boom. Utah and Nebraska were tied with the next lowest rates, at 3.6 percent.

Despite this month's increases, state unemployment rates have significantly improved nationwide in the past year. That trend has reduced regional differences.

The Midwest had the lowest rate of the nation's four largest regions in July, at 5.9 percent. The West had the highest, at 6.6 percent. The rate was 6.1 percent in the South and the Northeast.

That gap of 0.7 percentage points from the lowest to highest is narrower than a year earlier. In July 2013, the South had the lowest rate, at 7.1 percent, and the West the highest, at 8.1 percent.

This story appeared in The Guardian by the Associated Press. View article here.

4 Tips for Safeguarding Against Financial Disappointment
2020-03-25