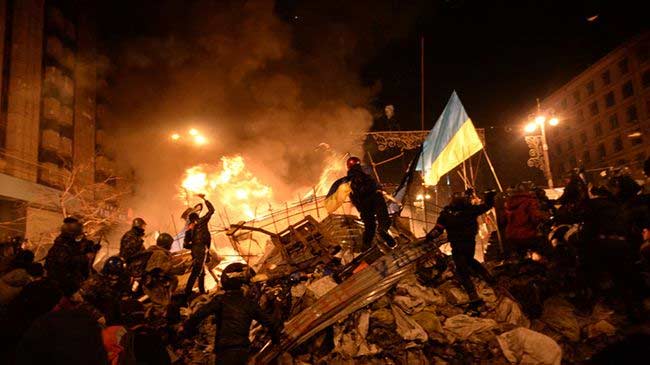 Ukraine’s next crisis will be a devastatingly economic one, as violent conflict destroys critical infrastructure in the east and brings key industry to a halt, furthering weakening the energy sector by crippling coal-based electricity production.

The Ukrainian military’s showdown with separatists in the industrial east has forced coal mines to severely cut production or close down entirely. This has led to an electricity crisis that can only be staunched by cutting domestic production along with exports to Europe, Crimea, and Belarus — or worse, getting more imports from Russia.

In the coal centers of Ukraine’s industrial east — Luhansk and Donetsk — fighting has forced the full closure of an estimated 50 percent of coal mines, while overall coal production has fallen 22 percent over the same period last year.

Key industry sources say they will potentially run out of coal in less than three weeks.
For Ukraine, the second largest producer of coal in Europe, this will have a devastating impact on the energy sector, which is in a state of emergency, unable to get coal to thermal power plants that provide some 40 percent of the entire country’s electricity.

In the wider energy picture, the halt of coal production sets Ukraine back a decade. The plan was to rely more on coal in order to reduce dependence on Russian natural gas.

But the new reality has insiders wondering how Ukraine will produce more of its own natural gas, after the implementation earlier this month of an amended tax code that targets private gas producers with a tax so high that they will significantly reduce production through the end of the year and beyond that is anyone’s guess. (Full disclosure: my firm, Pelicourt LLC, is the majority shareholder of Ukraine’s third-largest gas producer, Cub Energy, and I have advised the U.S. and Canadian governments on the potential harm the new tax will cause.)

Economically, the conflict in the east is a disaster for Ukraine, which has traditionally been a net exporter of thermal coal for power generation. Now it will have to increase imports of fuel to make up for the loss. But even then, the destruction of supply routes makes this challenging.

Not only have coal supply routes been destroyed in the conflict, but other critical infrastructure has taken a hit as well, threatening other industries.

Across the board, Ukraine’s industrial heartland is reeling from cut-off supply and shipping chains that threaten to destroy as much as 5 percent of Ukraine’s gross domestic product in the second half of this year.

In the meantime, observers can be forgiven their confusion over various measures Kiev has taken since the intensification of the conflict. Indeed, the signals coming out of Kiev have been mixed, at best.

At the same time, however, Kiev passed a new amendment to the tax code that doubles taxes for private gas producers and promises to keep Western investors as far away from Ukraine as they can get.

Each move is designed to negate the other. The economy is being destroyed, yet Kiev is itself destroying any chance of bringing in Western investment to prop it up. Western firms are invited to invest in Ukraine, while at the same time Ukraine makes a mockery of transparency and ensures that the investment climate is suddenly even less attractive than it was two weeks ago. Lip service is paid to developing more resources to build energy independence, but a new tax doubles costs for private producers who will stop producing and pick up stakes.

It’s hard not to conclude that Energy Minister Yuriy Prodan is working hard to discourage new investment in the energy sector.