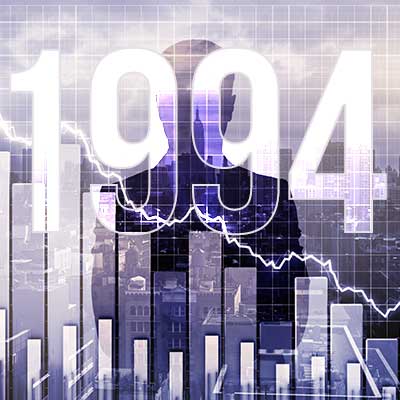 Back in 1994, a gallon of gas was about $1.09. A movie ticket was about $4 and the average cost of a new home in the United States was just under $120,000. But, presiding economic conditions, along with a few uncanny political events, and one major fiscal calamity offer some very important parallels about today’s economy and the risk to our money.

In January of 1994, the U.S. was finally emerging from recession and enjoying the 34th straight month of economic expansion. The soaring inflation of the early 1980s was a distant memory, unemployment was down, growth outlook was improving, and the Dow Jones closed above 3900 for the first time ever.

That same month, amid mounting political pressure, Attorney General Janet Reno appointed a special counsel to investigate President Bill Clinton with respect to the Whitewater Development Corporation. The investigation started under special prosecutor Robert Friske and was followed by independent counsel Ken Starr who delved into the death of White House lawyer, (and a key figure in the Whitewater investigation), Vince Foster. The sudden resignation of Associate Attorney General Webster Hubbell, Hillary Clinton’s former law firm partner, in April of 1994, only added to the swirl of controversy as the White House and the presidency seemed under siege.

The bond market looked quite similar to today; yields and inflation were both low. The Federal fund rate sat at 3%, and the Fed was desperately in search of fiscal prudence. Acknowledging a bubble, Fed Chair Greenspan decided to “let a little air out” and embarked on six consecutive rate increases, ultimately doubling the benchmark rate in just 12 months.

No one, it seems, was paying attention to the possible ramifications—least of all Wall Street.

By late 1994, bond prices had collapsed, the yield on the 30-year U.S. Treasury bond surged above 8 percent, mortgage rates rose more than 30%, and stock volatility hit the roof. Bond holders suffered over $1 trillion in losses in what has now been dubbed “The Great Bond Market Massacre.” Some of the biggest losers included Dell Computer, Eastman Kodak, Mead, Procter & Gamble, and Silverado Savings and Loan. The City College of Chicago lost almost all of its portfolio, and in the largest municipal collapse in U.S. history at the time, Orange County, California was forced into bankruptcy.

At over $100 trillion in value, today’s global bond market is a behemoth. With $700 billion a day in trading volume, it is more than triple the size of worldwide stock market capitalization. While bonds have historically offered stable yields and low volatility, they have more recently become a sanctuary for speculators doubling down on artificially low rates. Were it not for the massive bond buying spree by central banks during the Great Recession, the yield on current debt would be significantly higher.

Membership in the ZIRP (zero interest rate policy) and NIRP (negative interest rate policy) club, however, is now steadily shrinking. QE is unwinding, and interest rates are on the march, but unfortunately for us—the years of unprecedented monetary expansion have left us more vulnerable and less prepared for normalization. We are now in the biggest and most complex bond market bubble in history.

Twenty-three years after “The Great Bond Massacre,” market speculation is rampant, valuations are deceptive, and collective debt is a far greater threat to the global economy. Interest rates are again facing multiple hikes, controversy is engulfing another administration, and the pro-growth agenda of President Trump is under siege.

It is a familiar story of cheap money, an overactive Fed and political partisanship. And, history suggests that it will end badly. A bond collapse now would mean staggering losses for pensions, banks, insurance companies—and a fast slide back into recession. Those that had the foresight to buy gold back in 1994 have enjoyed a return of over 229%. With the current financial landscape more precarious and far more uncertain—can any of us afford to ignore gold in 2017?