Recession vs. Depression—What’s the Difference? 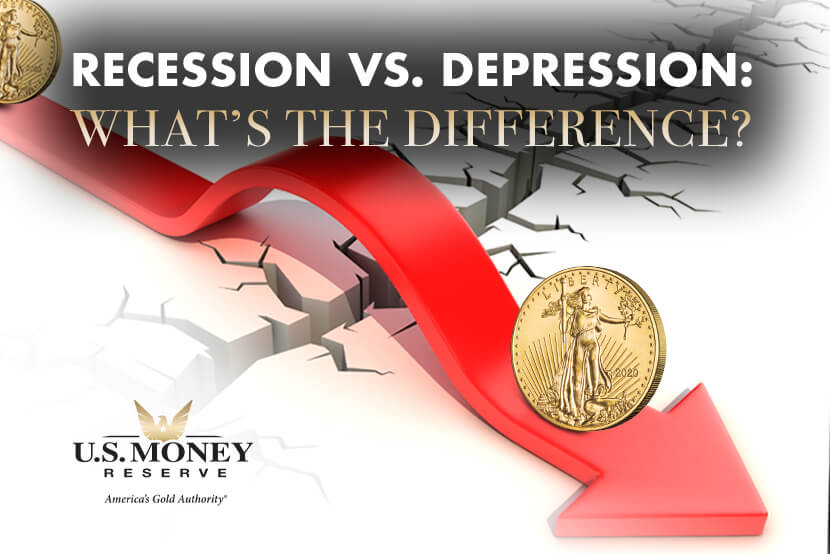 These days, the words “recession” and “depression” get tossed around a lot. A poll conducted in April 2020 by the Gallup organization found that 42 percent of Americans believe the U.S. economy is in a recession, and 30 percent believe it’s in a depression. Which is it?

And many of us might not know the definitions of recession and depression or the differences and similarities between the two. Follow along as we go over the basics of economic downturns and the part played in them by precious metals.

What is a recession?

According to the Federal Reserve Bank of San Francisco, journalists often describe a recession as two consecutive quarters of decline in the quarterly inflation-adjusted gross domestic product (GDP). GDP represents the value of goods and services produced by the U.S. economy.

The National Bureau of Economic Research defines the period of decline a little differently. “A recession is a significant decline in economic activity spread across the economy, lasting more than a few months, normally visible in real GDP, real income, employment, industrial production, and wholesale-retail sales,” the Bureau notes. “A recession begins just after the economy reaches a peak of activity and ends as the economy reaches its trough. Between trough and peak, the economy is in an expansion.”

The Great Recession, which stretched from December 2007 to June 2009, is the most recent example of a U.S. recession. At that point, it was the worst recession since World War II. During the Great Recession, GDP dropped, the unemployment rate spiked, home prices plummeted, and the net worth of U.S. households and nonprofit organizations tumbled from $69 trillion in 2007 to $55 trillion in 2009.

What is a depression?

According to the Federal Reserve Bank of San Francisco, there’s no standard definition of a depression. Simply put, it’s typically a more dire recession.

“There are repeated periods during which real GDP falls, the most dramatic instance being the early 1930s. Such periods are called recessions if they are mild and depressions if they are more severe,” N. Gregory Mankiw writes in his textbook on macroeconomics.

A panel of members of the National Bureau of Economic Research issues the official declaration of a recession or depression, although it usually takes 6 to 12 months for the panel to make that judgment call.

The Great Depression, which lingered from 1929 to 1939, reigns as the most devastating economic downturn in the history of the industrialized world. The stock market crash of 1929 marked the beginning of the Great Depression. In the wake of the crash, banks failed, consumer spending tanked, unemployment soared, home foreclosures jumped, and homelessness increased. At one point, close to 25% of American workers were jobless.

What are the differences between a recession and a depression?

Think of a recession and a depression as economic cousins. They share some DNA, but they don’t look alike. Here are four of the key factors that set them apart:

Keep in mind, though, that there’s no textbook definition of a depression. Therefore, a certain span of time might qualify as a depression but might not perfectly match the previously mentioned benchmarks.

What are the similarities between a recession and a depression?

While a recession and a depression are different, they are related. Both involve painfully long periods of economic trouble, including declines in GDP and hikes in unemployment rates.

Furthermore, recessions and depressions characteristically follow economic booms. And both types of downturns bring about decreases in business investments and stock values.

How do precious metals perform during recessions and depressions?

Historically, precious metals have notched gains during recessions and depressions.

Amid the 2007–2009 Great Recession, for instance, gold outperformed the equities market. Gold’s price enjoyed a fairly steady rise from December 2007 to July 2011, then saw a dip until January 2016 before really taking off again. In many cases, asset holders pursued gold as a safe haven to avoid the turbulent equities market.

After the Great Recession, the price of gold climbed. From June 2009 to September 2011, for example, the price went up about 86 percent.

Gold saw a similar trajectory at the front end of the Great Depression, shooting up from $20.67/oz. in 1929 to $35/oz. in 1934—when President Franklin D. Roosevelt restricted the private ownership of some forms of gold. Gold’s price remained relatively stable until 1971 when President Nixon ended the gold standard and the convertibility of the dollar into gold.

“A rise in the price of gold may be a signal that the economy is struggling. As a result, in times of either a crisis or inflation, many [asset holders] turn to gold to protect their principal,” according to the U.S. Bureau of Labor Statistics.

Historically, silver also witnesses price upswings during recessions and depressions because of its attractiveness as a safe haven. During the Great Depression, for instance, the price of silver decreased from late 1929 to early 1933 but then stayed above that low during the rest of the downturn.

Precious metals are a proven safe haven during times of economic turbulence—recession, depression, or otherwise. Call U.S. Money Reserve today for up-to-date pricing on gold, silver, and other precious metals.