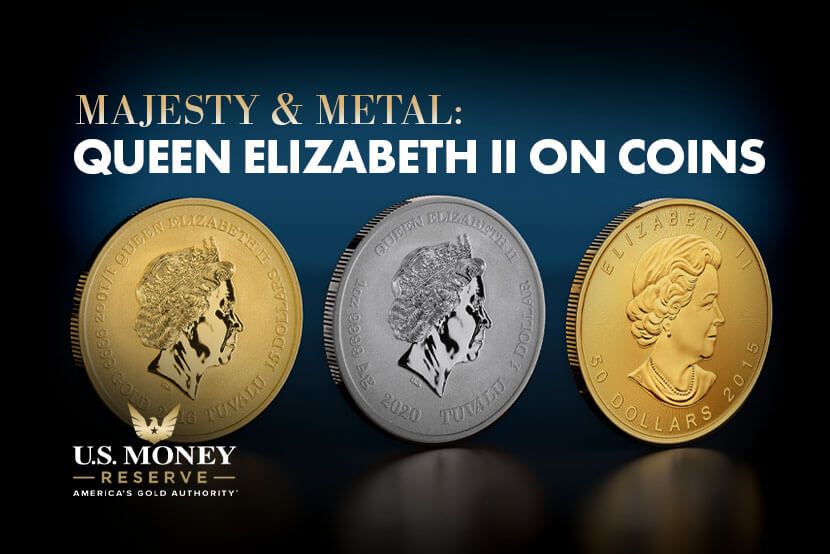 At age 94, Queen Elizabeth II is the longest-reigning monarch in the world. She’s known for the immense moral support she provided to the British people during World War II and for her longevity. She’s also known for modernizing the British monarchy and for her love of corgis.

Beyond the information in history books and on The Crown, however, who is this woman? And why do we honor her with portraits sealed with the permanence of precious metals? In honor of Women’s History Month, we take a few moments to shine a spotlight on an American ally and amazing woman: Queen Elizabeth II.

Who Is Queen Elizabeth II?

Born April 21, 1926, in London, Princess Elizabeth ascended to the throne at age 25 following the death of her father, King George VI, in 1952. The following year, her nearly three-hour coronation as Queen Elizabeth II was the first coronation televised by Buckingham Palace. She wore a crown made in 1820 and adorned with 1,333 diamonds and 169 pearls.

Queen Elizabeth II may be among the best-known women in the world, but she’s also one of the richest. Her net worth reportedly is $480 million. She derives her wealth from annual pay of close to $120 million, along with a private trust. Queen Elizabeth II and her husband, Prince Philip, maintain six residences.

Notable events during Queen Elizabeth II’s reign include the deadly Welsh coal-mining disaster of 1966, a widely watched 1969 TV documentary featuring the royal family, Prince Charles’ 1981 wedding to Lady Diana Spencer, the end of Charles and Diana’s marriage in 1992, the death of Princess Diana in 1997, and the birth of her first great-grandchild (Prince George) in 2013.

“Her extraordinary reign has seen her travel more widely than any other monarch, undertaking many historic overseas visits. Known for her sense of duty and her devotion to a life of service, she has been an important figurehead…during times of enormous social change,” according to Buckingham Palace.

Coins with Queen Elizabeth II on Them

According to the Guinness Book of World Records, Queen Elizabeth II shows up on coins from at least 35 countries—more countries than any other living monarch. Among those nations are the United Kingdom, Canada, the Bahamas, Jamaica, South Africa, Nigeria, Hong Kong, Australia, New Zealand, and Fiji.

The first such coins, bearing a portrait done by Mary Gillick, were issued in 1953. Next were coins that debuted in 1968 with a portrait created by Arnold Machin. A modified version of Machin’s portrait has appeared on British postage stamps since 1967, meaning it’s likely the most reproduced image in history. From 1985 to 1997, U.K. coins in circulation featured a royal portrait by Raphael Maklouf. After that, official coins with a portrait by Ian Rank-Broadley appeared. Finally, coins with a portrait by Jody Clark premiered in 2015.

To celebrate her 95th birthday in 2021 and her long reign, the Royal Mint will issue a special £5 coin. The words “my heart and my devotion” will appear on the coin in a nod to her iconic 1957 Christmas broadcast.

“In the old days, the monarch led his soldiers on the battlefield, and his leadership at all times was close and personal. Today, things are very different,” she said during that Christmas broadcast. “I cannot lead you into battle, I do not give you laws or administer justice, but I can do something else. I can give you my heart and my devotion to these old islands and to all the peoples of our brotherhood of nations.” 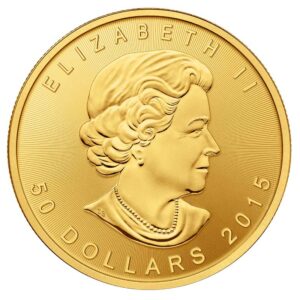 1 oz. Gold Canadian Maple Leaf coin featuring the fourth of the Queen’s portraits to grace Canadian coinage, but the first to show her without a crown.

Queen Elizabeth II’s image also can be seen on U.S Money Reserve’s Pearl Harbor and Iwo Jima coin series, produced by Australia’s Perth Mint. The obverse of these coins honors America’s wartime allies Australia and Great Britain with a classic portrait of the legendary monarch. Queen Elizabeth herself has strong ties to World War II, having driven military trucks as a member of the Women’s Auxiliary Territorial Service.

“The queen remains the only female member of the royal family to have entered the armed forces and is the only living head of state who served in World War II,” History.com notes.