Could the Next Presidential Election Tip the Economic Scale? 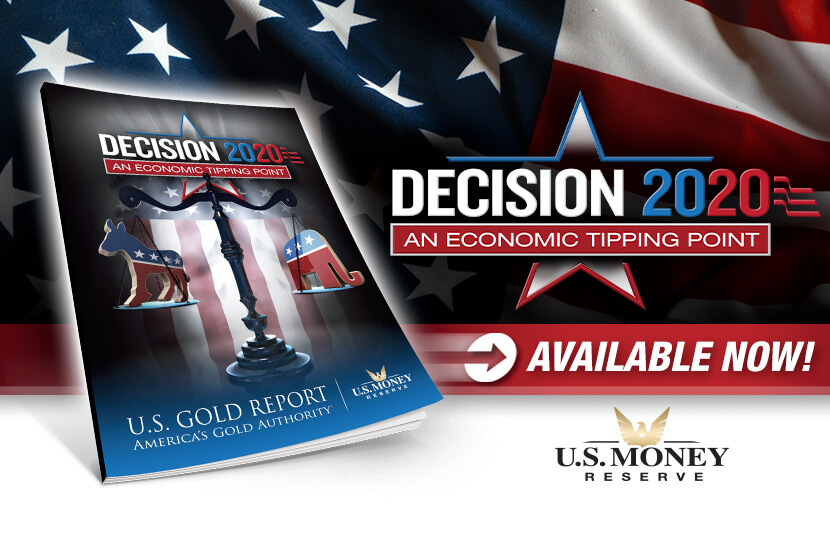 If you follow the news at all—and we’re sure you do—you’ve heard about an election coming up in 2020. You’ve also heard about rising fears of a recession.

The already contentious presidential election and the increasingly worrisome economy appear to be on a collision course. Unfortunately, no one has a crystal ball that can precisely predict the outcome of the election or the direction of the economy. Therefore, a layer of uncertainty hangs over the U.S. (and the rest of the world).

As such, it’s critical to get up to speed on the issues that could significantly affect the 2020 presidential election and, ultimately, the U.S. economy and your assets. A new Special Report from U.S. Money Reserve lays out these concerns. What follows is a mere snippet of what’s covered in the report.

As of August 2019, the current U.S. economic expansion and accompanying recovery from the Great Recession of 2008 were the longest in history, at 122 months. Additionally, stocks have been hovering at or near record highs.

However, we know that nothing lasts forever. Even good things come to an end. This can include the ongoing economic expansion and the impressive trajectory of the stock market. A combination of factors could halt both economic and stock-market growth.

To name just a few of the factors:

Download U.S. Money Reserve’s latest Special Report to learn more about the factors that could push us toward a recession.

When Could a Recession Hit the U.S.?

Of particular concern are the predictions of a recession hitting the U.S. perhaps as early as late 2019 or sometime in 2020.

In February, a survey released by the National Association for Business Economics (NABE) revealed that half of the nation’s business economists believe the U.S. will slip into a recession by the end of 2020.

The Duke University/CFO Global Business Outlook survey offers an even more dire forecast, with half of the chief financial officers in the U.S. fearing an American recession will strike by the end of 2019.

No matter when the next recession arrives, Barry Eichengreen, professor of economics and political science at the University of California, Berkeley, insists the U.S. will be ill-prepared to cope with it.

Two Visions for the Future

In 2020, America will be presented with two vastly different visions for industry, trade, government, and the economy. Both political parties could very well put forth a presidential candidate who could provoke an economic downturn and worsen the coming recession.

In a June report, the Congressional Budget Office stated that an absence of change would lead to large budget deficits over the next 30 years, an unprecedented level of federal debt.

Staring the winner in the face will be the stark reality that although ramped-up economic growth was supposed to offset federal tax cuts and new government expenditures, that hasn’t materialized. Now we’re confronted with more annual deficits, more borrowing, and more red ink—and more financial trouble.

U.S. debt has skyrocketed under the current administration, increasing the likelihood of more debt-ceiling showdowns and more government shutdowns. Meanwhile, a Democratic victory in 2020 could pose threats of its own. Proposals for free healthcare, free college, universal childcare, and other entitlement programs could push the national debt up an ever-more-rocky mountainside.

Against that backdrop, the Federal Reserve has failed to unwind the stimulus from the last recession fully, and its balance sheet remains bloated.

Will it matter which party takes the White House? The stakes are high either way. Download Decision 2020: An Economic Tipping Point to learn why the odds may be in no one’s favor.

The Stakes Are Sky-High

With a presidential election looming, control of Congress hanging in the balance, and an atmosphere of inflamed political polarization, 2020 is poised to be the most important election in at least a generation.

Regardless of who wins or who loses on November 3, 2020, we will be at the precipice of an economic tipping point.

It remains to be seen whether the country can come together to weather another economic storm and whether the Fed and Congress can adequately protect U.S. jobs and home values—and safeguard our pensions and retirement accounts.

What Should You Do Now?

Amid a rising tide of debt, deficits, disputes, discord, and distrust, now is the time to review your emergency fund, limit borrowing, reduce spending, and rebalance your portfolio.

It’s critical to act now to protect your wealth and do what you can to safeguard your future in the event of an election-year recession—and the subsequent fallout of a divided government and a fractured America. To help curb the harm of a projected recession, it’s worth taking a look at gold as a safe-haven alternative and a portfolio diversifier.

Adding to the urgency of examining your portfolio is a fresh prediction from Ray Dalio, founder of the world’s largest hedge fund, Bridgewater Associates. He claims that there’s a 40 percent chance of the U.S. entering a recession before the November 2020 election.

Placing even just five percent of your portfolio in gold could help carry you through market plunges, Joseph Foster, manager of the VanEck International Investors Gold Fund, told CNBC. “A small portion hedges against [sic] a larger portion of your portfolio against financial risk,” Foster said.

Given the current economic and political environment, your portfolio decisions shouldn’t wait until 2020.

To dive into more details about the economic tipping point that’s around the corner, download U.S. Money Reserve’s free Special Report. And if you’re already sold on the need to protect your portfolio with gold, contact one of our Account Executives at 1-844-307-1589 for a free one-on-one consultation.