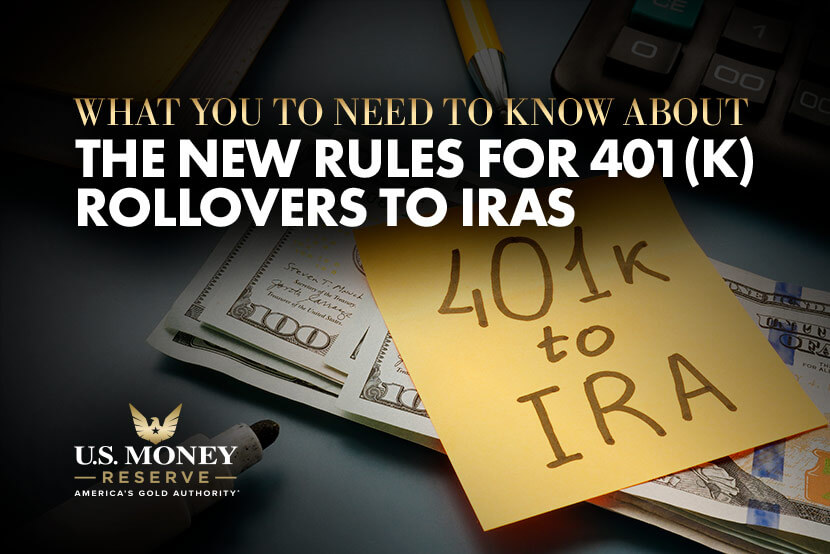 If you’re facing a 401(k) rollover decision in the coming year—because you’re changing jobs or because you’re nearing retirement and want to hold onto your tax-sheltered status a bit longer—there are some important yet complicated changes you need to know about. Here, we go over what a 401(k) to IRA rollover is, why you might want to do this, and what the complicated new rules involve.

A rollover from a 401(k) to an IRA is a pretty simple concept. It involves moving an old 401(k), such as the one you had at a previous job, to an IRA. The money typically should go into the new IRA within 60 days of being taken out of the 401(k).

You’ll often hear this type of IRA called a rollover IRA. You can move the money from an old 401(k) into a traditional IRA or a Roth IRA. With a traditional IRA, taxes on the rolled-over money typically are deferred. With a Roth IRA, you usually pay taxes on the rolled-over money but later can make tax-free withdrawals. However, if you do what’s known as a direct rollover, you can avoid a mandatory tax withholding.

The most common reason for a 401(k) to IRA rollover is to consolidate one or more old 401(k) accounts into a single account. This frequently happens when someone switches jobs. By moving a 401(k) to a rollover IRA, you can keep a closer eye on your money and make it harder to forget that you’ve got an old 401(k).

The bottom line: A 401(k) to IRA rollover can simplify your retirement planning.

Keep in mind that you can carry out a 401(k) to IRA rollover at any age, regardless of whether you’ve recently changed jobs or whether you’re still employed.

Here are important details that you need to know about the new rules for 401(k) to IRA rollovers.

The U.S. Department of Labor, which oversees an array of workplace retirement plans, recently issued new rules related to 401(k) to IRA rollovers. The Department of Labor says the rules are designed to promote advice from financial advisors that’s “in the best interests” of people who own retirement plans. The rules took effect in February 2021; enforcement of the rules is supposed to start in December 2021.

As explained by the Arizona Republic newspaper, the rules seek to prevent financial advisors from getting payments from third-party companies that pose conflicts of interest when the advisors are supplying rollover guidance. “In other words, not all advisors are fiduciaries who put their clients’ best interests first,” the newspaper explains.

Starting in December 2021, financial advisors who handle IRA rollovers must declare in writing that they are, in fact, fiduciaries.

“When advisors act as fiduciaries, they must, among other things, disclose conflicts of interest, offer prudent advice, charge reasonable fees, disclose why rolling money into an IRA is in your best interest, and act with undivided loyalty (meaning an advisor can’t put his or her interests ahead of yours),” according to the Arizona Republic.

Some experts speculate that certain financial advisors will stop dealing with IRA rollovers because they don’t want to be held to the new fiduciary standards.

For everyday consumers who are contemplating a 401(k) to IRA rollover, the new federal rules are a reminder that it’s in your best interests to always make sure your financial advisor is acting in your best interests. After all, you want to ensure that you’re entrusting your future to an advisor who’s focused more on your money than on their own money-making potential. Review an overview of the “New Fiduciary Advice Exemption” from the U.S. Department of Labor and the full text here. Then turn to your financial advisor with questions.

If you’re looking to move your 401(k) funds to a precious metals IRA, give us a call. Knowledgeable Account Executives at U.S. Money Reserve are ready to answer your IRA questions.

Retirement Accounts Are Filling up—How Diversified Are They?
2021-08-25

Choosing Your Electives for a Balanced Portfolio
2021-08-18

How to Protect Your Retirement Plans from Inflation
2021-08-06