Mint State vs Proof Coins: Is There a Difference?

Home » Coins » Mint State vs Proof Coins: Is There a Difference? 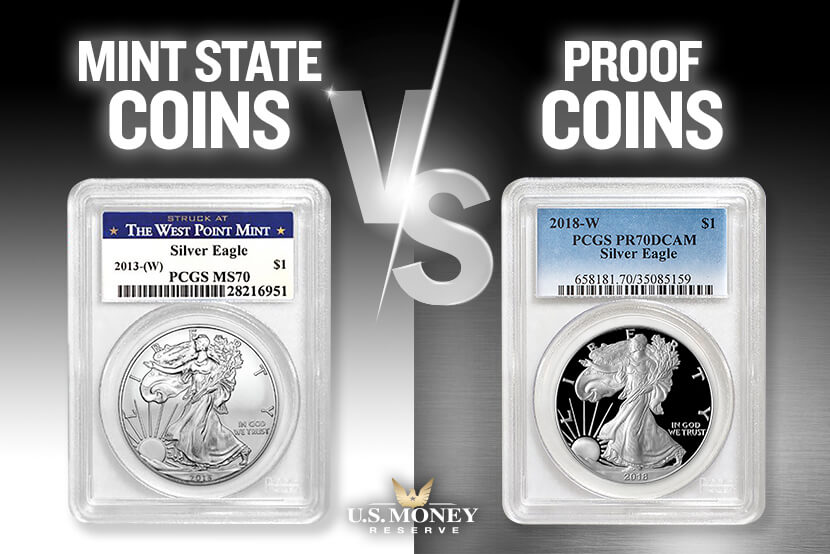 What's the difference between the terms mint state and proof? A big one! One term refers to a coin's graded condition and the other most often refers to a coin's method of manufacture. When comparing prices for mint vs. proof coins, you want to make sure you fully understand what you're buying. Each coin is uniquely poised to support your precious metals portfolio. Learn more about mint state coins, specifically, and what it means to buy coins in this coveted condition. You'll find yourself asking, “Can you really put a price on perfection?”

What Are Mint State Coins?

Mint state refers to a coin's condition on the Sheldon Coin Grading Scale.

Mint state coins can range in condition from being poorly struck with many heavy marks to showing absolutely no visual marks, even after 5x magnification. Mint state coins are noted with “MS” preceding the number on the coin label.

According to the Professional Coin Grading Service (PCGS), mint state refers to “the numerical grades MS-60 through MS-70, used to denote a business strike coin that never has been in circulation. A mint state coin can range from one that is covered with marks (MS-60) to a flawless example (MS-70).”

Only a small percentage of coins are in superb enough condition to receive the coveted museum-quality grade of MS-70. 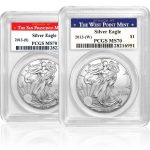 The Mint State Silver American Eagle Coin remains one of the most popular mint state coins to date. Each 1 oz. Mint State Silver American Eagle Coin is certified museum-quality MS-70 or near-perfect MS-69 by PCGS. It represents more than just a means of wealth protection, but a noble reminder of the financial freedom afforded every citizen through our nation's protection of life, liberty and the pursuit of happiness. Call 1-844-307-1589 for live pricing on this special inventory.

The term proof most often refers to a coin's method of manufacture, not its condition or grade. Remember that mint state is used in reference to a coin's grade.

During the minting process, hand-polished blanks are specially treated, struck at least twice, and then carefully packaged to preserve their exceptional finish. Read more about how the Proof American Eagle Coin is made, one of the world's most popular proof coins.

As PCGS explains, a proof coin is “usually struck from a specially prepared coin die on a specially prepared planchet. Proofs are usually given more than one blow from the dies and are usually struck with presses operating at slower speeds and higher striking pressure. Because of this extra care, proofs usually exhibit much sharper detail than regular, or business, strikes. PCGS recognizes proofs (PR) as those struck in 1817 and later.”

Mint state coins have a soft, matte-like finish with some shine, but not nearly as much as a proof coin. Proof coins have “PR” preceding the number on the coin label.

Mint State vs Proof: A Point of Confusion

Here's where things get a little tricky for numismatic newcomers. Mint state coins are always graded. They must go through the grading process in order to receive their coveted mint state grade on the Sheldon Scale.

Proof coins can be graded, and many are, but they don't have to be. A proof coin is a proof coin, regardless of its grading status. A mint state coin must go through the grading process to earn its title.

In their web series about grading coins, PCGS.com calls these two families of coins “similar but different.”

From a grading perspective, “Mint state and proof coins may be similar, but the grader has to keep in mind some key differences when assessing these coins. For instance, proof coins are typically in collectors' hands for several years and are, at many times, are cared for improperly. So, a common issue with proof coins is hairlines (the fine lines from wiping or cleaning the coin improperly). This means that surface preservation must be taken into consideration. Other distinguishing qualities of proof coins include, luster, strike, and eye appeal.”

Such characteristics also factor into a coin's price. “There are a number of reasons, other than rarity, to account for price differences between proof and mint state type coins,” writes numismatist Mark Feld for PCGS.

“Among those are: popularity and demand; potential for promotion; perception (or misperception) of rarity; the intrinsic eye appeal of proof coins, as well as the allure they have held throughout history due to the nature of their production.”

Q: What is the difference between mint-state and proof coins?

The word “proof” can speak to a coin’s finish, type, quality, or condition (grade). The word’s meaning depends on how it’s used and who is using it. The U.S. Mint produces coins with a proof finish. This is how proof is most often used and understood—essentially as a method of manufacture.

The Professional Coin Grading Service (PCGS), however, uses the word to denote a coin’s condition and will certify, or grade, a coin as such (example: Proof/PR-70).

Mint state speaks to a coin’s graded condition. As PCGS notes, mint state refers to “the numerical grades MS-60 through MS-70, used to denote a business-strike coin that never has been in circulation. A mint-state coin can range from one that is covered with marks (MS-60) to a flawless example (MS-70).”

Q: How do I get a mint-certified coin?

A: Minting facilities and institutions do not certify coins. A coin can only be certified by an independent grading service like the Professional Coin Grading Service or Numismatic Guaranty Corporation (NGC). You can purchase coins from precious metals companies like U.S. Money Reserve that carry an extensive inventory of certified, or graded, coins. Nearly all modern certified gold, silver, platinum, and palladium coins sold by U.S. Money Reserve are graded a perfect 70 or near-perfect 69 by PCGS. Seventy is the highest-grade coin you can find.

“Seventy is perfect and flawless with absolutely no imperfections, no fine scratches, no hairlines at all. That’s basically the top, top A+++ of the coin grading scale,” explains John Rothans, Master Numismatist at U.S. Money Reserve.
Learn more about coin grading and the benefits of owning graded coins.

A: MS-65 is a mint-state grade on the Sheldon Coin Grading Scale of 1–70. A coin that’s been deemed MS-65 has above-average luster and may have bag marks.

Bag marks aren’t something to be scared of, though. “Bag marks…are mint-made and therefore very natural,” CoinWeek’s Peter Mosiondz, Jr. notes. “They are the result of a coin falling from the coining press into a bin with others of the same denomination.” The coins are bagged, knocked against one another, and then jostled again when the bags are moved from one location to the next.

According to Mosiondz, “Anything mint-made will not be a factor in the price unless the bag marks are very severe.”

An MS-65 coin is “well struck with moderate marks or hairlines,” NGC adds.

“MS-65’s are above average for the issue with attractive luster and are appealing coins overall,” R. D. Drysdale affirms on the PCGS.com blog.

Q: What is a mint proof?

A: Proof coins were historically made to check dies early in the coin production process. A die is a metallic piece, usually a steel rod, that contains an inverse version of the design that is to be pressed onto a coin. Dies are kind of like rubber stamps because the design on a stamp is used to create multiple copies of the same image. Dies are used in the same way.

In modern times, however, proof coins are not struck to produce sample or test coins. Instead, a mint will strike proof coins for precious metals holders who appreciate unique, high-quality coins with an exceptional finish.

Proof coins from the U.S. Mint are struck at least twice, which gives the coins a frosted, sculpted foreground and a brilliant, mirror-like background. They’re then sealed in a protective plastic covering.

Graded coins, whether mint state or proof, can bolster your precious metals portfolio. Some gold owners believe that the best way to own graded coins is to own all of the years and denominations of issue for a coin program, also known as the date run, and all in the highest grade possible. This type of diversification within your portfolio can maximize the potential for appreciation.

Why? The fewer coins in a grade, the more likely a coin in that grade will be highly sought after in the marketplace. A coin’s population is the number of coins within a specific grade and owning a coin with a relatively small population can be ideal. Since achieving a perfect strike and maintaining a coin’s pristine condition is difficult, many higher-grade coins are difficult to get ahold of and their purchase price reflects it. The basic rules of supply and demand apply here: when demand is high and supply is limited, the purchase price tends to increase.

Through U.S. Money Reserve, you can own some of the world's most popular, awe-inspiring mint state and proof gold and silver coins. Explore your options online and call 1-844-307-1589 for special inventory pricing today. Account Executives available to help you understand the differences between proof and mint state coin grading, and to help you select the best gold and silver coins for your portfolio. Call today!