Who Is Michael Reagan? 8 Things to Know About Ronald Reagan’s Oldest Son 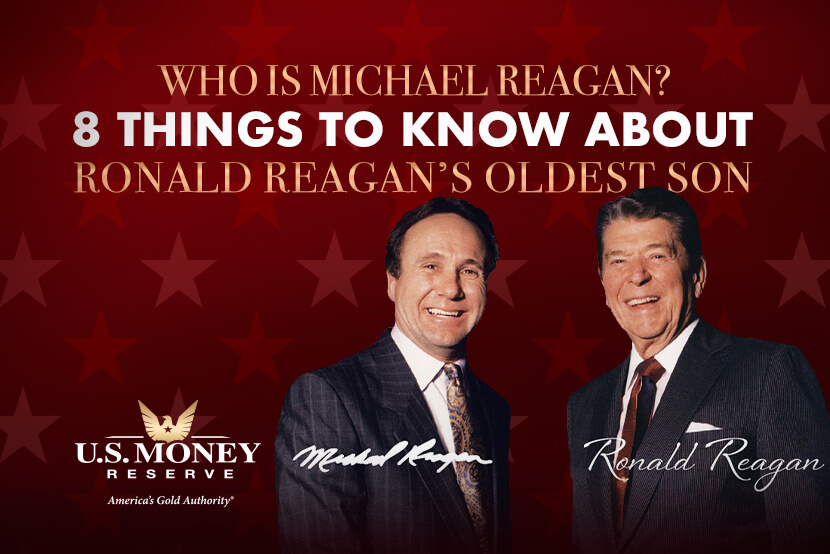 He debated Mikhail Gorbachev and set five world records in powerboat racing. He’s written several books and raised millions of dollars for charities, including the U.S. Olympic Team, the Cystic Fibrosis Foundation, the Juvenile Diabetes Research Foundation, and the Statue of Liberty-Ellis Island Foundation. He’s Michael Reagan, and he continues to uphold his father’s commitment to public service.

1. Michael Reagan used to be on the airwaves.

He hosted a nationally syndicated daily talk-radio show that aired for 17 years. In all, he hosted talk-radio shows for 26 years. (By the way, President Reagan launched his own career as a radio commentator.)

2. Michael Reagan is a best-selling author.

He has written several top-selling books, including On the Outside Looking In, Twice Adopted, and Lessons My Father Taught Me. He also writes a syndicated newspaper column.

Lessons My Father Taught Me remains one of Michael Reagan’s most revered works. In his review of the book, Newt Gingrich said, “Michael Reagan knew Ronald Reagan better than anyone alive today—and his Lessons My Father Taught Me reveals him as more than just a great leader, but as a good father with a great soul, a role model for all of us. No one has done more to apply Reagan’s principles than Michael—and this book is just one more example of that.”

3. Michael Reagan is a philanthropist.

He’s been involved in an array of charitable and public-service causes, with the Reagan Legacy Foundation being the prime example. Among the others are the Michael Reagan Center for Advocacy and Research, John Douglas French Alzheimer’s Foundation, Young America’s Foundation, Santa Barbara Navy League/USS Ronald Reagan crew enhancement program, and My Stuff Bags Foundation.

“As admirable as someone’s intentions may be, Michael stresses [that] the most crucial part about running a nonprofit organization is to find the right cause, select the right people, and never treat it as a means to make a living,” the online magazine GREY noted.

Michael Reagan often speaks about the power of taking a stand and doing so as a community. In a 2016 speech at Liberty University, he explained how his father cared more about what was accomplished during his presidency than who took the credit.

“Don’t worry who gets the credit,” Michael Reagan said to his audience. “Work toward the big picture. Be who you are. Take a stand and don’t be afraid of taking a stand. Know what you believe and why you believe it. [Ronald Reagan] taught me that as a child and he never wavered from his beliefs.”

5. Michael Reagan is a California native.

He was born March 18, 1945, in Los Angeles. Michael still lives in California with his wife, Colleen. They have two children: son Cameron, who works in sales, and daughter Ashley, an elementary school teacher.

6. Michael Reagan's parents were once actors.

Before becoming President, Michael’s father, Ronald Reagan, was a Hollywood actor. So was his mother, the late Jane Wyman. Michael’s parents adopted him in 1945 when he was just three days old.

Looking back on his childhood in a 2008 interview, Michael said, “My parents, Ronald Reagan and Jane Wyman never referred to me as adopted. I was always their son.”

In that same interview, he also said that he would like to write another book and title it, “Please, stop calling me adopted!”

7. Michael Reagan has ties to his father’s alma mater.

President Reagan was a 1932 graduate of Eureka College in Illinois. Michael is a former trustee of the college. In 2019, he became an honorary alumnus and spoke at a ceremony commemorating the 15th anniversary of his father’s death.

“My father always stayed true to himself,” Michael said at Eureka College. “He always had a positive attitude. He never looked down on people; he lifted people up. Even people who didn’t support him politically liked him, and people have a tendency to vote for people they like.”

8. Michael Reagan is dedicated to his father’s legacy.

“The legacy of my father is that he led the world to a better place than when he came into the White House,” Michael told Authority Magazine in a 2019 interview.

Michael remains committed to making the world a better place, too. He’s chairman and president of the Reagan Legacy Foundation, which advances causes that President Reagan embraced and highlights accomplishments of the Reagan presidency.

“There’s a lot of people that try to redefine my father in their own image and likeness,” Michael told ABC News in 2011. “And I think that, in fact, they do a disservice.”

“You have these people running for president or [who] want to be president of the United States, trying to literally play their own role of a lifetime and make people believe they are the next Ronald Reagan,” Michael added. “And you know something? There was only one Ronald Reagan, thank God. And he was my father.”