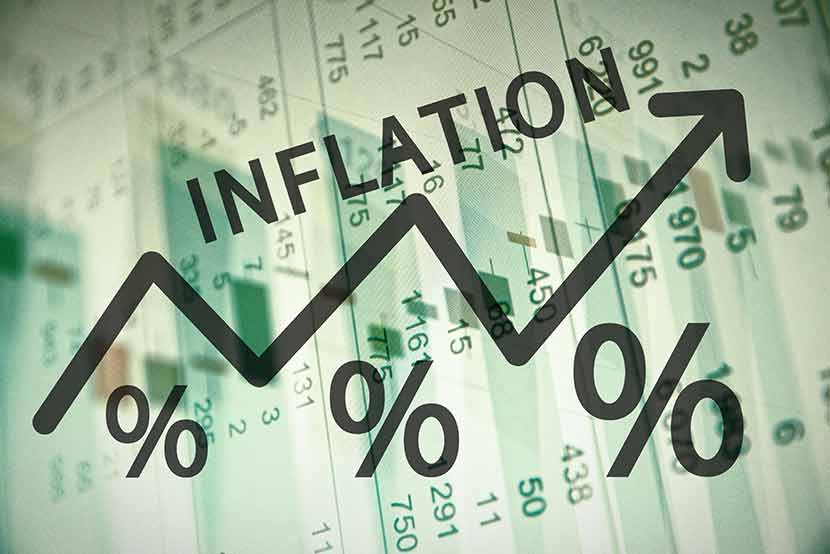 Like other advocates of gold, I’m convinced that physical gold is excellent insurance against unforeseen economic and political events that threaten your wealth. This concept of wealth insurance is crucial to understanding the value of owning gold.

While we share this conviction about gold, I differ with some gold advocates on a few articles of faith in their catechism. I’ll address two of them in this post:

1) Extraordinarily low interest rates and the $3 trillion the Fed has pumped into the economy under QE is setting the stage for much higher inflation, perhaps even hyperinflation. Rising budget deficits are reinforcing this threat.

2) The value of the dollar has fallen for many years, and the Fed’s huge monetary stimulus since 2009 has accelerated the dollar’s decline. Rising budget deficits are reinforcing the fall in the dollar.

Here are three graphs bearing on these beliefs.

As this graph shows, inflation has actually declined since the Fed lowered interest rates to historic lows and began injecting more than $3 trillion into the economy through QE.

For four years now, critics of the Fed’s monetary policy have issued repeated warnings about an imminent spike in inflation. They might eventually be right, but by now they’re the boy who cried “wolf”.

No doubt, the Fed faces a difficult balancing act finding the right time to wind down QE without undercutting the economy or, on the other hand, launching a rapid rise in inflation. But no one knows when that sweet spot will be.

The hyper-focus on inflation is leading us to overlook other risks the Fed’s unprecedented monetary easing pose. QE has artificially inflated stock and housing values and the economies of some emerging markets, all of which will fall when the Fed turns off the QE spigot. How far and how fast they’ll fall is anybody’s guess.

These are all good reasons to own wealth insurance.

Many people believe the dollar is in a relentless decline. Not true. The dollar’s value is typically measured against a basket of other major currencies in the world.

As the graph above shows, the dollar rose in value between 1995 and 2001, fell until 2008, and has remained steady for the past five years. The past five years correspond with the Fed’s easy-money policies and stimulative tax and spending policies enacted by Congress in 2009.

Advocates of gold also overlook another fact: a falling dollar raises the value of gold—good for owners of gold. A rising dollar lowers the price of gold and presents a good buying opportunity.

As this graph shows, the deficit actually fell between 1993 and 2000, rose to a peak at the height of the Great Recession, and has fallen over the past five years. In fact, the deficit in 2013, adjusted for inflation, will be less than it was in 2003.

Advocates of gold can make a strong case for the metal without resorting to these mistaken arguments about inflation, a falling dollar, and the relentless rise in federal budget deficits.