How Is Gold Refined and Processed? 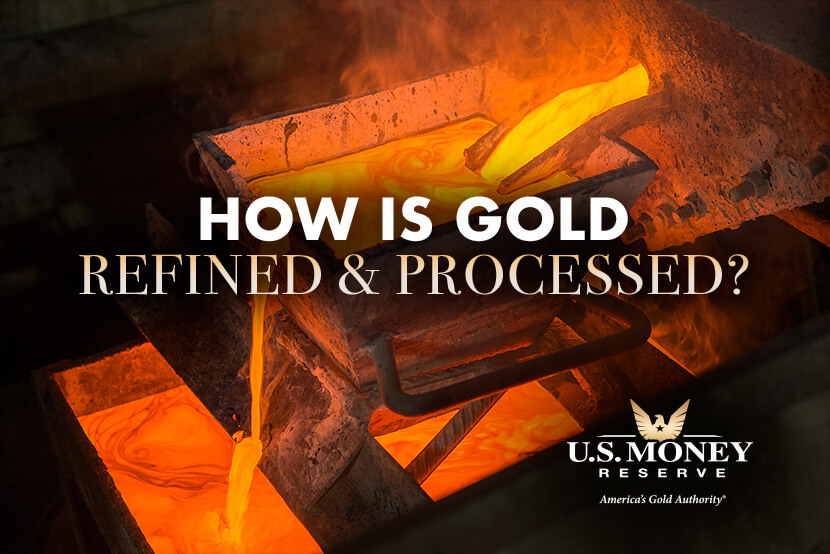 Do you think you have to be a chemist to understand how gold transforms from a “rock” in the ground into the American Eagle you hold in your hand? Think again!

We’ll walk you through how gold is refined and processed and highlight the key role that the U.S. Mint plays in producing some of the world’s most sought-after gold coins.

From Raw Gold to Pure Gold

Here’s a little bit of a science lesson. There are not one but two common processes for refining gold: the Miller process and the Wohlwill process. Other less common methods are cupellation, inquartation and parting, fizzer cell, aqua regia, and the pyrometallurgical process.

According to the World Gold Council, the Miller process uses gaseous chlorine to extract impurities when gold is at its melting point. Impurities separate into a layer on the surface of the molten purified gold. While the Miller process “is rapid and simple,” the Council notes, it produces gold that’s only about 99.95-percent pure.

The Wohlwill process, however, boosts purity to 99.99 percent through electrolysis. In this process, a casting of impure gold is dropped into an electrolyte solution of hydrochloric acid and gold chloride.

“Under the influence of an electric current, the gold migrates to a negatively charged electrode (cathode), where it is restored to a highly pure metallic state, leaving the impurities as a separate solution or residue,” the World Gold Council reports.

When a Coin Becomes a Coin

So how does gold go from being processed to becoming a coin? Here, we look at the process used by the U.S. Mint.

Once gold reaches the desired purity, the metal is cast into an ingot, according to The Spruce Crafts website. These large metal bars contain the amount of gold required by a mint. An ingot is rolled into the proper thickness as a sheet of metal before the rest of the process can take place.

The sheets of metal are then wound into giant coils. Each coil is fed through a blanking press, which punches out round disks called blanks. The blanks are fed into hydraulic coining presses that automatically feed the blanks into the coining machine. At full capacity, the machine can produce more than 600 coins per minute.

Next, the blanks are heated in an annealing furnace to soften the metal. Then they’re washed and dried. A machine called an upsetting mill puts a rim around the edge of the blanks.

After that, the design and lettering are added in a process called striking. The blanks pass through a coining press, which applies the images, currency amount, and mottoes onto both sides. At that point, the blanks become coins.

“Produced and sold for collectors, gold coins [made] by the U.S. Mint are beautiful pieces of art in precious metal,” the Mint writes.

Gold coins are made in proof and uncirculated finishes, ranging from one-tenth of an ounce to one ounce and 22 to 24 karats. The Mint’s gold coins include varieties of the Gold American Eagle, Gold American Buffalo, and more.

At U.S. Money Reserve, we specialize in offering gold coins that are in perfect and near-perfect condition—allowing for full appreciation of the beauty and purity of natural gold. Call 1-844-307-1589 today for live pricing on this high-quality inventory.