The History of the Self-Directed IRA 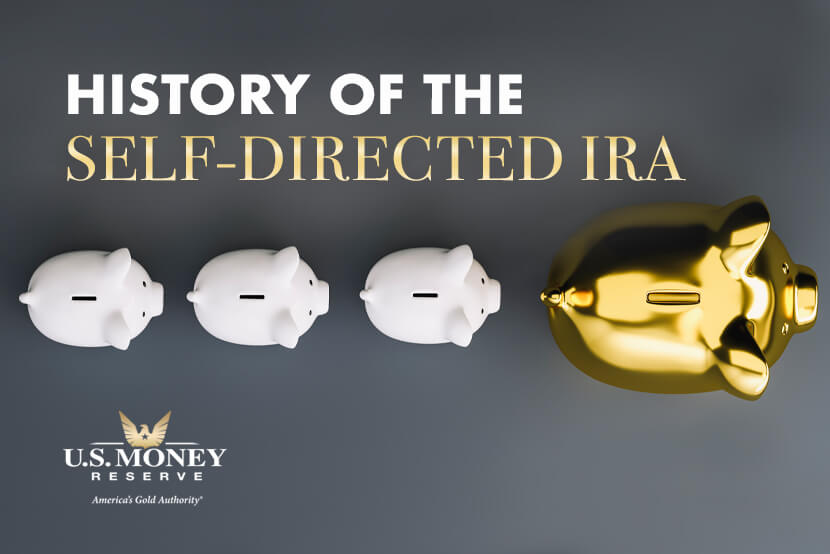 Self-Directed IRAs got their start in the 1970s. Still, it wasn’t until 1997 that the IRS lifted restrictions on diversification and allowed plans to include specific types of precious metal coins and bullion. How did retirement savers come to enjoy the full freedoms and benefits of today’s Self-Directed IRA? Take a walk through history to find out.

The Birth of the IRA

Federal legislation passed in 1974—the Employee Retirement Security Act, or ERISA—created the individual retirement account, or IRA. A year later, Americans could set up IRAs. Both traditional IRAs and Self-Directed IRAs have been around since the IRA was first established.

Simply put, an IRA lets you set aside money for retirement on a tax-free or tax-deferred basis, depending on which type of IRA you choose.

Over the years, the maximum amount of money someone can contribute annually to an IRA has gone up:

The federal Economic Recovery Tax Act of 1981 opened up eligibility to IRAs for millions more Americans and raised contribution limits. This law took effect in 1982.

Today, 36% of American households own IRAs, with traditional IRAs being the most common type, followed by Roth IRAs and employer-sponsored IRAs.

The Introduction of the Roth IRA

“Don’t overlook the opportunity to fully utilize the power of Roth to build family wealth by making all allowable contributions for family members with earned income, including children, grandchildren, and even parents,” personal financial planner and CPA Brooke Salvini says. “Starting a Roth account as young as possible allows for many years of tax-free growth, which occurs when you’ve had a Roth IRA for at least five years and earnings are not withdrawn until after age 59½.”

The Emergence of the Precious Metals IRA

The Taxpayer Relief Act of 1997 also ushered in another retirement innovation: the Precious Metals IRA. Under this law, Congress broadened the types of precious metals that could be added to an IRA. The Act permitted gold, silver, platinum, and palladium and other alternative assets, such as real estate, loans, and private debt, to be contributed to a Self-Directed IRA.

A Self-Directed IRA—in the form of a traditional IRA or Roth IRA—allows someone to diversify their holdings beyond typical assets such as stocks, bonds, mutual funds, and ETFs. Under the umbrella of a Self-Directed IRA, a Precious Metals IRA lets you save for retirement by purchasing IRS-approved gold, silver, platinum, or palladium bullion and coins on a tax-advantaged basis and with the same contribution limits as all IRAs.

In the final analysis, a Self-Directed IRA “can be a phenomenal asset,” as Joseph Polakovic, owner and CEO of Castle West Financial in San Diego, told U.S. News & World Report. Could you put it to use for your benefit?