A Brief History of Gold in America

Home » Gold » A Brief History of Gold in America 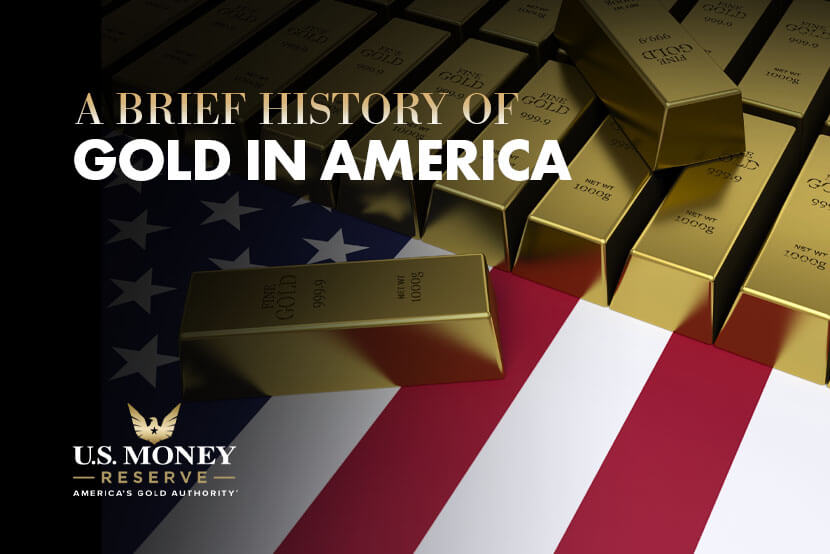 America’s central bank owns almost as much gold as Germany, Italy, and France combined. What’s the story behind our nation’s love of gold? Learn more about America’s golden legacy and how to make gold part of yours.

America’s relationship with the gold standard blossomed in 1834 when the U.S. informally started adhering to this monetary system. The gold standard tied the value of paper money directly to that of physical gold. From 1834 to 1933, the U.S. fixed the price of gold at $20.67/oz.

The gold standard became more formal in 1900 with the passage of the Gold Standard Act. Thirteen years later, in 1913, federal law established the Federal Reserve as the U.S.’s central bank. This move was meant to leverage gold in order to standardize and stabilize currency values. Under this law, the U.S. had to possess gold equal to 40% of the value of the currency it issued and convert those dollars into gold at the fixed price of $20.67/oz.

Amid the financial crisis of 1933, newly sworn-in President Franklin D. Roosevelt suspended the gold standard after Americans rushed to turn their bank deposits into gold. Subsequent actions further watered down the connection between gold and paper money. Those actions included recalling citizens’ gold, giving them $20.67 for each ounce, and halting the minting of gold coins. Before FDR stepped in, the U.S. had controlled the largest gold reserves of any country in the world.

FDR followed those measures with the closure of all U.S. gold mines in 1942, one year after America entered World War II.

Legislation surrounding gold took a different turn in the 1970s. In 1971, President Richard Nixon (in a bid to fight inflation and prevent a run on gold) put an end to the gold standard by prohibiting conversion of the dollar to the yellow metal.

The Gold Rush is perhaps the most golden episode in America’s history.

The Gold Rush dates back to January 1848. That’s when a man named James Marshall discovered gold at a sawmill he was building for John Sutter on property northeast of Sacramento, California. Marshall’s discovery soon touched off a “rush to the mines.” The biggest gold rush in American history got underway in 1849; the thousands of gold diggers became known as 49ers.

“Gold was both plentiful and—by happy geologic accident—easy to extract, making the gold-bearing gravels of California’s rivers into what has been described as ‘the finest opportunity that has ever been offered on any mining frontier,’” according to the California Department of Parks and Recreation.

Miners pulled more than 750,000 pounds of gold worth $2 billion from the region surrounding Sutter’s Mill during the Gold Rush, which peaked in 1852, History.com notes.

Aside from Sutter’s Mill in Northern California, no site in the U.S. is probably more associated with gold than Fort Knox, south of Louisville, Kentucky.

As the depository for about half of the U.S. Treasury’s gold bullion, Fort Knox holds close to 143 million ounces of gold (more than 4,000 metric tons). The Army installation accepted its first delivery of gold in 1937. Today, very little gold is removed from or added to Fort Knox.

Each bar of gold at Fort Knox weighs 27½ pounds.

For centuries, Americans have had a love affair with gold, especially in the form of gold jewelry. But you may not realize that many Americans also own gold coins and bars, and they’re buying more every day.

As for the U.S. government’s ownership of gold, the Federal Reserve controls the world’s biggest gold reserve among central banks worldwide—more than 8,100 metric tons of gold as of August 2020. Although the U.S. doesn’t lead the world in gold production, it’s still no. 4 (three spots behind China). Nevada is by far the top state for gold mining.

There’s no limit to how much gold you can own in the U.S. Make physical gold a part of your legacy today. Shop gold online or call today to speak with a knowledgeable U.S. Money Reserve Account Executive.