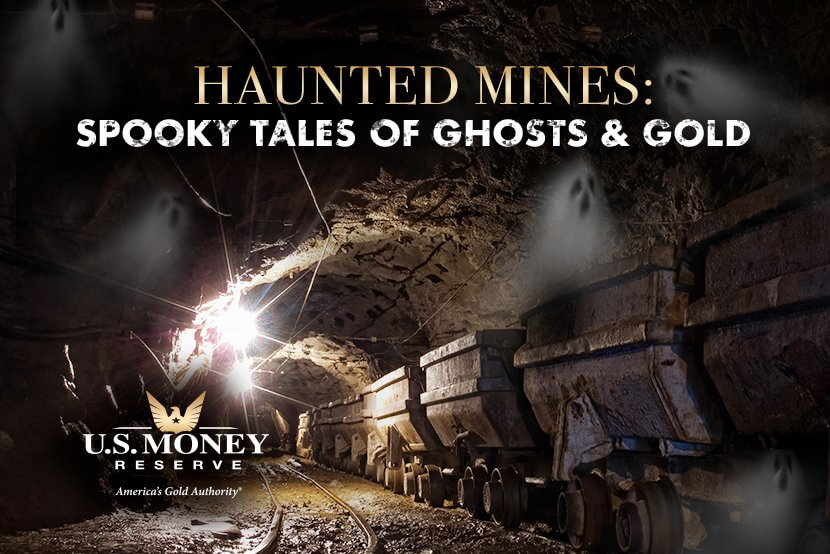 From the Phoenix Gold Mine in Idaho Springs, Colorado, to the Old U.S. Mint in New Orleans, stories of hauntings abound. Could it be that ghosts really go for gold? Channel your inner ghost hunter and get ready for a scare!

The Phoenix Gold Mine, discovered in the 1870s, may have been abandoned by humans, but visitors claim spirits still inhabit the space. The remains of two people are buried inside—including a witch who is said to have practiced black magic. Also, some people report hearing the voices of two men who were supposedly murdered nearby.

The Phoenix Gold Mine is so eerie that a crew from the TV show Ghost Adventures trekked deep inside and encountered a “tiny, malicious spirit” called a Tommyknocker. Tommyknockers are small men in miners’ garb who labor in the shadows. According to folklore, Tommyknockers can be both good and bad. Some miners used to believe that Tommyknockers would knock or hammer on mine walls to lead them to gold, while others believed the knocking sounds would lead them to certain death.

Today, you can tour the Phoenix Gold Mine and even pan for gold—if you dare.

Maggie Mine and the surrounding area are said to be bursting with paranormal activity.

Self-guided tours of the purportedly haunted mine whisk you back in time to the 19th century when the Mulcahy Brothers searched for silver there. If a tour of Maggie Mine doesn’t give you the creeps, then be sure to visit the ghost town’s cemetery—where, according to reports, there are more grave markers than bodies. Where did the grave dwellers go? Your guess is as scary as ours.

Tonopah, Nevada, isn’t your typical vacation destination. The ghost town—once bustling with silver miners—draws travelers who want to step back in time and perhaps experience a fright or two.

Guests at the five-story Mizpah Hotel could be in for a particularly spirited stay. The hotel’s permanent guests are ghosts, including one known as “Lady in Red.”

A “naive and relatively inexperienced member of the world’s oldest profession,” according to the 2015 book Ghosts of Goldfield and Tonopah, Lady in Red was strangled by a jealous lover on the hotel’s fifth floor. “Her spirit is said to shake the chandeliers and leave pearls in rooms,” according to The Wall Street Journal.

Visitors to the Crescent Mine, near Sumpter, Oregon, enjoy a golden opportunity to be scared.

Ghost Mine on cable TV’s SYFY network featured a two-episode investigation of the haunted Crescent Mine by the show’s two in-house paranormal experts and several miners. Among their discoveries was a spirit named Joe.

Aside from its paranormal presence, the mine is said to contain plenty of unmined gold. While the allure of treasure is tempting, there are many other ways to secure your own gold that don’t involve facing disembodied spirits. Learn how to buy fright-free gold with U.S. Money Reserve.

By one account, Lost Dutchman State Park, whose Superstition Mountains include the Lost Dutchman’s Gold Mine, ranks as the most haunted place in Arizona.

According to Phoenix New Times, the mine “is supposedly haunted and guarded by spirits.” Dozens of people have lost their lives searching for the mine or for gold—or both. The exact location of the mine remains unknown.

The town of St. Elmo, Colorado, once a hub for gold and silver mining, dried up as soon as the area’s mines closed. However, the ghosts of its former residents still linger. One of the best-known ghosts is Annabelle Stark, a woman who stayed in St. Elmo even after everyone else had left.

The Uncover Colorado website calls St. Elmo “one of the most accessible and best-preserved ghost towns in the West,” featuring more than 40 buildings, including a general store and a saloon.

From 1838 to 1909, the Old U.S. Mint in New Orleans cranked out coins for both the U.S. government and the Confederacy. As such, it’s the only mint in the U.S. to have produced both kinds of coins.

Now, the Old U.S. Mint in New Orleans houses the New Orleans Jazz Museum. Aside from trumpeting the city’s history of jazz, the museum is said to be haunted. It’s so haunted, in fact, that the SYFY channel’s Ghost Hunters program paid a visit in 2008.

While Ghost Hunters didn’t conclusively uncover any phantoms, Jimmie Johnson, a former employee of the museum, claims that during his eight years working there, two male spirits and two female spirits regularly came in contact with him.