We’re Living in the Golden Age of Gold & Space Exploration 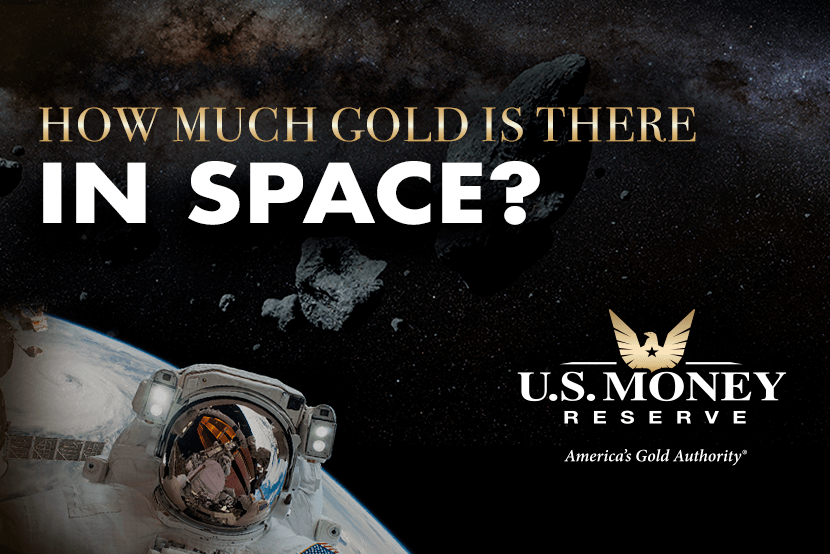 As it turns out, there’s a giant asteroid that contains enough gold and other metals to make everyone on Earth a multibillionaire. And NASA uses gold to protect spacecraft from radiation. With all the gold out in space, extraterrestrial mining is a real possibility.

Learn about potential sources of gold and uses for gold in space with U.S. Money Reserve, America’s Gold Authority®.

Unlike most rocky, icy asteroids, the Psyche asteroid—located between Mars and Jupiter—contains a motherlode of metal, including gold, iron, and nickel. And the estimated value of all that metal? About $700 quintillion. If that money were distributed to all 7.6 billion earthlings, each person would “mine” about $92 billion. To put that into perspective, the size of the economy of Hawaii sat at $93.4 billion as of late 2018.

An un-crewed NASA spacecraft is scheduled to head to Psyche in 2022 to explore the potato-shaped asteroid, which measures about 140 miles in diameter and ranks as one of the biggest asteroids in the region of space known as the asteroid belt. The spacecraft is set to arrive at Psyche on January 31, 2026.

With the move in 2019 to yet another critical stage in developing the Psyche spacecraft, Lindy Elkins-Tanton of Arizona State University (ASU) said she and her team “are one big step closer to uncovering the secrets of Psyche, a giant, mysterious metallic asteroid, and that means the world to us.”

Elkins-Tanton is the director of ASU’s School of Earth and Space Exploration, which is leading the Psyche mission.

By the way, you don’t want to start spending those billions of Psyche dollars just yet. One expert cautions that we could be decades away from mining gold and other precious metals in space. The science and technology aren’t fully developed yet.

Still, Allied Market Research forecasts the market for asteroid mining—most notably the design and construction of spacecraft needed to carry out mining missions—could approach $3.87 billion by 2025.

The Gold Standard in Space

Gold is a “vital strategic resource” in space, NASA says.

Many satellites carry gold-coated mylar sheets to protect them from solar heat, according to NASA. Meanwhile, a thin layer of gold on an astronaut’s helmet visor deflects solar radiation. And satellite microelectronics that send data around the world rely on gold components to ensure reliable, corrosion-resistant, and static-free performance, NASA says.

Golden Opportunity on the Moon

The moon isn’t so barren after all.

Beginning in 2020, a space exploration company called Moon Express is planning regular flights to the moon in pursuit of gold and other rare materials worth trillions of dollars, according to The Sun newspaper.

There’s gold above the earth’s crust, but also below it. To date, about 244,000 metric tons of gold has been discovered, reports the U.S. Geological Survey. There may be more gold to mine, but no one can be sure how much gold is left or how hard it will be to dig up. The amount of gold found by miners has plunged 85 percent over the last decade, notes Bloomberg Market.

As far as the amount of gold that remains in the earth, the U.S. Geological Survey estimates that there are about 57,000 tons left to be mined. Compare that to the amount of gold that’s already been mined and what you’re left with is a cube that’s about 6 meters on each side. A cube that size would stand about as tall as an adult giraffe.

It’s no wonder that efforts are underway to mine gold from the Psyche asteroid and the moon!

Of all the minerals that are mined, none is more useful than gold, Geology.com says. That’s because gold conducts electricity, doesn’t tarnish, can be combined with other metals, can easily be melted and shaped, and has a brilliant luster.

Aside from the jewelry business, gold is used in the electronics, dental, medical, aerospace, and glassmaking fields, among others, according to Geology.com. And of course, it’s used to make gold coins and bars that retain their appeal and market attraction for decades, if not centuries. Historically, gold has been a long-term vehicle for storing wealth—an earthly source of wealth that’s out of this world.

You don’t have to travel light-years away to bring home physical gold. You can stay right where you are and buy online or call U.S. Money Reserve at 1-844-307-1589.