Gold in America: Do You Live in a Gold-Rich State?

Home » Gold » Gold in America: Do You Live in a Gold-Rich State? 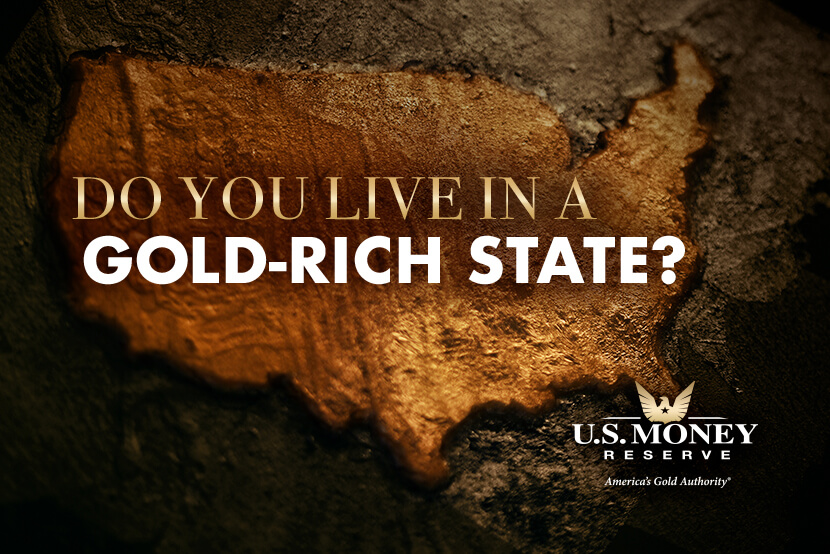 Swarms of people headed to California during the gold rush of the mid 1800s in search of great fortune. But did you know that gold has been found in every state in the U.S.?

The Gold Bullion Act of 1985 directed the Secretary of the Treasury to mint and issue gold coins in $50, $25, $10, and $5 denominations, and the gold for such coins had to be mined from natural deposits in the U.S. or in a U.S. territory. These gold coins continue to be minted, and gold continues to be mined in America. Find out where gold is mined in the U.S. and see whether you live in a gold-rich state.

Which State Produces the Most Gold?

While California was the epicenter of the 1800s gold rush, it no longer holds the title of the Golden State, although that remains its nickname.

The U.S. Geological Survey (USGS) crowns Nevada (known as the Silver State) as the top gold-producing state. The Goldstrike mining complex in sparsely populated north central Nevada is the number-one gold-mining operation in the U.S., followed by the Cortez Gold Mine Complex and the Carlin complex, both of which are also in north-central Nevada. Other major mines are in Alaska and Colorado.

In the 1960s, Newmont Goldcorp became the first company to take advantage of “invisible” gold deposits in Nevada, according to the book Going for Gold: The History of Newmont Mining Corporation, published in 2010.

“The birth and growth of modern gold mining have all the excitement and historical significance of the metal’s colorful past,” says the book, authored by Jack H. Morris.

“Instead of panning for nuggets, today’s corporate miners face heavy odds by having to extract value from ores containing as little as one hundredth of an ounce per ton, as 240-ton trucks ascend beetle-like from half-mile deep pits and where the capital cost of a new mine can top $2 billion.”

In 2019, Newmont and another major gold producer, Barrick Gold Corporation, formed a joint venture—Nevada Gold Mines LLC—that they say will rank as the largest gold-mining operation in the world (more than 124 metric tons mined in 2018). Nevada Gold Mines has set a production target of between 56 and 59 metric tons for the second half of 2019.

Which Other States Are Rich in Gold?

Aside from Nevada, Alaska, and California, states where gold often is mined, according to Geology.com, are:

In 2016, Nevada outpaced all other states for gold production, representing 170 metric tons of the precious metal. In second place was Alaska, at a little more than 1.6 metric tons.

Gold Mining Across the Country

Americans have been mining gold in the U.S. since 1799, when the precious metal was discovered in North Carolina, according to Business Insider.

Thanks to U.S. Money Reserve, you can find gold wherever you live—online or over the phone! Buy gold coins made from natural U.S. gold deposits today.