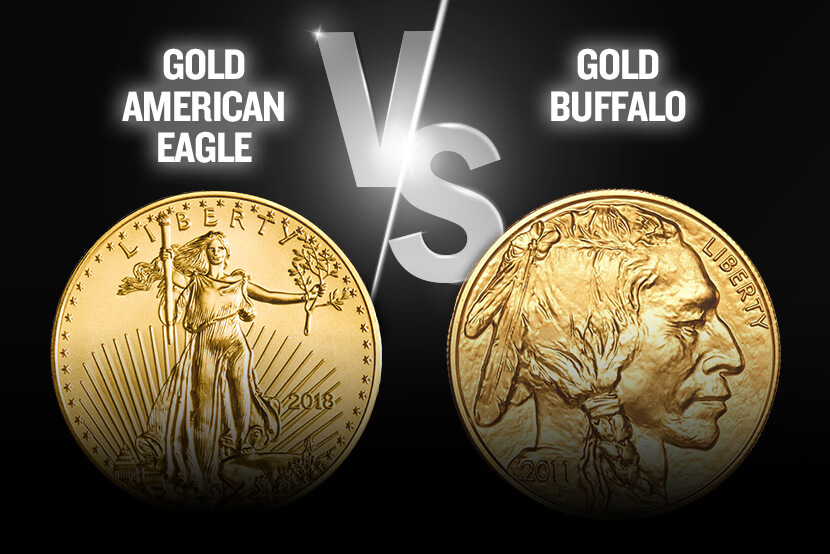 *Note that in 2008, the U.S. Mint also produced four denominations of the Proof Gold American Buffalo Coin, but not the bullion version.

American Eagle Gold Bullion Coins were first minted in 1986, having first been authorized by Gold Bullion Act of 1985 (Public Law 99-185). Signed by President Ronald Reagan, this act required that the U.S. Mint begin production of a family of 22-karat gold bullion coins in one-half, one-quarter, and one-tenth denominations, and outlined everything from the coins' diameter to their design.

With the passing of the Gold Bullion Act and the production of the Gold American Eagle Coin, the U.S. finally joined the national gold coin business and began competing with the likes of the Canadian Gold Maple Leaf and South African Krugerrand.

At the center of the coin’s obverse design is Lady Liberty’s full-length figure, her face framed by windswept hair and stamped with a fearless gaze. Her stance is unwavering, as she raises a torch in her right hand and an olive branch in her left. The Capitol building sits in the left background.

The image on the back of the Gold American Eagle Coin was created in 1986 by American sculptor Miley Busiek (now known as Miley Tucker-Frost). She first came up with her design concept in 1980 after watching Ronald Reagan’s acceptance speech at the Republican National Convention, reports Coin News Today.

The reverse side of the Gold American Eagle Coin features a family of bald eagles, with a male eagle flying above a nest and holding an olive branch in his talons. A female eagle sits in the nest, her wings protectively encircling two eaglets.

>>>Learn more about the design of the Gold American Eagle Coin.

Gold American Eagles are produced from gold mined in the United States—an important mandate outlined in the Gold Bullion Act of 1985. They are struck at the U.S. Mint at West Point, New York.

Gold American Eagles “use the durable 22-karat standard established for gold circulating coinage over 350 years ago. They contain their stated amount of pure gold, plus small amounts of alloy. This creates harder coins that resist scratching and marring, which can diminish resale [prospects],” says the U.S. Mint.

Gold American Buffalo Coins were first released to the public in June 2006 under Public Law 109-145, also called the Presidential $1 Coin Act of 2005. Title II of this act announced the striking and issuing of $50 Gold American Buffalo bullion and proof coins. It stipulated that James Earle Fraser's designs for the “Buffalo Nickel” be used on the obverse and reverse of the coin.

>>>Learn more about the history of the Gold American Buffalo Coin.

The front of the Gold American Buffalo Coin features a right-facing portrait of a Native American, an inscription of the year minted, and the word “LIBERTY.” The portrait is said to honor “the legacy of our land’s first inhabitants,” writes the U.S. Mint.

The profile isn’t of one single man. Rather, it’s a composite of several Native American men, including Chief Two Moons of the Cheyenne and Chief Iron Tail of the Lakota Sioux.

The back of the coin features a left-facing buffalo standing atop a rock or mound. His presence is all-encompassing and powerful, as his head and tail seem to press against the edges of the coin.

According to the U.S. Mint, the Buffalo “recalls the pioneering spirit of the Nation’s westward expansion.”

Some believe that the buffalo is based on an American buffalo named Black Diamond who lived in New York’s Central Park Zoo and was considered to be the largest buffalo in captivity. The coin’s designer, James Earle Fraser, lived in New York for more than a decade.

Like Gold American Eagles, Gold American Buffalos are produced from gold mined in the United States. They are also struck at the U.S. Mint at West Point, New York.

Today, American Gold Bullion coins, like the American Eagle Gold Coin and the American Gold Buffalo Coin, are the only gold bullion coins whose weight, content and purity are guaranteed by the U.S. Mint, making this family of coins a popular choice for discerning gold owners. Neither is a better buy than the other. Both gold coins are easy to buy and sell, and are respected in precious metals markets around the world.

There have been points in time when both the Gold American Buffalo and Gold American Eagle were hard to come by. For instance, in November 2015 the U.S. Mint sold out of one of the fractional-sized 2015 American Gold Eagles, with no more to be struck. And the Gold American Buffalo? The U.S. Mint stopped production during the financial crisis of 2008, ran out of 1oz. bullion inventory in 2010, and sold out of their 1 oz. proof inventory in 2015. If you tried to purchase one of these coins during such a time, you probably couldn't. Make sure two of America's most important gold coins are part of your portfolio. Learn more about both online and call 1-844-307-1589 to make them yours today!