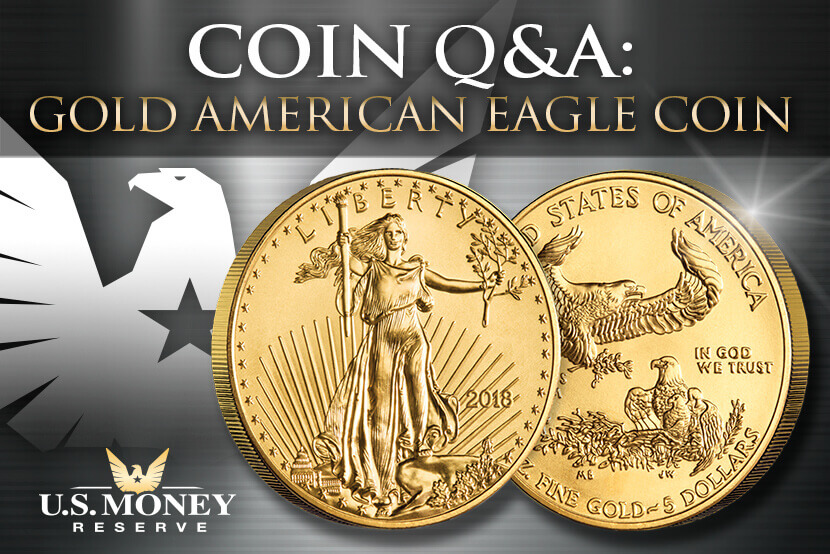 Are Gold American Eagle Coins pure gold? How much are Gold Eagles? Why buy them? If you have questions about one of the U.S. Mint's most popular gold bullion coins, U.S. Money Reserve has answers. Check out our easy to follow American Eagle Q&A to learn more about a gold coin that symbolizes American tradition, unity, and freedom.

1. What is the Gold American Eagle Coin?

The Gold Eagle is an official gold bullion coin of the United States. It was first minted in 1986, after President Ronald Reagan signed the Gold Bullion Act of 1985. The Gold American Eagle paved the way for the U.S. to begin competing with the likes of the Canadian Gold Maple Leaf and South African Krugerrand—two gold coins that had dominated the global coin market at the time.

Some people get confused when they read about a coin's fineness. Fineness, or purity, is the actual gold content in a coin, expressed parts per thousand. A Gold Eagle uses the durable 22-karat (.9167) standard established for gold circulating coinage over 350 years ago.

“Pure” gold, by comparison, has a fineness of 1.000. A coin of 1.000 fineness, however, would be easy to mold with your hands and so soft that it would be almost impractical to use.

3. How many different Gold American Eagle Coins are available?

4. Who designed the front and back of the Gold American Eagle?

The front of the Gold American Eagle is a rendition of the famous Double Eagle designed by Augustus Saint-Gaudens, an American sculptor and monument builder who lived from 1848-1907.

Contemporary American sculptor Miley Busiek, born in 1941 and now known as Miley Tucker-Frost, designed the back of the Gold Eagle in 1986.

5. How many Gold Eagles are minted each year?

Per the Gold Bullion Act of 1985, the American Eagle is to be issued in “quantities sufficient to meet public demand.” However, there have been times when the Mint has been unable to satisfy demand:

6. Where does the gold for Gold Eagles come from?

Every 22-karat Gold American Eagle Coin is made from solid gold mined here in America. This was another stipulation set forth by the Gold Bullion Act of 1985, which said:

7. Where are Gold Eagles minted?

The entire family of Gold Eagle bullion coins is minted at the West Point Mint in West Point, New York. The West Point branch is the newest mint facility, gaining status as an official branch of the U.S. Mint in 1988.

“The U.S. Mint goes to extraordinary lengths to produce a stunningly beautiful coin, including multiple strikes and polishing of coin blanks to obtain the design detail and shining field characteristic of the coin,” says Philip N. Diehl, President of U.S. Money Reserve, former Director of the U.S. Mint, and the one who initiated the Platinum American Eagle program in 1995.

8. What does it mean for Gold Eagles to be “guaranteed by the U.S. government”?

9. Where can you buy Gold American Eagle Coins?

10. Is now a good time to buy Gold American Eagles?

Yes! It's almost always a good time to buy physical gold, especially when you're looking at purchasing a gold coin that's as sought after and timeless as the American Gold Eagle.

Gold American Eagle Coins have long been a popular choice for discerning gold owners. If you still have questions about coin sizes, history, or anything else, please call 1-844-307-1589 to speak with a knowledgeable Account Executive. Or if you're ready to buy Gold American Eagles, feel free to order online or over the phone. U.S. Money Reserve is here to help enhance your portfolio today!