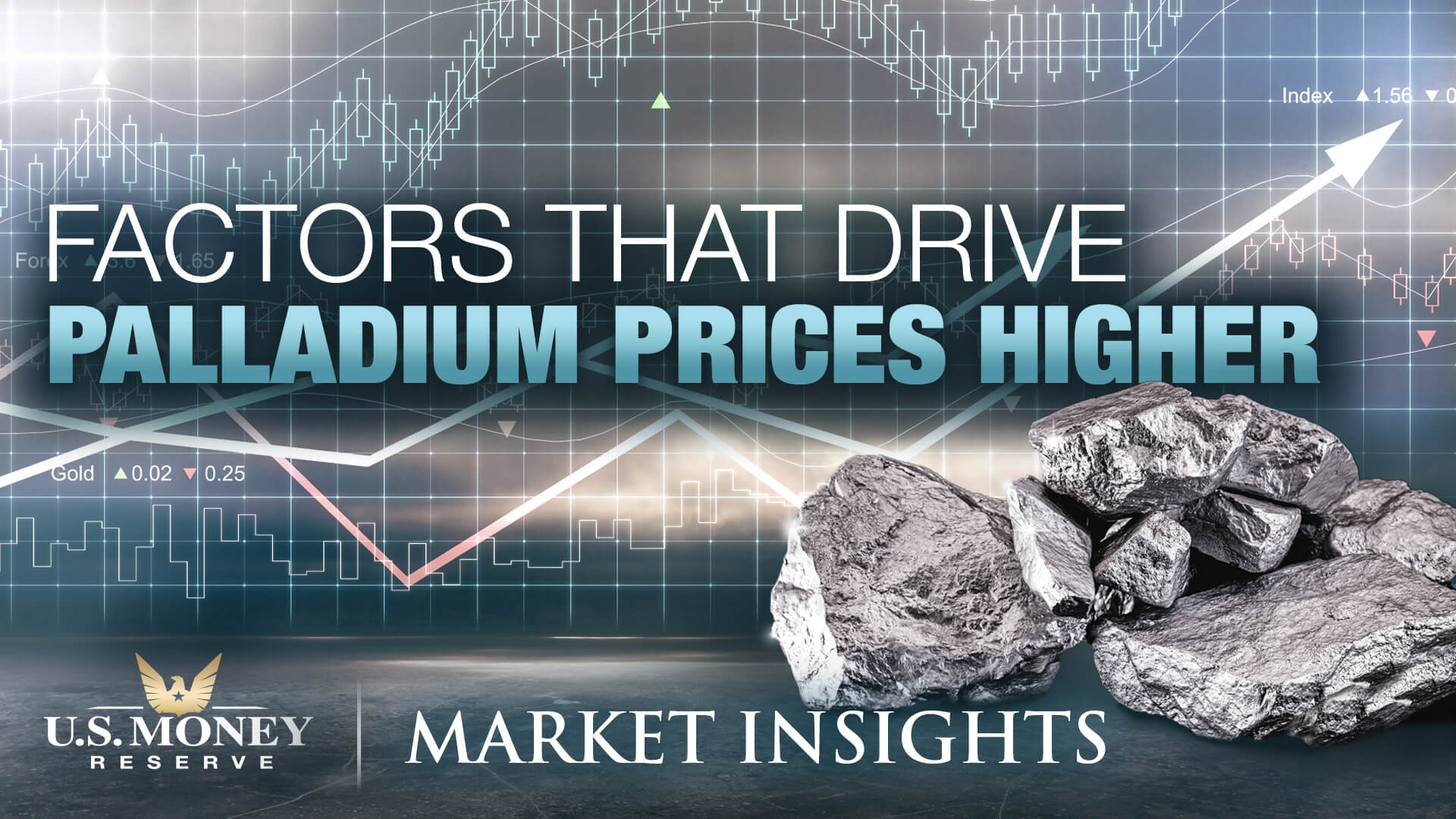 Palladium has stolen the spotlight from other precious metals lately, at times becoming the highest-priced metal on the market. What has historically driven palladium to new heights, and what might we expect in the future? Find out as you learn more about palladium’s foundational price drivers.

Palladium is a shiny, silverish rare metal. It’s 30 times more rare than gold, and its chemical composition is similar to that of platinum. Mines in Canada, Russia, South Africa, and the U.S. produce the majority of the planet’s palladium. Worldwide, about 210 metric tons of palladium were mined in 2018.

How Is Palladium Used?

As much as 85 percent of the world’s supply of palladium goes into catalytic converters. Manufacturers—primarily in North America and China—equip vehicles with these emission-control devices to convert toxic pollutants into carbon dioxide and water vapor, which are less harmful to the environment.

Why Are Palladium Prices So High?

The up-and-down price of palladium this year can be traced to old-fashioned supply and demand.

In general, demand refers to how many buyers desire a product. Supply refers to how much the market can offer to meet that demand. As demand for a product increases, prices rise.

In February 2020, the price of palladium soared past $2,700/ounce, a record high, thanks to significant demand from automakers. But by early May 2020, the price had fallen below $1,900/ounce, still the highest price among the four primary precious metals, as global auto sales slumped. Nevertheless, that price was well above the May 2010 level of around $500/ounce.

While palladium’s price has skyrocketed from 2010 to 2020 and remains far above historic lows, the recent drop from the historic high does represent a buying opportunity.

Shifts in the Auto Manufacturing Industry

This year’s decline in auto manufacturing and sales has knocked palladium “out of bed.” But the metal’s price is likely to climb as it continues to benefit from China’s clean air standards, which push “more palladium into every tailpipe in that country,” says R. Michael Jones, CEO of Platinum Group Metals.

Palladium’s trajectory has been similar to that of rhodium, another precious metal.

Like palladium, rhodium—one of the six metals in the platinum group—is commonly found in the catalytic converters of vehicles.

In March 2020, the price of rhodium climbed to $11,500/ounce but then plummeted to $2,750/ounce in early April before rebounding somewhat to $4,200/ounce in mid-May. The roller coaster of rhodium’s price aligns with the price activity of palladium, as both metals are heavily used in the battered automotive sector. But as with palladium, demand for rhodium is expected to rebound while supply continues to be constrained because of recent economic calamity.

It’s somewhat of a well-established trend: “Precious metals used in small quantities by the auto industry have a history of price spikes when demand outstrips supply,” Bloomberg notes.

UBS predicts a palladium deficit of 500,000 ounces in 2020, compared with nearly 1.2 million ounces in 2019. Overall, Bank of America Merrill Lynch remains bullish on palladium in light of this year’s projected output deficit.

In a poll by Reuters, experts anticipate the average price of palladium will be $2,100/ounce in 2020 and $2,150/ounce in 2021. If the long-term outlook for palladium strengthens, as many envision, prices in the neighborhood of $2,100/ounce might be attractive to buyers.

You have many options when it comes to precious metals. Call U.S. Money Reserve to learn more about palladium, along with gold, silver, and platinum.