Own Gold? Here’s Why You Should Keep an Eye on the European Parliamentary Elections

Home » Headline Gold News » Own Gold? Here’s Why You Should Keep an Eye on the European Parliamentary Elections 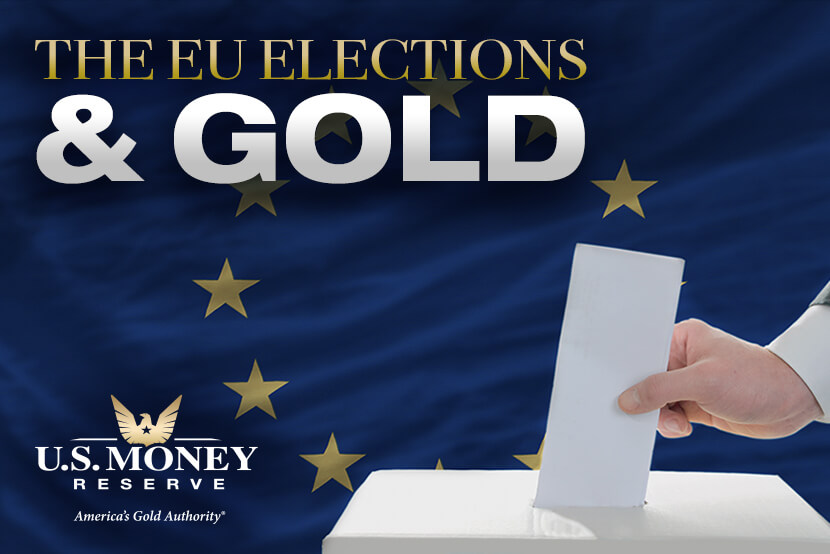 With the European Union already wracked by instability amid continued hand-wringing over Brexit, the upcoming European Parliament elections could shake up things even more—and could prompt more people to explore gold as a safe-haven asset. As America's Gold Authority®, U.S. Money Reserve is here to provide the insight you need to prepare yourself as a gold owner and buyer.

What are the European Parliamentary Elections?

From May 23 to 26, voters from the 28 governments that make up the European Union (EU) will choose members of the 751-seat European Parliament. The elections matter for two reasons.

According to The Guardian newspaper in London, the parliament will play a key role in shaping the next five years for the EU, as the coalition grapples with pressing issues such as faltering economic growth, indebted banks, migration, the rise of China, internal divisions and, last but not least, Brexit.

How could the elections impact gold prices?

The election promises to shake up the political landscape of the EU and possibly jumble the bloc’s financial picture. As such, some asset holders might turn to gold as a more stable asset in unstable times.

Well ahead of the parliamentary elections, asset holders were already wary about Brexit—which has been put off until Oct. 31—as well as the Italian government’s finances and its ties to the EU. As such, they were adding to the safe-haven holdings of gold-backed ETFs, according to the World Gold Council. The results of the European Parliament elections could spur even more people to gravitate toward gold.

“There is no shortage of storylines and political ramifications from an election this complicated and continental,” writes the Brookings Institution, a nonprofit think tank.

Those storylines include, of course, the economy.

Among voters in 10 EU nations surveyed in 2018 by the Pew Research Center, a median of 58 percent believe that when children in their country grow up, they’ll be worse off financially than their parents are. (In the U.S., that number jumps up to 67 percent.)

There’s a good reason for that pessimism in at least some parts of the EU. A recent report from Dutch financial services company ING finds that while the European economy has mostly recovered from the financial crisis, the economies of some pockets of Europe remain stagnant. CNBC.com notes that this could cause problems for monetary policymaking, affecting growth and inflation prospects and putting downward pressure on interest rates.

On the heels of a first-quarter uptick of 68 percent in gold purchases by central banks compared with the same period in 2018, central banks on both sides of the Atlantic continue to put monetary-policy tightening on hold, which counts as another factor that’s “likely to be supportive of gold,” Hewitt says.

Given current market dynamics, Hewitt expects gold to “remain an attractive hedge in 2019.”

In fact, Martin Huxley, global head of precious metals at financial services provider INTL FCStone, told CNBC.com in April that gold could hit $1,400 an ounce by the end of 2019. Huxley cited heightened purchasing activity by central banks as a factor in the predicted rise of gold prices, as well as concerns over global trade, the U.S. presidential election, and the EU’s woes. Those factors “will generally be supportive for gold,” he said.

How you choose to react to this historic event could define your portfolio’s performance. You may want to consider buying gold ahead of the European Parliamentary Elections. Call 1-844-307-1598 to speak with a knowledgeable Account Executive who can help you select the right gold products for you.