Looking Back: Biggest Economic Events of the Past 20 Years

Home » Headline Gold News » Looking Back: Biggest Economic Events of the Past 20 Years 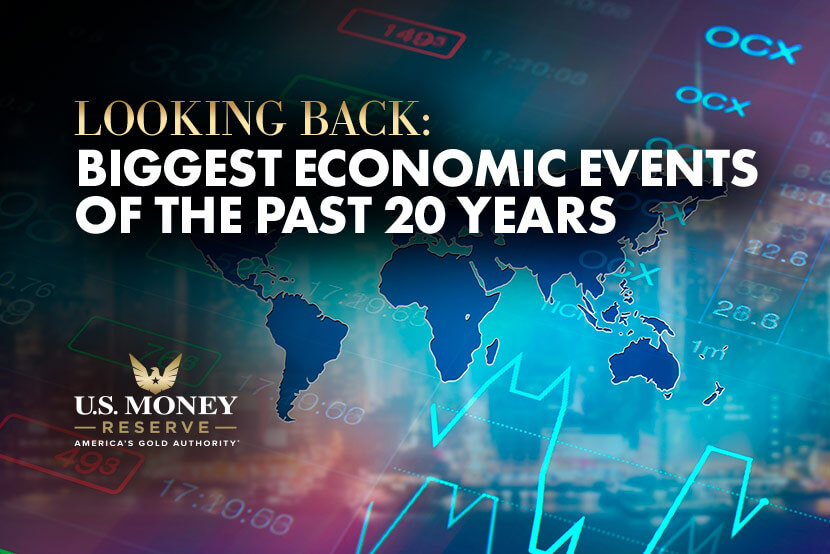 Since the dawn of the 21st century, we’ve experienced quite a few major economic events. Here, we take a look back at some of the biggest, how they’ve affected the world’s economy, and why we’ve been able to put our trust in gold through all of it.

A major economic event doesn’t always start with the stock market. The 9/11 attacks had an immediate negative impact on the U.S. economy.

According to Luis Portes, a professor of economics and finance at Montclair State University, the 9/11 attacks delivered a significant economic shock to the New York City and Washington, D.C., metro areas. But on a national basis, the U.S. economy bounced back a few weeks after the attacks. In making that determination, Portes cites the healthy post-9/11 performance of GDP (a barometer for economic activity), the stock market, the labor market, and consumer confidence.

To illustrate Portes’ point, we can look at a paper published in 2009 by the U.S. Department of Homeland Security, which found that the immediate impact of the 9/11 attacks was a 0.5% reduction in the country’s GDP growth and a 0.11% uptick in the U.S. unemployment rate.

From 2000 to 2001, the price of gold declined by less than 3%, suggesting that gold saw little change in response to the overall economic impact of 9/11.

On September 11, 2001, the price of gold climbed nearly 6%, as individuals sought out the safe-haven asset.

In the third quarter of 2002, the stock market saw its worst tumble since 1987. During the quarter, the closely watched Dow Jones Industrial Average tumbled 17.9%, reflecting the overall downturn in the stock market. The primary cause of the market’s distress: a sell-off of overvalued internet stocks.

In 2002, the average closing price of gold rose to $310.08/oz., up 14.3% from the previous year. Why? Because when the stock market has performed poorly, historically more people have gravitated toward gold, driving up the price of the yellow metal. This occurrence underscores the safe-haven stature of gold.

Anyone who lived through the Great Recession remembers it well.

The recession, which officially stretched from December 2007 to June 2009, was one of the worst financial disasters in U.S. history. The housing crisis, including lax regulation of mortgages and the dangerous proliferation of subprime mortgages, triggered the Great Recession.

According to the Insider news website, the 18-month recession sent the U.S. unemployment rate as high as 10%, caused millions of home foreclosures, erased $19.2 trillion in Americans’ net worth, and created a 4.3% drop in the country’s GDP.

By comparison, stocks lost 53.8% of their value from the peak of the recession to the trough, according to Forbes.

As had happened many times before, people flocked to gold during the Great Recession as a way to help shield their assets from financial stress.

“A rise in the price of gold may be a signal that the economy is struggling. As a result, in times of either a crisis or inflation, many [people] turn to gold to protect their principal,” according to a report published in 2013 by the U.S. Bureau of Labor Statistics.

In 2016, the citizens of the United Kingdom jolted the world by voting to withdraw from the European Union, a 28-country economic powerhouse. The Brexit vote, as it was called, contributed to geopolitical uncertainty. (The U.K. didn’t formally exit the European Union until 2020.)

The Balance website notes that the Brexit vote dampened growth prospects for U.S. companies operating in Europe, weakened the euro and the pound, and boosted the value of the U.S. dollar.

The year of the Brexit vote, the closing price of gold averaged $1,251.92/oz., up 7.4% from the previous year. The vote led to an immediate spike in the price of gold, and the price subsequently hit a two-year high as people around the world sought out gold as a safe-haven asset amid economic uncertainty.

The COVID-19 pandemic and accompanying recession rocked the global economy in 2020. Among the impacts:

“In uncertain economic times, [people] tend to put their money in gold. So it’s perhaps little surprise that gold prices started to rise at the beginning of the year as the coronavirus started spreading in China and Europe and [people] feared a global economic downturn,” NPR reported in July 2020.

Which economic events could happen in the next 20 years, and what can we learn from the past few decades? Follow U.S. Money Reserve on Facebook and Twitter to stay on top of economic trends and their effect on gold prices.