What’s the Difference Between Gold and Bitcoin?

Home » Gold » What’s the Difference Between Gold and Bitcoin? 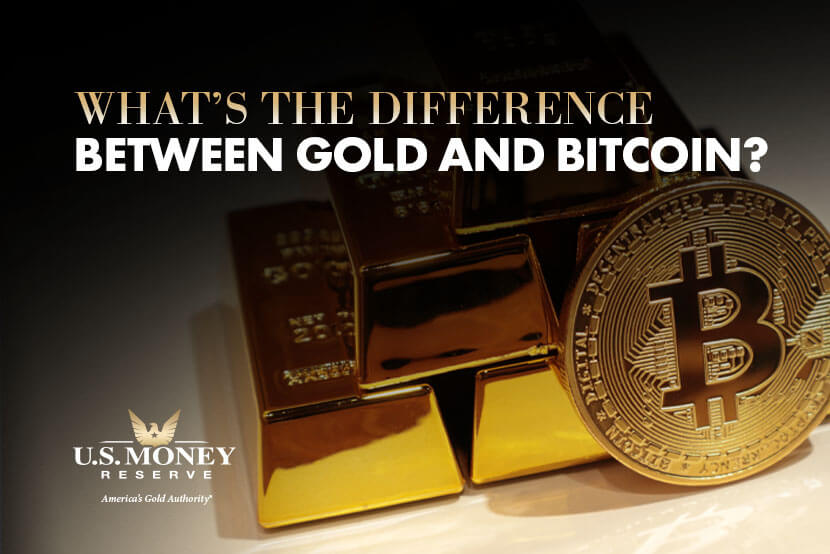 Bitcoin continues to steal the spotlight. Its price quadrupled last year, and in early 2021, its price hit $40,000 for the first time. Bitcoin is the new kid on the block with regards to portfolio diversification, while gold has a reputation for being a longstanding safe-haven asset. Why are the two so often compared to one another? Learn more in this comparison between gold and Bitcoin.

Gold Has Been Around Much Longer Than Bitcoin

The Bitcoin concept first emerged in 2009. In other words, as an asset, it essentially hasn’t even reached adulthood. Gold, however, is what you might call an elder statesman. The history of the yellow metal dates back more than 5,000 years.

“One thing that gold has undeniably been associated with throughout history is [market] value. Gold’s centuries of use as money, in international commerce, and later as backing for money plainly attest to this,” CoinWeek notes.

Gold Is Considered a Safe Haven, But Bitcoin Is Not

The World Gold Council points out that highly speculative and volatile cryptocurrencies like Bitcoin are not safe-haven assets. By contrast, gold has a track record as a safe haven and can maintain or increase its market appeal amid market turbulence.

In December 2020, analysts at Goldman Sachs said they do not see the rising popularity of Bitcoin “as an existential threat to gold’s status as the currency of last resort,” according to Business Insider.

“Hedging against market downturns, high inflation, and uncertainty is what gold does best. Gold is the ideal hedge during times of economic turmoil,” CoinWeek reports.

You Can Touch Gold, But You Can’t Touch Bitcoin

Bitcoin is a virtual currency that exists only digitally and can be purchased only online. Therefore, a buyer of Bitcoin can’t actually touch it, unlike coins made of metal. However, gold is a physical asset that you can touch and hold and buy in person, over the phone, or online.

“Bitcoin is still a mystery to many of us, probably because we can’t eat, see, or touch it,” The Washington Post notes.

Gold Is a Tangible Asset, While Bitcoin Is a Finite Virtual Currency

Supply might be Bitcoin and gold’s only similarity. Bitcoin’s creator, Satoshi Nakamoto, set Bitcoin’s supply cap at 21 million coins. The coins can be divided into smaller parts, but there will never be more than 21 million Bitcoin. Bitcoin can’t be created beyond the 21 million threshold, and existing Bitcoin can’t be destroyed, according to the SoFi lending platform.

Meanwhile, nearly 200,000 metric tons of gold have been mined over time, leaving close to 50,000 metric tons yet to be mined. Like Bitcoin, gold cannot be destroyed (only dissolved) and all of the gold ever extracted from the earth remains in existence. Gold also can’t be created. The process would involve nuclear reactions and be incredibly cost prohibitive.

Gold Has More Uses than Bitcoin

Jewelry, medical equipment, religious artwork, and many other items contain gold. Yet Bitcoin cannot be used as anything aside from virtual currency, also known as cryptocurrency.

“Gold has a variety of important real-world uses that make it worth the cost of digging out of the ground,” CoinWeek explains.

Bitcoin Has Historically Been More Volatile than Gold

Like many assets, gold’s prices fluctuate, but not as intensely as Bitcoin’s has shown.

“The ups and downs for gold pale in comparison to the wild volatility that Bitcoin has exhibited over the last decade. Simply put, Bitcoin’s volatility is orders of magnitude higher than gold’s. This complicates Bitcoin’s case as a stable store of wealth and a trusted medium of exchange,” CoinWeek explains.

Ready to buy gold rather than Bitcoin? Increase your portfolio diversification with an asset that has thousands of years of proven history. Download your free Gold Kit and call today to speak with one of our knowledgeable Account Executives.