3 Coins That Bring to Life the Meaning of Memorial Day 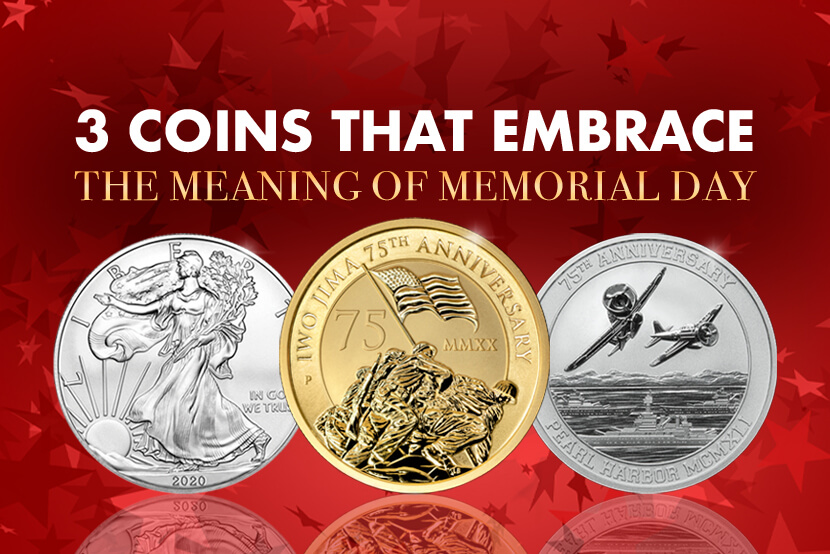 What Is the Meaning of Memorial Day?

Memorial Day, which became an official federal holiday in 1971, honors fallen service members. It originated in the years after the Civil War as a way for Northerners and Southerners to mourn military members who had died in action. Memorial Day, previously known as Decoration Day, falls on the last Monday of May.

President Richard Nixon, who signed the federal law establishing Memorial Day as an official holiday, touched on the meaning of the observance in a 1974 radio address.

“Peace is the real and right memorial for those who have died in war. They wanted and they deserve a world in which their brothers and sisters and their children and grandchildren will never have to be called upon, as they were, to fight for peace,” Nixon said. “Let that be the memorial we seek to build for them, and let us work together—the President, the people, Congress—to build it in the months and years ahead.”

A number of coins recognize the hard-fought freedoms cherished by Americans both in and out of uniform. These coins are tangible reminders of the sacrifices of U.S. service members and of America’s status as a great nation.

The fronts of both coins feature the iconic image of six United States Marines hoisting the American flag on the Japanese island of Iwo Jima in 1945. This famous image, which came to symbolize unity near the end of World War II, eventually appeared on a U.S. postage stamp and was cast as a bronze monument in Washington, D.C. The monument, named the United States Marine Corps War Memorial, was dedicated in 1954 to honor all Marines who have served our country since 1775.

“Among the men who fought on Iwo Jima, uncommon valor was a common virtue,” Navy Admiral Chester Nimitz said in 1945.

This series of coins commemorating the 75th anniversary of the attack on Pearl Harbor comes in both gold and silver.

Imperial Japan’s surprise bombing of Pearl Harbor, a U.S. naval base in Honolulu, on December 7, 1941, claimed the lives of more than 2,400 Americans. The dead included service members and civilians. The day after the attack, Congress declared war on Japan, bringing the U.S. into World War II.

In urging Congress to authorize the war declaration, President Franklin D. Roosevelt deemed December 7, 1941, “a date which will live in infamy.”

“I believe that I interpret the will of the Congress and of the people when I assert that we will not only defend ourselves to the utmost but will make it very certain that this form of treachery shall never again endanger us,” Roosevelt said in an address to the nation. “Hostilities exist. There is no blinking at the fact that our people, our territory, and our interests are in grave danger.” 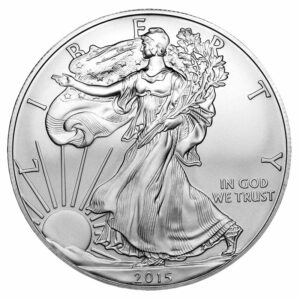 The Silver American Eagle coin salutes the patriotism and pride of the United States of America. First minted in 1986, this coin—one of the world’s best-selling silver coins—commands respect.

The front side of the coin pays tribute to our country’s history with the beautiful “Walking Liberty,” first designed for the U.S. half-dollar of 1916–1947. American sculptor Adolph A. Weinman created the homage to Lady Liberty, an eternal symbol of America’s freedom.

The back of the coin shows a heraldic eagle designed by John Mercanti, who was the chief engraver at the U.S. Mint. The eagle clutches an olive branch in one talon and arrows in the other. The bald eagle became the symbol of America in 1782.

Thirteen stars, representing the thirteen original U.S. colonies, are situated above the eagle’s head. The U.S. seal and the Latin phrase “E Pluribus Unum” (“Out of many, one”) also appear on the back of the coin.

Give yourself a physical reminder of the meaning behind Memorial Day—and a gift you’ll treasure for a lifetime. Call U.S. Money Reserve today to learn more about gold and silver coins that honor Memorial Day.