The Tricky History of Redesigning Coins: 3 Rare Instances of Redesigns 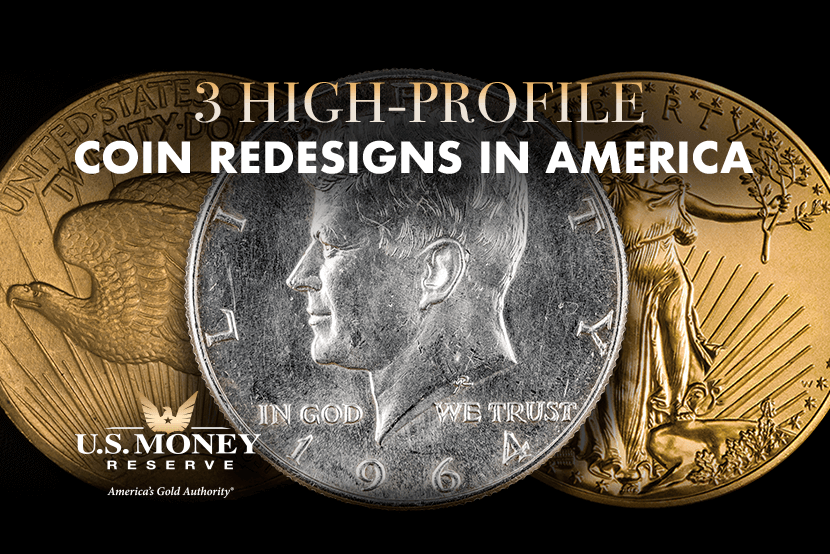 Whether born out of necessity or history, coin redesigns are relatively rare. There’s typically no predictable rhyme or reason to when redesigns happen. But when they do occur, they earn a place in what you might call the “Minting Hall of Fame.”

Follow along as we take you on a guided tour of three high-profile coin redesigns that were done for three very different reasons.

“I think the state of our coinage is artistically of atrocious hideousness. Would it be possible, without asking permission of Congress, to employ a man like Saint-Gaudens to give us a coinage which would have some beauty?” Roosevelt wondered.

Roosevelt then asked U.S. Mint Director George E. Roberts to reach out to Saint-Gaudens about undertaking this project. Saint-Gaudens agreed to accept the assignment.

Roosevelt pushed the Mint to tap Saint-Gaudens to redesign coins that could be changed without congressional approval—the one-cent coin and four gold coins. This coin redesign is unique for two reasons. One: Designs typically go through a long review and approval process that can involve the Mint, the Commission of Fine Arts, and the Secretary of the Treasury. Two: No U.S. coin had ever been designed by anyone other than a Mint employee.

The most famous and spectacular coin to emerge from Saint-Gaudens’ work was the Double Eagle Gold Coin, a $20 gold piece that debuted in 1907. It’s hailed as the most beautiful U.S. coin ever minted. The Mint issued the Ultra High Relief Double Eagle in 2009 to bring Saint-Gaudens’ full and masterful design to life. The feat wasn’t previously possible due to limitations in minting technology.

Within hours of the assassination of President John F. Kennedy on November 22, 1963, Mint Director Eva Adams phoned Chief Engraver Gilroy Roberts. Adams told him that serious consideration was being given to depicting Kennedy on one of the larger U.S. silver coins: the silver dollar, half-dollar, or quarter.

Five days later, Adams called Roberts again and authorized the project, explaining that the late president’s widow, Jacqueline Kennedy, preferred that her husband be depicted on the half-dollar. This would remove Benjamin Franklin from the half-dollar but would allow George Washington’s image to remain on the quarter, per Mrs. Kennedy’s wishes.

First minted in 1964, the Kennedy Half Dollar—designed by Roberts and his successor, Frank Gasparro—is still produced today. The original Kennedy Half Dollar contained 90 percent silver, with the silver content falling to 40 percent in 1965 and zero in 1971.

Gold and Silver American Eagle coins are getting a makeover. Specifically, the reverse sides of the coins are being redesigned to incorporate anti-counterfeiting technology. The redesigned coins will come out in 2021.

The design change is being made in conjunction with the 35th anniversary of the American Eagle coin program. The redesign will permit anti-counterfeiting technology to be added during the production of the coins.

“Since the early days of the Republic, the Mint has been very sensitive to the threat of counterfeiting,” Mint spokesman Todd Martin told Coin World magazine. “We have made progress in developing state-of-the-art anti-counterfeiting measures for bullion coins and are prepared to implement changes that will enhance the security of the gold and silver bullion coin program.”