Do Billionaires Buy Gold? You Bet. 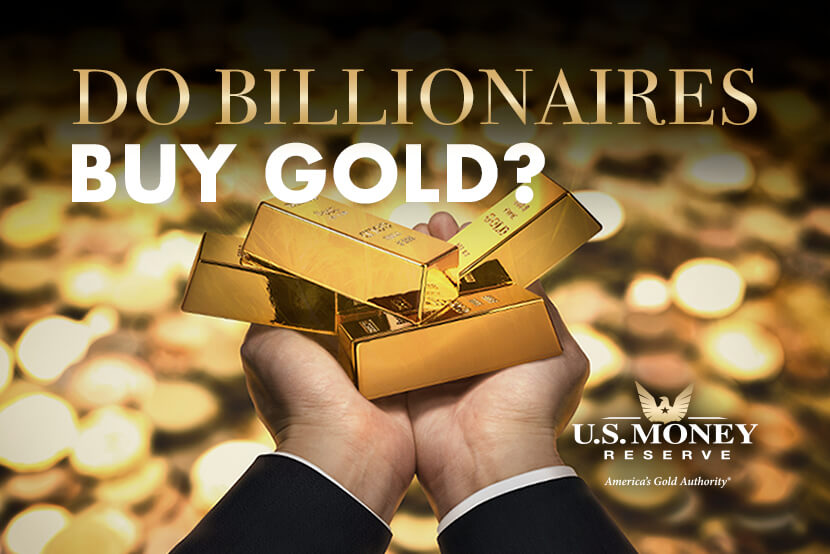 Jeffrey Gundlach. Naguib Sawiris. Paul Tudor Jones. Sam Zell. Ray Dalio. Lord Jacob Rothschild. These are all billionaires who believe in the power of gold, but for different reasons. Some buy gold for portfolio diversification. Others buy gold as a way to preserve wealth.

What can you learn from these billionaires? Follow along to find out why they buy gold—and why you might want to as well.

Buys gold as a hedge

Gundlach, a money manager dubbed the “Bond King,” views gold as a hedge against what he sees as a weakening U.S. dollar. Gundlach’s net worth is pegged at $2.1 billion.

In late August 2019, the price of gold hovered around $1,500 an ounce. That’s an increase of 400 percent since Gundlach first bought gold.

Buys gold as a means of crisis protection

Sawiris, an Egyptian billionaire worth about $2.9 billion, put half of his net worth in gold in mid-2018 in an effort to protect himself from a potential stock market crash and to take advantage of gold’s potential upside.

People “tend to go to gold during crisis and we are full of crises right now,” Sawiris said in April 2018. “Look at the Middle East and the rest of the world.”

Buys gold as an antidote for equities

Jones, a hedge fund manager whose net worth is estimated at $5.1 billion, says gold “will be the antidote for people with equity portfolios” amid fears of a global economic downturn, including the real possibility of a U.S. recession in the future.

Gold “has everything going for it in a world where rates in the U.S. are conceivably going to zero,” Jones told Bloomberg in June 2019.

Buys gold as a hedge

Zell, a 77-year-old real estate titan whose net worth is estimated at $5.5 billion, told the Bloomberg news service in January 2019 that he bought gold for the first time in his life as a “good hedge.” Although Zell didn’t cite the type of hedge, gold is widely known as a hedge against inflation, currency depreciation, and the weak performance of various other asset types.

Buys gold as a store of wealth and diversification

When someone with a net worth of $18.7 billion praises the power of gold, you might want to pay attention. Dalio, founder of the world’s biggest hedge fund, believes gold is attractive as a store of wealth and a means of portfolio diversification.

In a July 2019 post on LinkedIn, Dalio made a case for gold.

“One factor tipping the balance toward gold is that too many other asset types are plagued by low returns,” Dalio wrote.

As such, gold shines, he said, because it performs well when currency is depreciating and when domestic and international conflicts are flaring.

“For another thing,” Dalio wrote, “a ‘better balanced’ portfolio that includes gold could reduce risk and enhance returns.” He says a well-diversified portfolio should contain a decent share of gold.

The net worth of Lord Jacob Rothschild, a British banker, and the rest of the Rothschild dynasty is a major source of speculation. But he and his clan are easily worth billions of dollars.

Gold represents some of Lord Jacob’s wealth. He favors gold as a method of generational capital preservation and as a store wealth.

In 2016, Lord Jacob famously declared that the Rothschild family was dumping the U.S. dollar and replacing it with other currencies, as well as gold. Changes in yields and monetary policy prompted that shift.

It’s easy to understand why gold appeals to the Rothschild family. The Rothschilds have been involved in the mining, refining, and trading of gold since the early 1800s.

You don’t have to have billions, millions, or even hundreds of thousands of dollars to apply the wealth strategies of the billionaires we’ve mentioned here. Your portfolio can benefit from even one gold coin or bar. We can walk you through the purchase. Call 1-844-307-1589 for a one-on-one consultation with an Account Executive today.