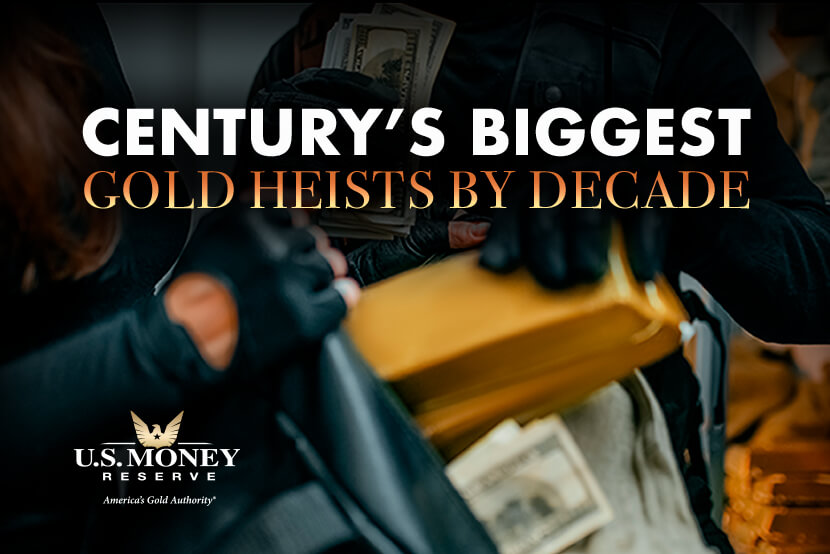 For many, gold’s allure can be hypnotic. It drives desperate people—even entire nations—to commit dangerous gold heists. Despite facing an array of security obstacles, some people succeed with their crimes.

The past century alone has given us some of the biggest gold heists ever. As America’s Gold Authority®, we break down the most noteworthy ones from the past century.

Our century of gold heists starts on the low end of the financial spectrum. Two aspects make this one stand out:

What: The Croydon Aerodrome Gold Robbery (aka “the Imperial Airways Gold Heist”)
Where: South London
When: March 6, 1935
How Much: 44 pounds of gold bars and coins

While more gold was involved in this crime than in the Farmers State Bank Heist, the “Croydon Aerodrome Gold Robbery” offered far less drama.

Three suspects stood trial separately, but only one was convicted. The gold, unfortunately, was never recovered.

Wars cost money, and Nazi Germany officials sought to finance their battles with gold stolen from citizens, companies, countries—anywhere gold could be found. Their plunder included half a billion dollars taken from foreign governments.

The Nazis’ greed ultimately went unrewarded, though, thanks to the eternal heroics of the Allied soldiers.

It’s now known as Pearson International, but it used to be Malton Airport—site of the mysterious heist of $215,000 CAD in gold bars.

What makes it mysterious? Consider this:

What: The Great Winnipeg Gold Heist
Where: Winnipeg, Canada
When: March 1, 1966
How Much: Approximately $385,000 CAD in gold, roughly worth $3 million CAD today

The gentlemen responsible for pulling off this heist knew what they were doing. With props that included Air Canada employee uniforms, a stolen Air Canada truck, and fake waybills (used to provide carriers with information about the goods they were transporting), the robbers pulled off the Great Winnipeg Gold Heist without firing a single shot.

Unfortunately for the criminals, fingerprints linked them to the crime, helped authorities recover the gold, and put the mastermind in prison until 1974.

What: British Bank of the Middle East Heist
Where: Beirut, Lebanon
When: January 20, 1976
How Much: 12 tons of gold bars

Eight men associated with the Palestine Liberation Organization blasted through a wall that the British Bank of the Middle East shared with a church. From there, locksmiths helped open a vault and make off with an almost unimaginable amount of gold: 12 tons.

Authorities never recovered the gold, nor was anyone charged with the crime.

The Brink’s-Mat incident is the biggest gold robbery in Britain’s history. It took six armed men plus an insider (a security guard) to pull it off. While the thieves expected to find about £3 million in loot, what they ended up finding and taking was an astonishing £26 million in gold bullion, diamonds, and cash—a haul that’s worth more than £87 million today.

Of the six conspirators, two ended up imprisoned for many years. The other four avoided convictions related to this crime. And the gold? It was never recovered.

Such was the size of the theft that the BBC once reported claims that “anyone wearing gold jewelry bought in the U.K. after 1983 is probably wearing Brink’s-Mat” gold.

What: Kerry Packer Safe Cracking
Where: Sydney, Australia
When: April 1995 (specific date undetermined)
How Much: More than 600 pounds of gold bullion worth $5.4 million AUD at the time

Investigators believe pillow talk between a wealthy executive’s former secretary and her criminal boyfriend led the boyfriend to literally cart away more than 600 pounds of gold kept in the executive’s safe.

Police suspected the secretary’s criminal boyfriend—only ever identified as Mr. X—because the vault was cracked so expertly, and he was one of the few they knew who could pull off such a job. That the security staff spent its time at a club next door rather than faithfully executing their duties certainly helped Mr. X.

Despite long stints of surveillance, however, the chief suspect never gave himself away. Investigators made no arrests and never recovered the gold.

A nurse who made tens of thousands of real dollars amassing a faux fortune playing the online video game World of Warcraft cashed out her virtual haul and purchased 75 bars of gold bullion.

What she did is called “gold farming.” It involves selling virtual items for real currency. But Kristina Finchman’s fake money ended up buying her real problems. Her house was robbed multiple times, and all of her possessions were stolen, including her wall safe filled with gold. A man she met online, who ended up becoming her real-life boyfriend, was accused of the theft.

Spoiler alert: The Summer Bliss Robbery is one very expensive unsolved caper, with hundreds of pounds of gold never recovered and no one ever convicted of the crime.

The mystery started with six men boarding a fishing boat named the Summer Bliss, on which gold was being transported. The men assaulted the boat’s captain, grabbed the gold, and disappeared within minutes.

Authorities made multiple arrests over the following months, but none resulted in a conviction because of legal obstacles that stemmed from conflicting reports and witness discrepancies.

Learn the Latest About Gold

Want to know some of the safest ways to store your gold? We have the answers right here.