Which Is Better in the Long Term: Gold or Cryptocurrency?

Home » Gold » Which Is Better in the Long Term: Gold or Cryptocurrency? 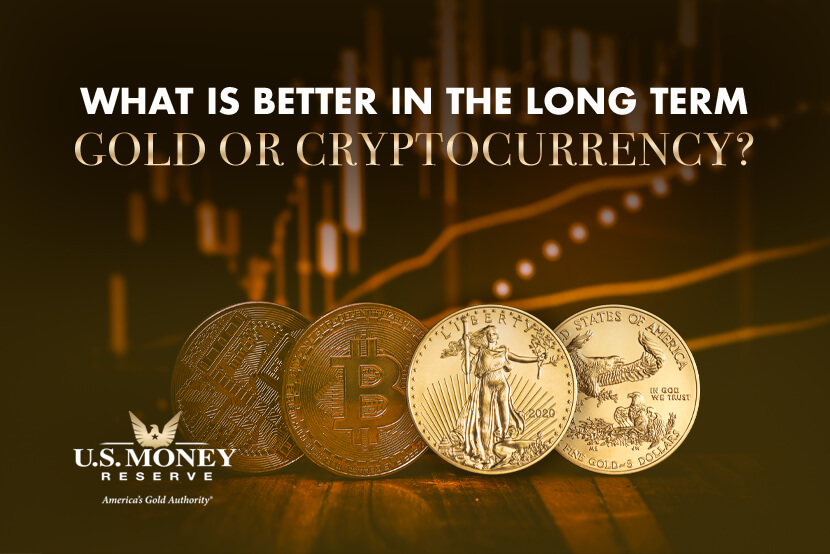 If you’re a fan of gold, you’re familiar with its long-term appeal and performance potential. You also might be familiar with a relatively new asset, Bitcoin, which is a cryptocurrency that’s been dubbed “digital gold.” But how do cryptocurrency and—more specifically—Bitcoin and gold compare? Are we looking at a new form of gold?

The History of Cryptocurrency vs. Gold

Cryptocurrency is the new kid on the block. As the IRS explains, cryptocurrency is a type of virtual currency that uses cryptography to validate and secure transactions that are digitally recorded on a “distributed ledger,” such as a blockchain.

Bitcoin emerged in 2009 as the first cryptocurrency, and its popularity has taken off since then. An even newer kid on the cryptocurrency block than Bitcoin, Monero, debuted in 2014. Monero’s appeal is that it takes the privacy and anonymity of Bitcoin transactions to a new level. Unlike Bitcoin, there is no preset total supply of Monero.

By contrast, gold is the old kid on the block. Its origins date back more than 5,000 years. In fact, it was one of the first metals to be mined. Gold coins premiered as a form of currency around 550 B.C., predating the introduction of paper money.

The Stability of Cryptocurrency vs. Gold

Given that it’s in its infancy, cryptocurrency has a limited track record. Comparatively, gold has a long track record.

Referring to cryptocurrency, the U.S. Securities and Exchange Commission points out that there might be “significant risk involved in putting your money into something that hasn’t been around very long.”

Plus, the price of a cryptocurrency can be extremely volatile.

“A cryptocurrency’s value can change by the hour. An [asset] that may be worth thousands of U.S. dollars today might be worth only hundreds tomorrow. If the value goes down, there’s no guarantee that it will go up again,” the Federal Trade Commission notes.

Gold, however, has a more substantial history than cryptocurrency—a history we can learn from.

ConsumerAffairs stresses that “one of the main things gold bullion has going for it is that it’s a tangible asset you maintain control of, no matter what happens to the global economy.”

That’s not necessarily the case with cryptocurrency, which can be a wildly out-of-control asset. Unlike gold, cryptocurrency is not considered a safe haven by many analysts.

Bitcoin, the king of cryptocurrency, “is still widely viewed as an unconventional holding,” according to MarketWatch.

Duke University professor Campbell Harvey adds that cryptocurrency has not acted like a safe haven amid today’s global economic challenges.

And Forbes contributor Roger Huang argues that cryptocurrency can’t be put into the same safe-haven category as gold. The value of Bitcoin and other cryptocurrencies, as opposed to gold, “doesn’t reside in an established history of commercial usage due to its anti-corrosive or conductive properties or long-established cultural tradition of how shiny is better.”

It’s highly doubtful that cryptocurrency would ever replace gold. Why? For two reasons: One, gold’s tangible nature and intrinsic benefits can never be fully replaced by a digital entity. Two, the future of cryptocurrency is relatively uncertain, whereas the future of gold continues to remain bright, given its more than 5,000-year performance history. And perhaps most importantly, gold has historically been a less volatile commodity than cryptocurrency.

“For now, gold stays gold as a hedge against financial uncertainty, and Bitcoin stays Bitcoin as a speculative [asset],” according to Forbes contributor Xolali Zigah.

Which Is Better in the Long Term?

Instead of asking which is better for the long term, gold or cryptocurrency, you might want to first ask which one has a history we can learn from—a history we can rely on? Bitcoin is about 11 years old, while gold is thousands of years old. What does that say about the longevity of each asset? If you look to the definition of “long term,” which means “occurring over or relating to a long period of time,” then there is one answer to consider more than the other.

Call U.S. Money Reserve to discuss the historical performance and future potential of physical gold. Knowledgeable Account Executives are standing by to have a one-on-one conversation with you.