12 Must-Know Facts About the Battle of Iwo Jima 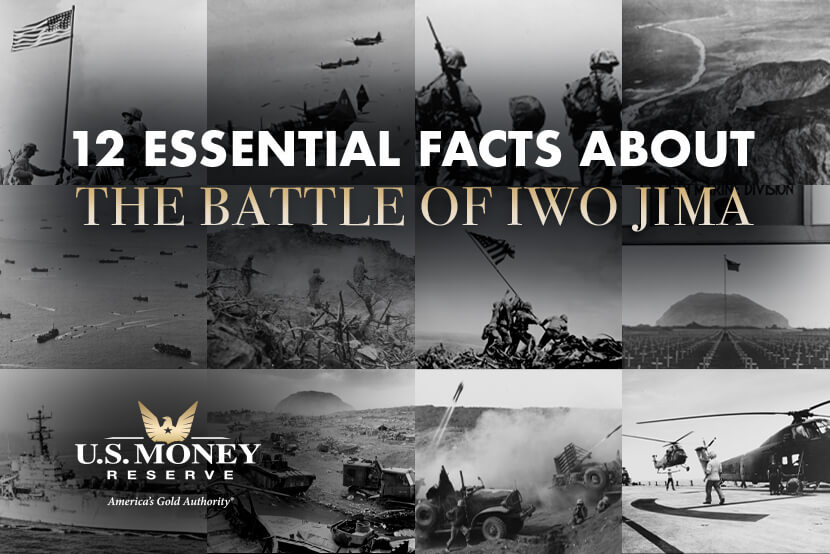 Though the island of Iwo Jima covers just eight square miles, the Battle of Iwo Jima lasted five weeks. And the iconic photo of soldiers raising a flag at the end of the battle? Some of those soldiers were misidentified for decades.

“A hallowed event in American military history, [the Battle of] Iwo Jima has come to epitomize the fighting spirit of the U.S. armed forces, particularly the Marine Corps,” according to the Live Science website.

In this blog post, you’ll learn 12 sometimes overlooked facts about the Battle of Iwo Jima.

Located in the Pacific Ocean, this tiny volcanic island is about 750 miles off the coast of Japan.

2. Who fought at the Battle of Iwo Jima?

U.S. Marines invaded this Japanese island on February 19, 1945, toward the end of World War II, and engaged in battle with the Imperial Army of Japan. The battle ended on March 25, 1945.

3. How many service members fought at Iwo Jima?

About 70,000 U.S. Marines and sailors and 22,000 Japanese soldiers took part in the battle on the island. In all, the United States committed more than 110,300 military personnel to the fight, including Marines, naval crews, and aircrews.

4. How many U.S. ships and aircraft were involved?

The United States deployed 17 aircraft carriers and 1,170 aircraft for the battle.

5. How many Japanese soldiers were captured?

An estimated 3,000 Japanese soldiers refused to surrender, though, and ended up living in Iwo Jima’s 11-mile stretch of underground bunkers. All of them eventually surrendered, but the last ones didn’t do so until January 1949, well after the war had concluded.

6. How many American casualties were there?

The battle caused about 26,000 American casualties, including nearly 6,800 deaths. It’s one of the bloodiest battles in Marine Corps history.

Note that casualty and death are not necessarily the same thing. The Marine Corps Casualty Procedures Manual defines a casualty as “any person lost to his organization by reason of having been declared dead, wounded, injured, diseased, interned, captured, missing; or a person whose whereabouts or stats have not been determined, provided it can reasonably be determined he is not in an unauthorized absence status,” whereas death refers to “an individual whose remains are positively identified and who has been pronounced dead by a medical or other qualified authority.”

7. How many Medals of Honor were awarded?

Twenty-seven Marines and sailors received Medals of Honor for their service at Iwo Jima. Most of those honors were given posthumously. That’s the highest number of Medals of Honor awarded for one U.S. military battle.

8. How many Iwo Jima Medal of Honor recipients are still alive?

Only one Medal of Honor recipient from Iwo Jima remained alive as of May 2020. Hershel “Woody” Williams, then a Marine corporal, received the Congressional Medal of Honor from President Harry S. Truman in October 1945. In May 2020, Williams was 96 years old.

9. What’s the story behind the famous flag-raising photo from Iwo Jima?

On February 23, 1945, Associated Press photographer Joe Rosenthal snapped a picture of Marines raising a flag at the summit of Iwo Jima’s Mount Suribachi after the U.S. captured it. Rosenthal won a Pulitzer Prize for the photo, which appeared in newspapers around the world. The image served as a model for the Marine Corps War Memorial near Arlington National Cemetery.

The occasion was actually the second flag-raising ceremony at Mount Suribachi. U.S. military leaders thought the U.S. flag used during the first flag-raising was too small, so they staged a second ceremony with a larger flag.

10. Who were the men shown in the iconic photo?

11. What are some of the most popular movies about Iwo Jima?

In 2006, the legendary actor-director Clint Eastwood released two movies about the Battle of Iwo Jima, Flags of Our Fathers and Letters From Iwo Jima.

Flags of Our Fathers is based on the bestselling book by John Bradley’s son James Bradley. Navy hospital corpsman John Bradley participated in the first flag-raising, not the second, and was not photographed in the final iconic photograph. However, for more than 70 years, it was believed that Bradley was in the picture. An internal investigation in 2016 found that Pfc. Harold Schultz was misidentified as Navy hospital corpsman John Bradley.

Flags of Our Fathers is one of many films you can watch to immerse yourself in WWII history. Learn more about WWII and Iwo Jima in two upcoming documentaries cosponsored by U.S. Money Reserve: 1st to Fight: Pacific War Marines and Return to Iwo Jima (scheduled to air later in 2020).

The year 2020 marks the 75th anniversary of the Battle of Iwo Jima, an occasion that’s being memorialized around the world by all types of groups.

American and Japanese veterans have gathered at cemeteries, the National Museum of the Marine Corps has hosted public events and speeches, and servicemen and women have gathered at bases like Camp Pendleton to honor veterans of the battle.

In fact, between February 19 and March 26, 2020, every unit in the Fleet Marine Force took a moment to honor the legacy of Iwo Jima, “whether through a formation, battle study, wreath-laying, or simply a moment of quiet reflection,” as directed by U.S. Marine Corps General David H. Berger.

Public events and gatherings aren’t the only ways people are honoring the battle’s 75th anniversary. U.S. Money Reserve launched the Iwo Jima coin series to pay tribute to one of the most prominent moments in history. These government-issued gold and silver coins were produced in limited quantities and are not widely available. Call now to secure a tangible asset and reminder of a period that transformed our nation forever.