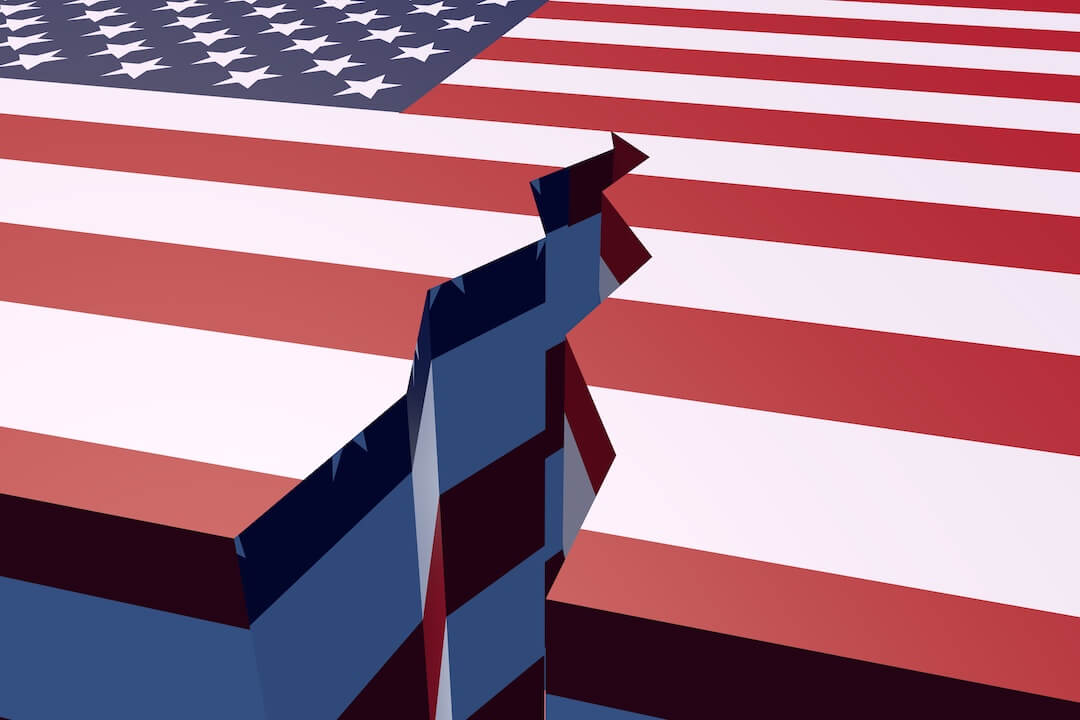 Back in 1858, as a candidate for the U.S. Senate, Abraham Lincoln made a famous speech to his Republican colleagues in the Illinois Hall of Representatives. The speech, entitled “A house divided against itself cannot stand,” was considered radical at the time. It was a lecture about “putting an end to slavery agitation,” and while it was dubbed morally courageous, it was also politically risky for the mid 1800s.

Lincoln understood that political polarization is destructive; it erodes national unity and American ideals. Indeed, the very cause of the Civil War was the growing divide between the North and the South, in which slavery, succession, and states’ rights—along with clashing views on taxation and tariffs—were systematically tearing the United States apart.

It culminated in a “War Between the States” (1861–1865), which became America’s bloodiest conflict. Some 620,000 American lives were lost in the Civil War. President Abraham Lincoln’s famous Gettysburg Address, which called upon the preservation of the Union, was delivered in November 1863. The war ended in May 1865, three weeks after Lincoln’s assassination. The Civil War left the American South in ruins: From roads to farms to factories, the Southern economy was broken.

Lincoln understood the toxic political climate that had overtaken the country. On his way to Washington in February 1861, he is quoted as saying, “If the great American people will only keep their temper, on both sides of the line, the troubles will come to an end, and the question which now distracts the country will be settled just as surely as all other difficulties of like character which have originated in this government.”

Much like in Lincoln’s day, we are now profoundly divided along political and ideological lines. We’ve rarely seen this level of hyper-polarization in contemporary times, as the “left” and the “right” differ dramatically on issues of legislation, regulation, taxation, and immigration.

Now, no one is suggesting that we’re headed for a Civil War, but we may well be facing endless gridlock and legislative logjams that could undermine our current economic boom.

Despite record low unemployment, surging GDP, and rising wage growth, Democrats won control of the House in the recent midterm elections. The Republicans held onto the Senate by a narrow margin.

In the days since the election, we’ve been told that shifts in political power are good, and we’ve been reminded that a divided Congress has historically found ways to work together. Some have even suggested that a split government is good for the markets. But the current divide seems different—because America is different.

A recent Pew Research Poll indicates that a majority of Americans now say that discussing politics with “the other side” is extremely stressful. And the ideological overlap that was present between the two parties in prior generations has now diminished—meaning the “moderate middle” appears to be gone.

The new Democratic majority in the House has talked about launching new investigations, broadening the Russia probe, and issuing a host of new subpoenas to dramatically ramp up oversight of the Trump administration.

This is not exactly a plan for prosperity—rather a warning of “turbulence ahead.”

President Lincoln suggested that America would never be destroyed from the outside, and as the United States remains the world’s foremost economic and military power, that sentiment holds true today. But he also warned that we are more than capable of destroying ourselves from within.

Unfortunately, the United States has not been this disunited in generations. And it feels like the only thing that we can agree on is the fact that we don’t agree on anything.

This is the ideal climate for congressional gridlock, legislative bottlenecks, political stalemates, and economic stagnation. It’s also the perfect environment in which to hold physical gold.