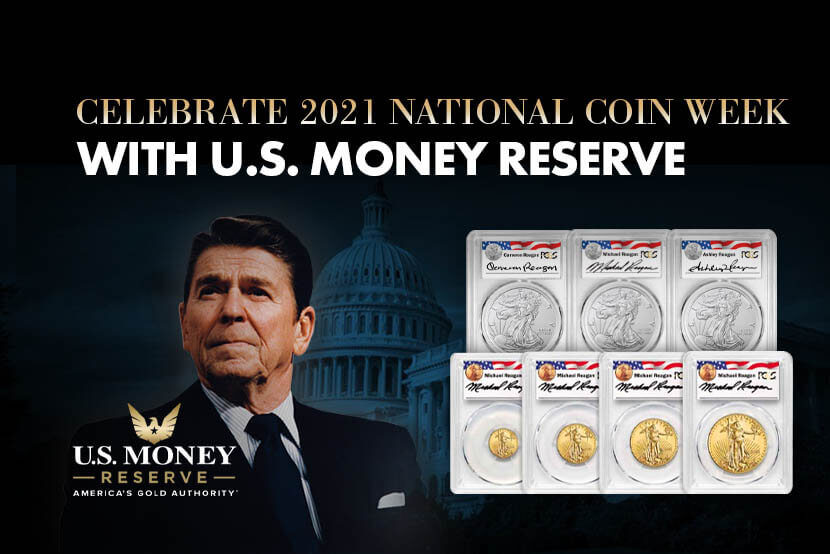 National Coin Week honors the United States’ rich history of coinage and paper money, a history that President Ronald Reagan brought national attention to when he officially declared the third week in April as National Coin Week. He reignited American interest in precious metals by launching two of the most successful coin programs in the history of the U.S. Mint. Learn more about 2021 National Coin Week and how you can celebrate the occasion with U.S. Money Reserve!

In 2021, the Mint is celebrating the anniversaries of three special coins. Because of those anniversaries, the theme of this year’s National Coin Week is “Money, Big & Bold.”

“Since the beginning of history, coins have played an important role in the story of civilization. They reflect the economic development of their country of origin, as well as the scientific advancement and artistic values of the people who produce and use them,” Reagan’s proclamation states. “Today, millions of Americans collect coins for both pleasure and profit.”

Aside from the Ronald Reagan Presidential $1 coin, which the Mint released in 2016, two new coin sets honor the legacy of the 40th president and the 35th anniversary of the American Eagle program—a program Reagan kicked off when he signed the Gold Bullion Act of 1985.

U.S. Money Reserve released the silver coin set on February 6, 2021, which would have been Reagan’s 110th birthday. The set recognizes Reagan’s role as the father of the Silver American Eagle program.

To observe the 35th anniversary of the American Eagle program, the Mint announced in 2019 that the 2021 issues would debut brand-new reverse designs for the first time in the history of the series. However, unable to keep up with exceptional demand during last year’s gold rush, the Mint could not complete the new designs on time. Instead, the Mint decided to produce a limited run of 2021 Proof Gold Eagles with the original “Type 1” design before changing designs later this year.