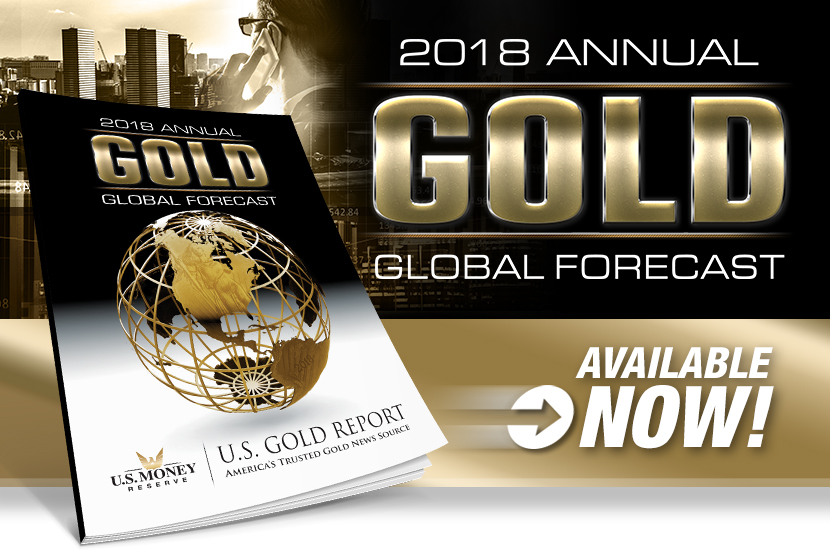 Bubbles, meltdown fears, and irrational exuberance. Is this a toy store on Black Friday? Nope. This is the American reality. It's time to talk about the economy, stock market, future of gold prices, and so much more.

Even if you made it through 2017 and the first part of 2018 financially unscathed, there's little chance you escaped the rollercoaster-like turmoil of partisan bitterness, geopolitical tensions with everyone from Russia to North Korea, and random, low-tech domestic terror attacks.

What can you expect for the rest of 2018? How can you come out unscathed, both mentally and financially? U.S. Money Reserve, America's Gold Authority®, is here to tackle these questions for you.

Read on for a taste of the biggest 2018 gold market predictions from industry analysts and download our free eBook, 2018 Annual Gold Global Forecast, for more data-driven insights you can't afford to ignore.

The Bulls are Getting Tired.

Is There a Bear Market on the Horizon?

Can the markets go up forever? Nothing can. The longer the Wall Street bull market runs unchecked, the greater the size and potential scope of correction.

In general, a higher P/E can indicate that a stock is overvalued. Individual stocks have P/E ratios, as does the overall S&P 500. The only time the markets looked more expensive was just before the dot.com bubble burst around 1999/2000. See the peak in the chart below? 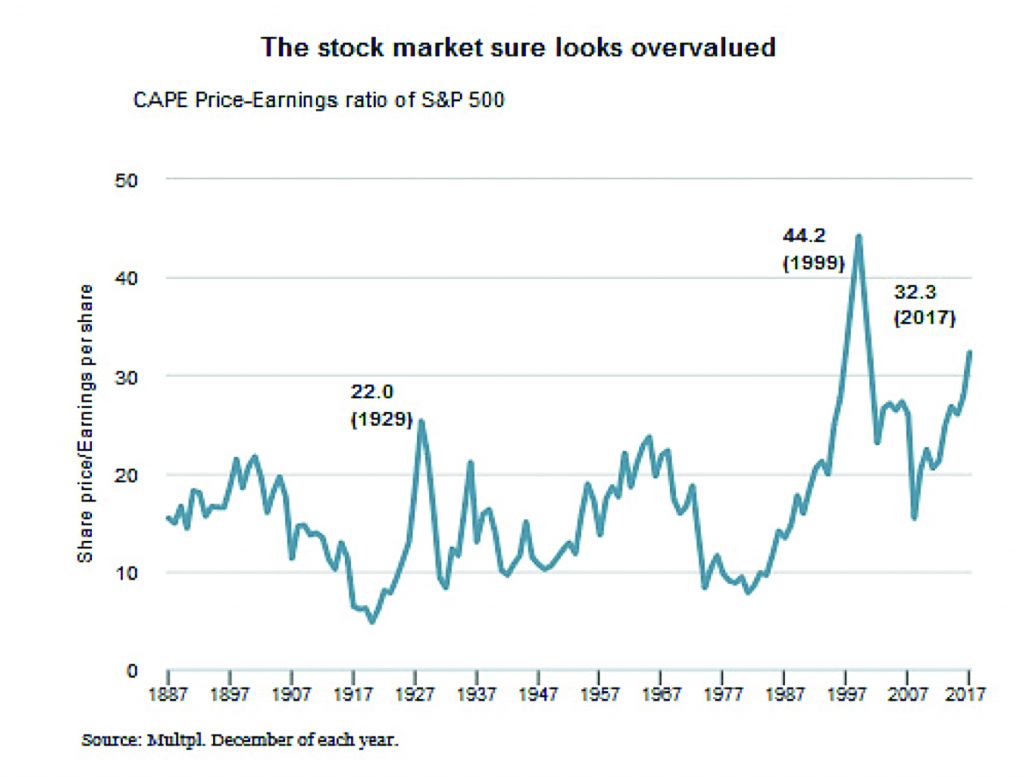 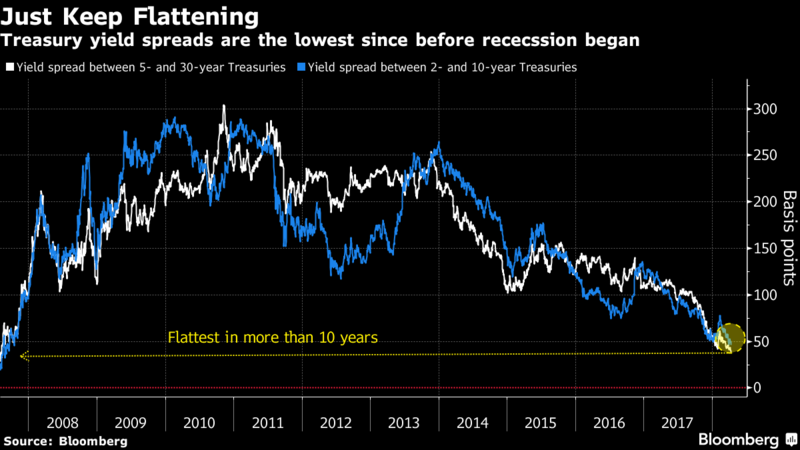 This flattening can make investors nervous since it may be an indicator that economic expansion is decelerating. A flattening yield curve can precede an inversion (when short-term rates are higher than long-term ones), something that “has historically been a warning sign of a coming recession and bear market for stocks,” reports ETF Trends.

Such a phenomenon is rare—and can spell bad news. It happened prior to the Great Recession as well as the 2001 downturn, reports CNN Money.

This evidence, and more, suggests that 2018 could see rapidly falling markets and central bank panic. If stocks get spooked or turn volatile, look for a rush to gold to offset market losses.

Markets may already be on their way down. The Dow plummeted more than 3,200 points, or 12 percent, in just two weeks in February 2018, then tumbled another 680 points in the month’s last two days, reports CNN.

Then in the last week of March, the Dow and S&P dropped 5.7 percent and 5.9, while the Nasdaq pulled back 6.5 percent, notes CNBC.

“We are in bear market territory now and it hasn't fallen 20 percent but it likely will. The question is,” says Forbes' Clem Chambers, “will it do so in a crash or a ghastly slow drawn out grind?”

Either way, “My money is still on a crash,” says Chambers. “In a world where markets are caged by regulators regulating, those regulators are not going to let go of their control without a hard fight or sudden fright.”

>> Download our latest eBook, 2018 Annual Gold Global Forecast, to find out why such conditions have historically meant a windfall for gold owners.

The Federal Debt Keeps Ticking Up.

Are We in for a Scare?

For the first time in history our federal government has more than $20 trillion in outstanding debt—and it's not just the government's debt. The national debt is, in part, the money that each of us owe a portion of as a taxpayer whether we like it or not, and it’s a big number that affects everybody in one way or another.

“A ballooning budget deficit combined with a rising current-account deficit are raising the odds the U.S. could suffer an emerging-markets-style debt crisis,” warn analysts at Deutsche Bank.

A debt crisis occurs when a country is perceived as no longer able to meet its debt obligations. The Bank's model calculated that the probability of a U.S. debt crisis has increased by 7 percentage points, from a historical average below 9 percent to around 16 percent.

Everyday citizens could expect to feel the pain of the federal debt in 2018 through higher taxes, rising interest rates, lower standard of living, weaker job markets, and less income.

Protecting yourself from such economic uncertainty means diversifying away from assets that move in parallel with the dollar, especially paper-based assets. Research suggests that gold can have an inverse correlation to stocks, bonds, and sometimes other commodities like oil. Even when the dollar tumbles on world markets and foreign currency prices go haywire, gold has been known to retain its standing in dollar terms.

Gold has long been a sweet spot in a debt-fueled environment of declining national savings, greater risk, and wavering confidence.

>> Don’t forget your free eBook, which includes everything you need to know about the power of physical gold in turbulent economic times.

The Cryptocurrency Buzz is Waning.

There was a time when you could hardly go a week without hearing about cryptocurrencies. They're up, they're down, then someone invents a new one. Out of the nine biggest digital ICOs (Initial Coin Offerings), eight of them took place in 2017: Filecoin, Tezos, EOS, Paragon, The DAO, Bancor, Polkadot, QASH, and Status.

But things are about to get dicey for cryptocurrencies.

“So far governments have largely ignored digital currencies, in terms of exercising their regulatory authority,” says Philip N. Diehl, president of U.S. Money Reserve and former director of the U.S. Mint. “Sooner than later, that will end. Probably sooner.”

“Sooner” has arrived. Cryptocurrencies are set to face some hurdles in the latter half of 2018. Bolivia, Ecuador, Kyrgyzstan, Bangladesh, Nepal, and Morocco have already banned bitcoin outright. China has outlawed ICOs, closed exchanges, and is actively working to shut down bitcoin miners.

More governments may see cryptocurrency as a threat to state currencies, monetary policy, and economic stability. If so, you could see more cryptocurrency miners abandon digital money and turn back to the only global currency that has stood the test of time—physical gold. Gold has outlasted every government and paper form of money. There's no reason it couldn't outlast cryptocurrencies, too.

This is the Year to Own Physical Gold

We've shared a sampling of our Annual Gold Global Forecast, but there's so much more to know. These aren't the only risks worth watching. What about Trump and Putin? Tax reform? A weak U.S. dollar? Trade wars with China?

The year 2018 may prove to be one of the most important years to buy gold.